The use and abuse of the Kurds

Why we must oppose Turkey’s outrageous assault on Afrin. 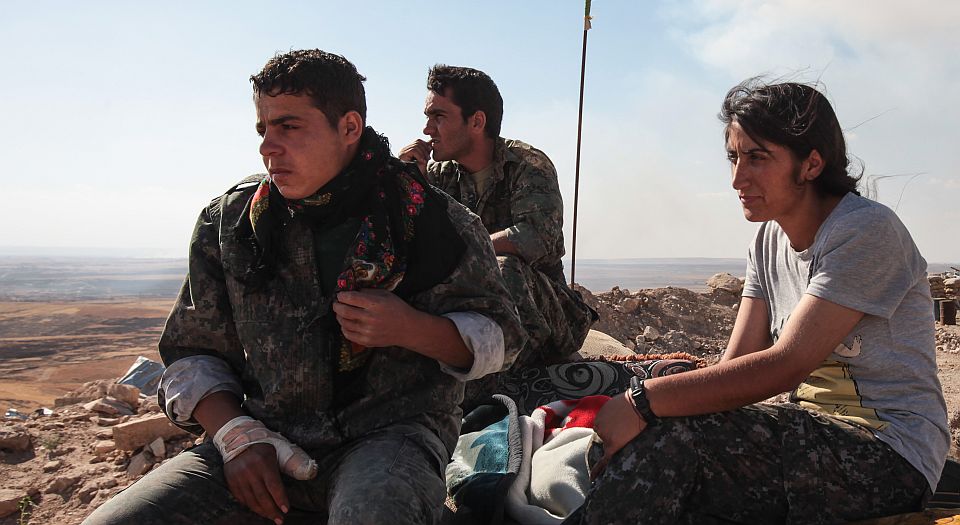 It was notable, last September, that it was the Syrian Democratic Forces (SDF) who finished off ISIS in Raqqa, the one-time centre of the would-be Islamic State. Notable because, despite the name, the SDF are led and dominated by the People’s Protection Units (YPG), a Kurdish militia that operates in Syria and is said to be associated with the Kurdistan Workers’ Party (PKK), present but outlawed in neighbouring Turkey.

It was not a surprise that it was the Kurds to the fore in what was a signal victory against the rapidly diminished ISIS, even issuing a ‘surrender or die’ order to the beleaguered jihadists. This has been the recurring theme throughout the battle against ISIS in both Syria and Iraq. Where state armies have flailed and failed, and where armed, largely jihadist groups, cobbled together by the US and its allies, have turned coat, taking the money and arms with them, the Kurds in both northern Iraq and Syria have bravely and doggedly led the charge against ISIS.

And in doing so, they no doubt believed they could consolidate their domestic positions, and perhaps even further their aspirations to statehood. After all, they weren’t just rolling ISIS out of key areas and towns – they were also taking those areas for themselves, as happened in oil-rich Kirkuk in Iraq in 2014, and much of north-eastern Syria. Backed by the West, the Kurds were doing well. But that was when the war with ISIS was at its peak. Since ISIS’s dramatic retreat back into the shadows, emerging every now and again to launch an opportunist attack or raid, the Kurds have found the ground shifting beneath their feet. They have discovered that those in the West who backed them in war, have deserted them in its aftermath.

This has allowed the revival of old regional enmities. For those who had put their antipathy towards the Kurds’ political aspirations on hold during their battle with the black-clad jihadists have now reasserted it with a vengeance. In September and October last year, the Iraqi state effectively punished the Kurdish Autonomous Region for staging an independence referendum by launching a military attack, retaking Kirkuk and other towns taken by the Peshmerga in 2014. And now, in Syria, Turkey has commenced a military operation against the YPG on the pretext that they are nothing more than terrorists.

On Saturday, Turkish F-16s and artillery units hit about 200 targets in north-eastern Syria before Turkish soldiers ventured three miles into Syrian territory to move into the Kurdish/SDF-controlled town of Afrin. The rhetoric from Turkish president Recep Tayyip Erdogan has been predictably pugnacious. ‘We are determinedly taking steps against the terrorist organisation [the YPG] and we will continue’, he said, adding ominously: ‘It is out of the question to make concessions on this.’

Indeed. The Turkish government has said that it will continue its military operation in Syria with an offensive against Manbij, a Kurdish stronghold on the Euphrates River. And it will do so, it says, fully justified under United Nations Security Council Resolutions 1624, 2170, and 2178, which purportedly allow it to intrude into another state territory – Syria – in the name of self-defence and anti-terrorism.

It’s a shameful and largely opportunist act by a state that was all too willing to tolerate the real terrorists of ISIS criss-crossing its border with Syria so as to keep the Kurds in check. Yet, as unforgivable and inflammatory as the Turkish state’s actions are, waging war on those who have given so much in the battle against ISIS, they are neither surprising nor unprecedented. Since 2015, Turkish planes have been bombing Kurdish forces in Syria, mirroring the Turkish military’s equally brutal operations against the Kurds within Turkish territory.

Perhaps more shameful has been the response of those in the West who have been happy for the Kurds to do their dirty, bloody work for them over the past four years; those, that is, in the US state who, when confronted by Turkey’s latest military offensive could barely muster a word in favour of their Kurdish allies. Instead they sided with their NATO ally, Turkey. So just as the US and its allies responded to Iraqi Kurds’ stab for full independence with condemnation and threats to withdraw all support, so the US has responded to Turkey’s assault on Kurdish forces with a call for ‘Turkey to show restraint and ensure its military operations remain limited in scope and duration and scrupulous to avoid civilian casualties’. Which is akin to telling an assassin to do it cleanly.

What makes America’s position worse is that it helped exacerbate this current phase of the Turkey-Kurd conflict when it announced in December that it was developing an expanded training programme for Kurdish and Arab border guards in Syria to prevent the resurgence of ISIS. When Turkey reacted with predictable anger, US secretary of state Rex Tillerson simply caved in, and denied that a Kurd-dominated border force was being developed at all, despite the SDF reporting that its creation was in process. Erdogan’s animus towards the Kurds has therefore, incredibly, been compounded by the US administration’s combination of diplomatic cluelessness and outright cowardice.

Make no mistake, here: the Kurds have been used. Not by Turkey, or Assad’s still standing Syrian regime, or even by Iraq and Iran. All those states were always opposed to the national ambitions of the Kurds because of their own restive Kurdish populations and the prospect of territorial loss. No, the Kurds have been used, as they have so many times before, by Western powers.

After all, it was the US that armed and backed the Kurds; the US that offered air assistance; the US that urged the Kurds on in both Iraq and Syria. And in return the Kurds have been willing to lay down their lives. Not without self-interest at play, of course. They saw it as a chance, not to mention a necessity, first to protect themselves, and second to consolidate and advance their national cause. But that was why they were prepared to fight ISIS with such conviction in a way that the highly paid, US-trained soldiers of the Iraqi army, or the US-backed ‘moderate’ jihadists of Syria, were not. Because the end for which the Kurds fought mattered; because the idea of a Kurdish state was worth fighting for.

But the problem all along was that the Kurds’ ends were always very different to the West’s. The Kurds were useful, yes, but only as a means, a fighting force against ISIS, and not as ends in themselves. The West wanted the Kurds to help stabilise the region, not reorder it. In fact, the US was always at best ambiguous about the ambitions of the Kurds – hence, like the UK, it has long followed Turkey’s lead and classified the PKK as a terrorist group, up there with al-Qaeda and, yes, even ISIS itself. So, as soon as the war against ISIS had turned inexorably in the West’s favour, and the Kurds ceased to be useful, they were cast to the wind. Just as in 1920, when the British state reneged on a promise to grant the Kurds territory in favour of a treaty with Ataturk’s fledgling Turkish state, when the Kurds stop serving a purpose they are ruthlessly, blithely betrayed.

The irony, of course, is that the very thing that makes the Kurds such a formidable fighting force – a commitment to a cause, to a nation yet-to-be – and their confident, brave assertion of that cause are the reasons why they never garner the support they deserve in the West. That’s because the cause of national self-determination, and the robust willingness to fight for it, has long been denigrated by Western elites. The Kurds might well have been better off losing to ISIS, and becoming something that the West finds no difficulty in supporting: victims. But then, that is both the Kurds’ biggest problem and their strongest virtue – their willingness to fight for the very thing too many in the West no longer believe in: nationhood.