Trump and his haters: battle of the vanities

Both sides in the spat over his UK visit are more into preening than politics. 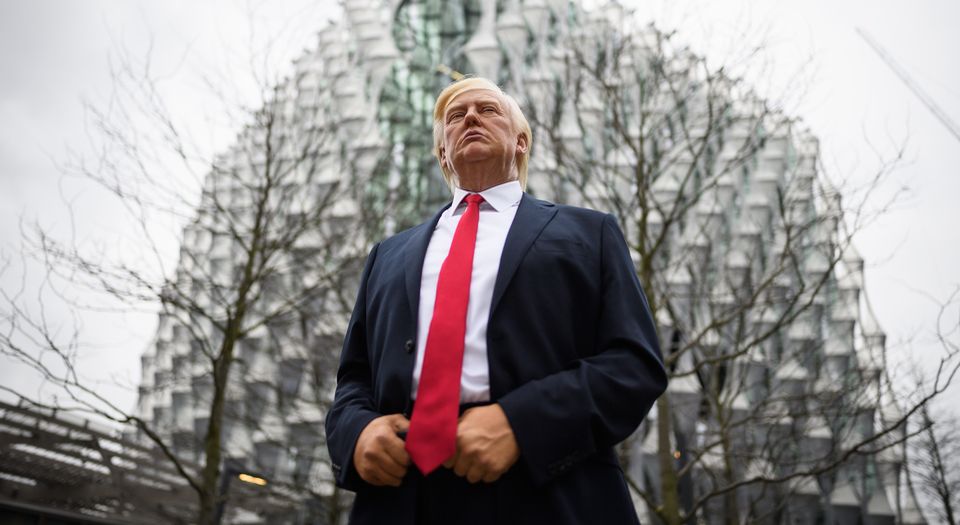 You can’t fault the chutzpah of President Trump. No matter how fathomless his ignorance, he steadfastly refuses to let it get in the way of political decisions or, as he calls them, tweets. So it was that he cancelled his ‘working visit’ to the UK to open the new US embassy last week, because, as he put it, ‘I am not a big fan of the Obama administration having sold perhaps the best located and finest embassy in London for “peanuts”, only to build a new one in an off location for 1.2 billion dollars’. There was even the trademark campy and childlike flourish: ‘Bad deal. Wanted me to cut ribbon – NO!’

As everyone with access to the internet has now pointed out, of course, Trump was once again using the wrong hole with which to speak. He is right to say the US embassy has moved, which is why, as he himself adduced, he was pencilled in to ‘cut ribbon’. But the decision to sell off the US embassy in London’s posh Mayfair for ‘peanuts’ – £500million worth of peanuts as it happens – and move to Nine Elms across the River Thames was not Obama’s. It was made in 2008, under the adminstration of George W Bush. The rationale for the move was of the Bush Jr era, too: the threat of terrorism, something the swanky but old Mayfair address could not be secured against in the same way as a purpose-built embassy in regenerated Nine Elms.

So far, so characteristically imbecilic, right? Well, not exactly. It seems unlikely that Trump’s decision was really driven by what he mistakenly thought was a bad real-estate deal. Rather more plausible is the suggestion of The Sunday Times that Trump’s decision was driven by his one overriding characteristic: vanity. He simply couldn’t stand the thought of a low-key visit to the UK and the baracking of a bunch of protesters, spurred on by assorted, largely Labour politicians. Or as The Sunday Times’ source put it, Trump wasn’t feeling ‘enough love’.

Moreover, such is his thin skin that the prospect of his arch enemy Obama then heading over to the UK to attend this summer’s royal wedding at the personal behest of Harry and Meghan, while he is left to skulk uninvited and unwelcome in the shadow of Battersea Power Station, with nary a crumb from the queen’s table, was no doubt too much to take. So he reached for his petty partisan default – to bash Obama – because he couldn’t stand the thought of not having the world, or in this case the British state, affirm his self-image, as a brilliant, massively important, world-historical figure.

Yet this narcissism cuts both ways. For every one of Trump’s increasingly desperate attempts to have reality conform to his self-image, to have the world mirror his view of himself as a stable genius, worthy of dinner with the queen and a cheering throng of Anglified Trumpsters, there is an increasingly smug attempt by British politicians and activists to use Trump, his idiocy and wretchedly non-PC persona, to affirm their own self-image, to affirm their view of themselves as good, virtuous people. Both sides are concerned not with the diplomatic function of the American president in itself, but with how they can use that visit to say something about themselves: Trump wants it to make Trump great again; his opponents want it to make them feel right again.

Hence London mayor Sadiq Khan greeted the news of Trump’s cancellation as a vindication of his London, claiming it affirmed ‘our city’s values of inclusion, diversity and tolerance’ (excepting Trump, one presumes). Likewise, shadow foreign secretary Emily Thornberry, branding Trump ‘dangerous’, ‘a racist’, and an ‘asteroid of awfulness that has fallen upon the world’, was delighted that Trump wasn’t coming over for the time being – because his very presence would be embarrassing. And the Stop Trump Coalition, which had promised to stage a mass citizens’ arrest if Trump visited, celebrated ‘another HUGE victory for our movement’. In other words, if to accept Trump in the UK was an affront to ‘our values’, to our sense of ourselves, then his non-visit confirms and demonstrates our values, our sense of ourselves as morally superior to those from lesser nations who would shake Trump’s tiny hands.

Yet just as Trump warps reality to meet his insatiable need for self-affirmation, whether it’s through fighting baddies in the Middle East or evil in North Korea, so his critics warp the reality of Trump’s presidency to provide the vice to their virtue. He is transformed into the antithesis of their politically correct wordlview: a ‘racist’, a ‘mysogynist’, even an ‘asteroid of awfulness’. He exists to meet the moral needs of British politicians, and if he didn’t they’d have to invent him. Legitimate, sober criticisms of his presidency, from his reckless foreign policy to his feeble domestic agenda, are lost to the storm and stress of emotivism and moral self-aggrandisment. Thornberry or Khan or the Stop Trump Coalition seem to be more concerned with what dissing Trump says about their ethical awesomeness than with what it says about the actions and nature of the Trump administration itself.

All this testifies once again to the transformation and devaluation of what used to be known as statesmanship. It has become little more than a form of vainglorious posturing, a battle (and sadly not a bonfire) of the vanities. So while, historically, state visits, whether replete in pomp and ceremony or not, were always public affairs, they were also formal, resolutely impersonal affairs. Leaders were not there as celebrities to promote themselves, and state visits were not opportunities for individuals to convey their personalities to their world. Rather, they were treated as representatives of their nations, sometimes, like Trump, elected ones to boot, and state visits were chances to convey interstate relationships to the world. They were public, diplomatic affairs, not personal, reality-TV ones.

This is why the state visits of such a motley crew of individuals in the past were not met with anything like the pique prompted by Trump’s Godot-like visit – and remember these were individuals who had actually threatened the British state. So Emperor Hirohito of Japan could enjoy a state visit, complete with a confab with the queen in 1971, despite his complicity in Japanese war crimes against British (and other Allied) troops during the Second World War. And the then Romanian president, Nicolae Ceaușescu, could also enjoy an official state visit in 1978, despite being a Stalinist leader of a nation that, as a Soviet satellite state, was implacably opposed to the capitalist West. And yet their presence was not protested in the same way as Trump’s prospective presence is, because they were treated not as abhorrent individuals, to be booed like a Big Brother evictee, but as representatives of nations.

But then, that was an age in which Western politicians, still connected to the public, experienced an office of state as public service rather than an opportuity for personal advance. They were meant to represent the interests of the nation rather than the individual. Today it seems that even relations between nation states can be reduced to interpersonal posturing and preening. Yes, Trump really is so vain that he thinks this visit is about him. And his opponents think it’s all about them.