2017 made clear that Trump is no champion of the forgotten man. 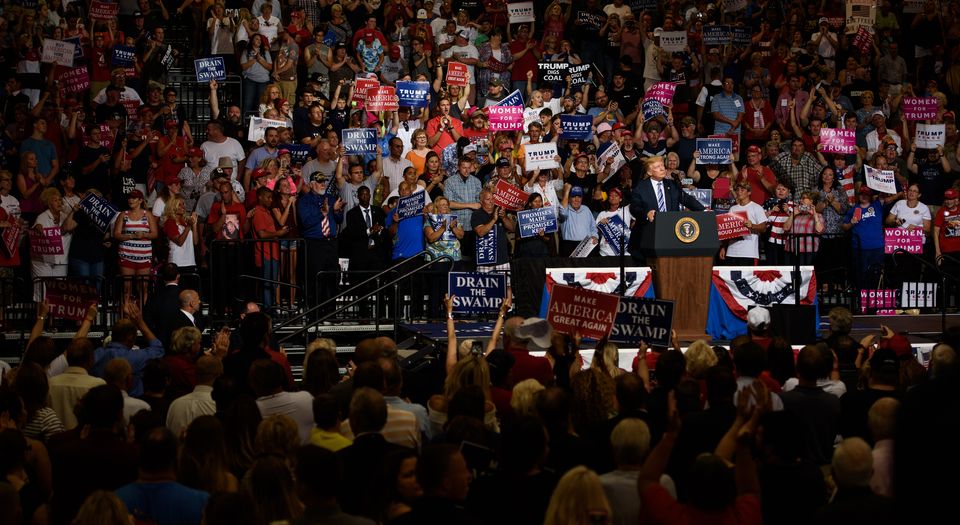 Donald Trump’s inaugural speech, back in January, seemed to be announcing a break with the past. Unlike former presidents who stood at the steps of the Capitol building, Trump’s style that day was bleak. He spoke of ‘American carnage’ in inner cities, ‘rusted-out factories scattered like tombstones’, and ‘crime and gangs and drugs’. He pinned the blame for this carnage on the establishment, on Washington DC – that is, the politicians sitting a few feet behind him.

You could be forgiven for thinking on that day that we were witnessing the birth of a new ideology – Trumpism. Trump’s speech hit on themes that challenged longstanding Republican Party orthodoxy. These included economic nationalism (‘We’ve enriched foreign industry at the expense of American industry’); restrictions on immigration (‘We will bring back our borders’); a non-interventionist, ‘America First’ foreign policy (‘We do not seek to impose our way of life on anyone’); and spending more government money at home (‘We will build new roads, and highways, and bridges, and airports, and tunnels, and railways all across our wonderful nation’).

Yet, very quickly after entering the White House, Trump ditched much, perhaps nearly all, of this supposedly path-breaking programme. His No1 campaign promise – to build a border wall with Mexico – has disappeared. The NAFTA trade agreement remains in place. You could say that Trump pursued his ‘Muslim ban’, but it is temporary and limited. He promised to keep the US out of wars, yet he bombed Syria (using the same ‘humanitarian’ rhetoric as his predecessors), sent more troops to Afghanistan, and made reckless threats against North Korea. And he no longer talks about rebuilding infrastructure.

Trump also made a big pitch to working-class voters during the election campaign. In the event, support from sections of the working class in Rust Belt states helped him prevail over Hillary Clinton. He even spoke of his dreams to remake the Republican Party into a ‘workers’ party’.

As his inaugural speech last January indicated, this ‘populist’ appeal to the masses was also a key component of Trumpism. Unlike traditional Republicans, Trump claimed workers had been screwed over (‘The factories shuttered and left our shores, with not even a thought about the millions upon millions of American workers left behind’), and promised to rectify their plight (‘We will bring back our jobs… We will get our people off of welfare and back to work – rebuilding our country with American hands and American labour’). And, beyond jobs, he promised to do something the elites of both parties had failed to do: recognise and listen to the mass of people (‘You will never be ignored again. Your voice, your hopes, and your dreams will define our American destiny.’)

But, as is the case with other aspects of the supposedly Trumpist agenda, this populist pitch was also exposed as so much hot air in less than a year. Trump has operated as if the working-class doesn’t exist.

He embraced the Republicans’ proposed replacements for the Obamacare health system, even though they meant fewer people covered and more expensive plans. He has also backed the congressional GOP’s tax bill, even though it does nothing for the people who got him elected (but does a lot for those who don’t want to pay inheritance tax). Trump’s first big legislative ‘win’ will be a loss for ordinary people.

And what of the jobs he promised to bring back? Participation in the labour force is still low by historical standards (unemployment statistics are misleading in this regard), wages have stagnated, and factories have not returned. On the campaign trail, Trump told people in the Rust Belt: ‘Don’t leave! I will bring jobs back so fast.’ That message resonated. But now he has changed his tune. Trump recently told the people of upstate New York that if they want jobs, they have to move: ‘When you have an area that just isn’t working like upper New York state… I’m going to explain, you can leave. It’s okay.’

After less than a year of Trump being in office, it’s clear that Trumpism is dead. The promises he made on his inauguration day were always shallow. He does not espouse a coherent, alternative set of ideas, nor is he pursuing a radically new political programme.

While Trump can still make populist noises from time to time, these are increasingly seen as empty and self-serving. His undisciplined, cavalier approach does not mark a new beginning to American politics. Instead, it represents a continuation of the visionless political class of recent years, just in a more degraded form. Trump owes everything to the collapse of the establishment, and continues to feed off it; his survival has nothing to do with his own political talents or ideas. He is not much more than a disruptor, a knocker-down of the already faltering elites, and provides nothing sturdier or lasting to put in their place.

Meanwhile, as Trumpism has disintegrated over the past year, the sentiments of the voters who put Trump in office – their desire to reject the establishment and conventional politics, to gain recognition and improve their lives – have not gone away. Their needs are not being met, and Trump has abandoned even the pretense of trying to do so.

‘20 January 2017 will be remembered as the day the people became the rulers of this nation again’, said Trump at his inauguration. ‘The forgotten men and women of our country will be forgotten no longer.’ What a crock. Trump has forgotten the people who elected him, but they have not forgotten what they were promised.