Devin Kelley was evil, but he’s not a terrorist

The problem with using the T-word for mass shootings. 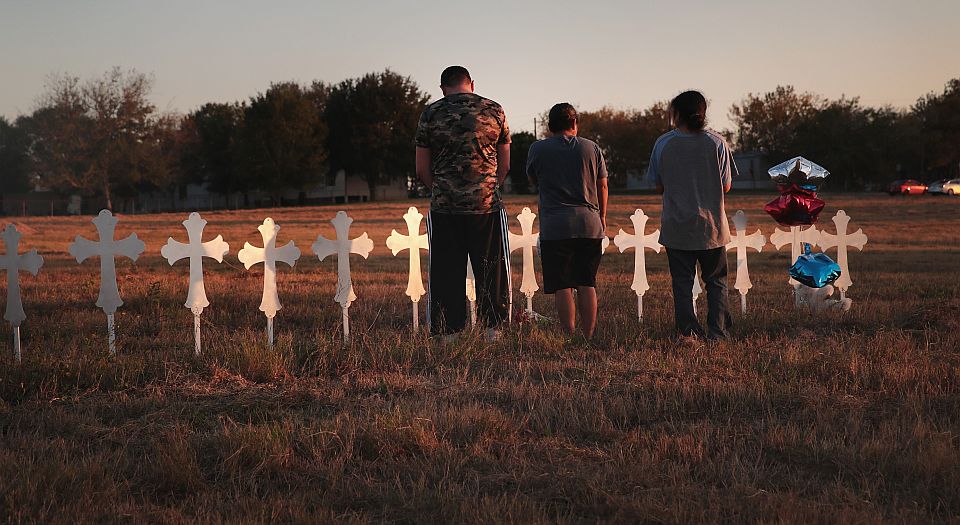 When Devin Kelley opened fire on parishioners at the First Baptist Church in the town of Sutherland Springs, Texas, he committed an act of almost unspeakable evil and devastation. He killed 26 people, and wounded 20 others. The youngest victim was just 18 months old, and eyewitnesses suggest he purposefully targeted children – at least a dozen are among the dead. He killed seven per cent of the Sutherland Springs’ population in his bloody, 10-minute-long rampage, before he was engaged by armed residents and took his own life.

The bodies were barely cold before some were trying to use them as political fodder. I’m not talking about the gun-control debate. That’s inevitable. And as much as spiked supports the right to bear arms, and as moralistic as some on the gun-control side can be, it’s wrong to suggest that in the wake of such slaughter everyone should just offer their thoughts and prayers and be done with it. (Given that, due to his past convictions, Kelley should never have been able legally to purchase the weapons he used in the attack, there are questions to be raised about enforcement, if nothing else.)

No, the politicisation I’m referring to is something far more grim. A tendency that doesn’t seem to care about the case at hand at all, and would rather wrench it out of its context to score points about something entirely different – that is, the tit-for-tat over what is and isn’t terrorism that now greets every act of mass slaughter.

Coming just a week after the Islamist attack on Lower Manhattan, many were quick to ask why Kelley’s attack wasn’t being treated as terrorism. ‘Had the Texas shooter been Muslim, our brave political officials would have immediately stepped up to the microphone to explain how they planned to fight terrorism here and abroad’, wrote one commentator. ‘If it’s a white dude it’s mental illness. If it’s a brown dude it’s a terrorist’, tweeted another.

This kind of cynical pointscoring has almost become as prominent in the wake of mass shootings as the gun-control debate itself. The argument is now trotted out so robotically that many fail to realise how ghoulish and idiotic they’re being. GQ ran a headline last week asking why Trump called for the death penalty for Manhattan attacker Sayfullo Saipov and not for Las Vegas mass murderer Stephen Paddock. It has since issued the following correction: ‘That discrepancy is probably related to the fact that the Las Vegas shooter is dead. We regret the error.’

Though it shouldn’t really have to be said, there’s a difference between vicious, evil mass shooters and vicious, evil terrorists. The US Code of Federal Regulations defines terrorism as violence designed to ‘intimidate or coerce a government, the civilian population, or any segment thereof, in furtherance of political or social objectives’. Devin Kelley had no such objectives. By all accounts he was an embittered, violent individual. A few years ago he was institutionalised for threatening his airforce superiors and then discharged from the airforce for abusing his wife and cracking his baby stepson’s skull. Though the investigation goes on, it seems he targeted the church because his ex-wife’s family attend it (he killed her grandmother in the attack).

After an Islamist attack, there is no such ambiguity nor mere personal grievances. Notes, videos and statements are found, pledging allegiance to the Islamic State. And many of those now criticising people for supposed double standards over terrorism, go out of their way to ignore this. As one writer put it in Slate this week, there is a kind of wilful naivety after Islamist attacks among so-called liberals. Even when a truck is ploughed into pedestrians – echoing recent jihadist attacks in London, Nice and Barcelona – they refuse to make the connection. Even after Saipov was reported to have shouted ‘Allahu Akbar’, one tweeter said ‘COME ON. MUSLIMS SAY THIS EVERYDAY IN PRAYER.’

These people aren’t interested in calling out all ‘terrorism’ – they want to downplay one form of it while calling it out where it doesn’t exist. And in this they’re far guiltier of double standards than the right-wingers they posture against. Do these people seriously think that if Stephen Paddock turned out to be an ISIS convert – as, at one point, was being claimed – that Trump or whoever else would play it down? Of course not.

Trump’s Twitterfingered critics are the ones racialising these attacks, turning them into questions of white slaughter vs brown slaughter, rather than ideological (ie, Islamist) slaughter vs mindless, nihilistic slaughter. And just as they seek to downplay the Islamist threat, they’re more than happy to take white lone shooters at their word when they try to dress up their deeds as some kind of bizarre political campaign in later-found manifestos and screeds.

There’s a debate to be had about where we draw the line between lone-wolf violence and organised terror. Many Islamist killers, like Saipov, act on behalf of and are claimed by ISIS even without there being much contact between them. And while the likes of Kelley may have acted without a political motive, others, like the despicable Dylan Roof, who killed nine black parishioners in a church in Charleston, South Carolina, do claim one – he said he wanted to incite a race war. It’s also true that, according to one study, there were more white-supremacist than Islamist terror plots in the US between 2008 and 2016 (though the Islamist attacks claimed more lives).

But most of these people aren’t interested in having that debate. If anything, the ‘this is terrorism, too’ reflex is an attempt to deflect debate, to cloud it in virtue-signalling and easy moralism. Why? Because the facts at hand are too uncomfortable for many supposedly liberal types to bear.

For all the free-floating, networked nature of modern jihadism, for all the parallels one might draw between isolated Muslims and isolated white men being drawn to nihilistic slaughter, it’s clear where the real violent political threat comes from today. Though since 9/11 America has been spared the kind of constant battering Europe has endured, there are networks, groups and individuals organising to kill Western citizens, or inciting loners to do the same, on a scale that is incomparable to that of marginal losers and violent racists.

To ignore the Islamist threat, to obscure it, to pretend you can find its exact mirror image in the backwoods of America, all because it doesn’t suit your neat political agenda, is an act of intellectual cowardice.

This is not a question of what the state, the law, or those in the security services deem to be terrorism. Indeed, in pushing for the term to be applied so liberally, the ‘what about white terror?’ set risk empowering the state, green-lighting more powers to strip civil liberties and snoop on citizens. No, the debate over terrorism is important because it is, at its heart, a discussion about where the real threat lies, where our political and moral resources need to be deployed in order to stand up for our societies and way of life.

Some might want to ignore it, but the rest of us can’t afford to.