The EU is tearing Spain apart

Catalonia’s drive for independence is driven by the EU’s anti-nation elitism. 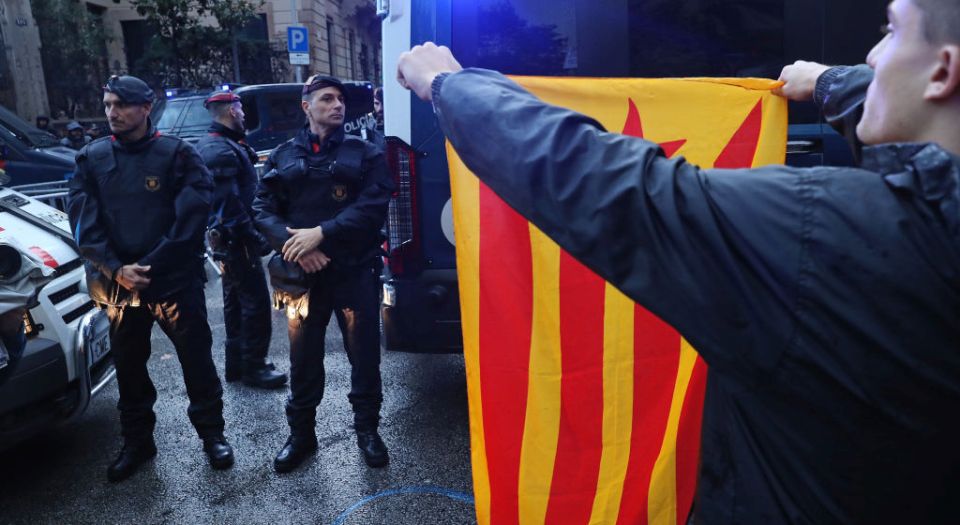 An excessive focus on history can obscure the real dynamic informing the Catalonia autonomous community’s push for independence from Spain. It makes it look as if what we’re seeing now is a revival of a longstanding strain of Catalan nationalism, drawing on its 12th-century legacy as a principality, fired up by the divided union of Aragon and Catalonia during the early modern era, and burnished with the left-wing romance of Catalonia’s stand-alone, red-and-black resistance to General Franco during the 1930s. It makes it look, ultimately, as if Catalonia is not only an entity distinct from the rest of Spain, but also a victim of, if not Spain, than certainly the Spanish state.

Not that matters have been helped by the Spanish government’s brutal, anti-democratic response to Catalonia’s independence referendum, as unconstitutional and therefore illegal as it was. It merely reinforced the impression that this is a conflict between an oppressive state and an oppressed people. After all, such is the defensiveness and weakness of the Spanish political class, we saw armed units of Guardia Civil assaulting Catalan voters, forcibly shutting polling stations and confiscating ballot boxes, and now we see charges of rebellion and sedition being laid at the doors of the leading pro-independence Catalan politicians, which has even prompted the Catalan president Carles Puigdemont to flee to Brussels. This really does look like a conflict rooted in some longstanding desire of the Spanish state to bend the Catalans to its will.

But to think that misses the real catalyst for the Spanish crisis, which lies less in Madrid or Barcelona, than in the European Union’s HQ in Brussels. That’s because, in the EU’s flight, manned by Western Europe’s political classes, from the democratic accountability of national peoples, in its demonisation of the very idea of national sovereignty as a species of 1930s-style nationalism, indeed in its essential anti-national elitism, it has created a transnational, technocratic set of institutions that necessarily weakens national state structures, depriving nations of numerous lawmaking powers, border controls and economic independence. Admittedly, the Spanish nation state has never been particularly strong. In common with the rest of Europe, its party-political system is in disarray, with its two traditional behemoths, the Socialist and Popular parties, hollowed out, and populist rivals exploding on to the scene. And, specific to Spain, the state has failed properly to cohere itself as a state, with suppressed regional antagonisms re-emerging in the post-Franco era. But the EU has not only exacerbated the internal weaknesses of the Spanish state; it has also fundamentally undermined even the possibility of a functioning nation state.

Not that the EU’s corrosion of nationhood is enough by itself to have prompted the Catalan push for independence. It created the conditions – an enfeebled, desperately weak state, and a politically disempowered populace – but it didn’t by itself generate the spark. That was provided by the economic crisis of 2008, which led to the collapse of Spain’s property-fuelled credit bubble, and the previously flourishing construction industry. Because as soon as the mirage of economic boom gave way to the reality of long-term bust, the weakness of the state, and especially its lack of economic independence, became a problem. It meant that despite the desires and wishes of the Spanish people, the state could do nothing but attempt to enforce the EU’s harsh austerity regime. So, the economy fell into recession in 2009 for the first time since the early 1990s, and again in 2012. Unemployment increased at an unprecedented rate, doubling over the course of 2009, and reaching 24.4 per cent by 2012, twice the eurozone average. And youth unemployment reached a staggering 50 per cent by the 2010s. Yet, all the Spanish state could do, especially after an EU bailout package in 2012, was continue to make cuts to state spending, while simultaneously trying to repay its EU debtors. Any deviation from the the EU’s austerity programme was met with the threat of financial punishment, as the Spanish government found out in 2013 when it was ordered to re-write its national budget after its plans failed to meet the EU’s spending targets.

But the EU’s from-on-high, remote-control governance doesn’t simply corrode national state structures, and ride roughshod over people’s wants and desires; it also ultimately divides a nation, fragments a people; it fosters grievances, resentments, bitterness, not least in the economic sphere; it can prompt the relatively well-off to wonder why they’re paying ever higher taxes for so little return; it can turn richer regions against poorer ones; and it can prompt people to look for ways to regain some semblance of control over their affairs – or, more accurately, in the case of Catalonia, to protect their economic privilege.

Because while Catalonia has been affected by the economic crisis and EU-driven austerity measures, it has not been affected to the same degree as the rest of Spain. It remains, with Barcelona its bright, shiny, prosperous symbol, one of the wealthiest regions in Spain. Hence, when pushed, the chief complaint made by pro-independence supporters is that Catalonia pays far more in taxes to the Spanish state than it gets in return. They are not seeking independence because of some deep desire for self-determination, exactly – after all, Catalonia, as a constitutionally ‘autonomous region’, has control over many of its internal affairs, aside from taxes, immigration and defence. Rather, they are seeking independence because of a desire to protect their wealth.

Yes, the cultural distinction between Catalonia and the rest of Spain has come to the fore in recent decades, with the red-yellow-and-blue Estelada a familiar sight hanging from buildings, and Catalan a familiar sound on the streets. But it’s clear that the driving force is less cultural difference, no matter how divisive, than the experience of EU-driven austerity as an unnecessary drain on an economically rich region. This is why support for Catalan independence has only risen dramatically since the economic crisis. As the Financial Times puts it: ‘After decades during which Catalan support for independence hovered between 15 and 20 per cent, secessionist sentiment started climbing rapidly in 2009. By 2011, according to the closely followed survey by the Catalan Centre for Opinion Studies (CEO), support for independence was above 30 per cent. Two years later, it reached an all-time high of 48.5 per cent.’

This is not a uniquely Spanish phenomenon, either. In other EU member states, the same dynamic is at work, with richer regions or areas with a sufficiently distinct cultural identity seeking to unfasten themselves from the rest of their respective nations. You can see it in the desire for greater economic autonomy of the rich Lombardy and Veneto regions in northern Italy. And you can see it again in Belgium, with the wealthy northern region of Flanders continually seeking to decouple itself from the de-industrialised, relatively impoverished southern region of Wallonia.

There is nothing positive about these drives for independence, quasi or otherwise. They are principally drives to protect economic privilege, justified through a divisive championing of cultural distinction (which all too easily turns into the denigration of those from whom they claim to be so distinct). But more importantly in the case of Catalonia, there is not even a popular mandate for independence. The most significant aspect of the independence referendum was not the 92-to-eight per cent split in favour of independence; it was the fact that only 43 per cent of the electorate turned out to vote. That almost all of those not voting were against independence is likely given that they, like the Spanish state they support, would have deemed the vote unconstitutional. Little wonder that polls from both before the referendum and after, despite the actions of the Spanish state, continue to show that the majority of Catalans still support a unified Spain – support writ large in the huge pro-unity march in Barcelona this weekend.

And that is something to be cheered. Because there is a fight to be fought, not for Catalan independence and the protection of privilege and wealth, but for popular unity against the EU – the disenfranchising, disempowering and divisive source of Spain’s political, social and economic ills. A fight, that is, to regain the powers that have been outsourced to the rule-governed technocrats in Brussels. A fight that should not be Spain’s alone.