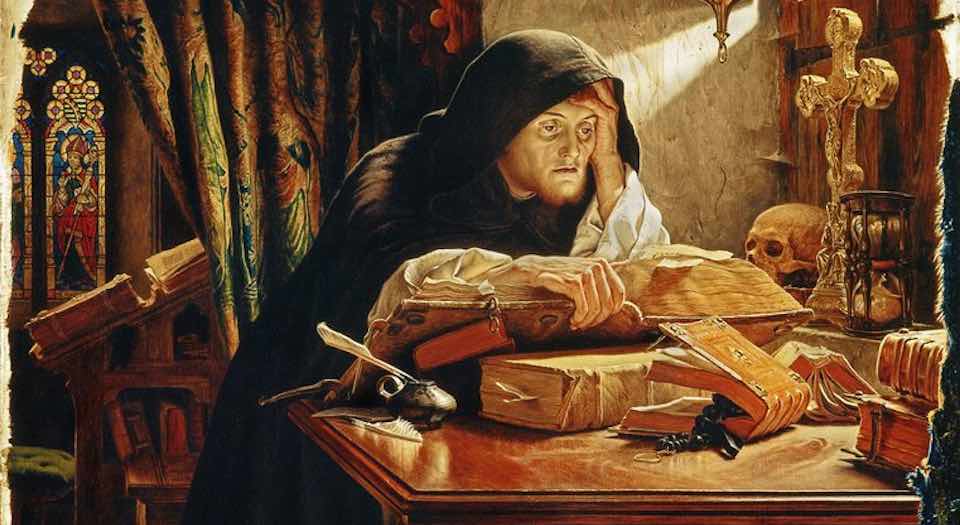 At the heart of the Reformation lay the development of our inner moral voice.

In his Lectures on the History of Philosophy (1805), Hegel argues that Luther’s great insight is that individuals should find themselves at home in the truth. Truth should not be something that is externally imposed upon us, prescribed from without. It should not only be experienced as out there, in doctrine, scripture, or injunction, but also as something inner, internal to the individual. The truth should be something that we recognise, feel, and believe to be our truth.

Luther, in this sense, is the culmination of a process that began in Ancient Greece, whereby the question of conscience, of right conduct or right knowledge, became increasingly inner, and increasingly freed from external impositions. This occurred through a series of conflicts between individuals and social authorities.

The question of wrongdoing was at first an external matter: in primitive law, the harmful act is considered as a disruption or pollution, and atonement takes the form of compensation or magical acts to remove these physical consequences. Indeed, crime in Greece retained a pseudo-physical element: the criminal courts were religious sites and crimes were atoned for not only by punishments but also by religious rites, to remove the contamination that had been created. The question of right conduct was also deeply reliant on external guidance, with citizens or army generals alike posing questions to oracles or seers and following their prescriptions.

In Moral Conscience Through the Ages (2014), Richard Sorabji points out that there was a shift in Greek drama in the 5th century BC, from a more external to a more internal view of events. In Aeschylus’ early telling of a young man’s (Orestes) killing of his mother, the young man’s wrongdoing is made clear through his pursuit by the furies: his wrongdoing takes an external form. In Euripides’ later version, however, Orestes ‘shares knowledge with himself’, and Orestes is about his own view of his actions. His matricide was ordered by an oracle, to avenge her murder of his father, but it goes against his sense of right: ‘I can’t believe that what the god told me is right.’ The consequences of his murderous act are less the practical ones (of the impending trial, or communal punishment) than Orestes’s and his sister Electra’s realisation of their wrong. The torment is a subjective one:

‘O Phoebus, in the command of your oracle
Justice was hidden from me;
But in its fulfilment
You have made torment clear.’

Here, we see individuals start to develop their own standards of right, their own inner source of guidance and principles. At his trial for impiety, Socrates defended his personal ‘daemon’ against the public pressure and customary morality of the city. He had what he called a personal ‘prophetic voice’ or ‘divine sign’, and it was this that he looked to for instruction: ‘I will obey my god rather than you.’ In Socrates, the guidance of the oracle has moved internally, into a voice that he hears in his head. In his trial speech he described this as ‘a sort of voice which comes to me’. The voice dissuaded him when he was about to do the wrong thing, and appears to have given largely practical advice – when to cross the river, or not to get up because a certain person was about to come into the room. In Socrates’ inner voice, his daemon, we see the nascent form of a conscience.

And yet it retained many of the features of an oracle, in being a source of practical advice from some external thing, rather than a principled guide to truth or right. The daemon was heard in his head, but it wasn’t seen as properly inner (Plutarch concluded that it was ‘in contact with the head’ but not in the head). And the daemon had a negative rather than positive role, warning against actions rather than suggesting them: ‘When it comes it always dissuades me from what I am proposing to do, and never urges me on.’

After Socrates, another key step in the development of conscience was Saint Paul’s conflict with Jewish custom and with Rome in the 1st century AD. Paul criticised the legalism of Jewish ritual, its emphasis on rites and observances, and said that what mattered was not religious ritual but inner faith. ‘It is evident that no man is justified before God by the law’, write Paul. ‘The righteous man shall live by faith.’ With the development of early Christianity, the question is not your acts or observances, but your faith, your belief. The truth is something that must be felt as true; it must be experienced as something internal to the believer. You cannot just go through the motions.

The source of guidance now has lost all the features of being an oracle, of providing morally neutral practical advice. God, or Christ, becomes the ‘indwelling spirit’ within a person, and this has the significance of being the good and the truth. The believer is not separate from the source of knowledge or righteousness: he possesses ‘the mind of Christ’; ‘It is Christ speaking in me’. In conversion the believer takes Christ into himself, ‘puts on Christ’ – he has internalised the universal element.

Yet Paul’s conscience was largely a question of reception: the universal was assumed to be out there, and the role of the individual was to recieve it, open oneself up to it, thereby playing a largely passive role. Paul’s conscience was something that mediated the universal for the individual – that told him what the moral law was, and acquitted or condemned as he obeyed or disobeyed.

With Luther, the question of conscience became a properly individual matter. He made the independent, free conscience the basis of truth. Confronting the institution of the Catholic hierarchy built up over the previous 400 years, Luther freed the individual from the weight of social mediation and prescription, the laborious means by which people sought to obtain guidance or salvation through indulgences, confession and absolutions. Luther reduces things to a relation between the individual’s faith, and God. Consciences should not be ‘terrorised’ by the church, people should not be forced to go against their beliefs – but nor can they make amends for wrongdoing through a priest who deigns to say the words ‘I absolve you’. What matters is not what the priest says, but the individual’s belief: whether he or she desires absolution and believes that it will be given.

Unlike Paul, Luther’s concern is not with the Christian brotherhood or community, but with the fate of the individual soul, with his uprightness and righteousness. Religion is a thinking and working for yourself. Or as Luther put it, ‘It belongs to each and every Christian to know and to judge of doctrine’. Yet this is not akin to letting your whim or natural desires run rampant. Instead, the individual must put aside the selfish, partial, desiring aspect of him or herself, and build the universal within him or her. It is the work, the labour, of strengthening faith: ‘they should build up both the divine word and Christ within themselves’.

With Luther, the individual conscience had a somewhat anti-social aspect: it was set against law, social authority and the community of the time. But this new principle of the free conscience became the starting point from which a new social order unfurled. The free conscience became the basis for modern public dealings, public debate, for democratic systems and the scientific method, and for intimate relations. It became, in a way, the basis of modern society – with the idea that our beliefs and relations should be things in which we find ourselves at home, which we believe to be true, rather than being external impositions.

Yet now, we are losing the sense and value of this inner element: we are losing the idea that truth must be experienced internally, and freely, as mine. In public life, there is a routine violation of people’s beliefs, a routine forcing them to say things they do not believe – to apologise for something they don’t think was wrong, or to affirm a view that they don’t think is right. The question of truth, and rightness, have become in large part external, determined by externally imposed standards and systems of coercion.

There is a belief that every social or moral wrong can be rectified with coercive instruments or formal procedures: that rudeness can be solved by wardens handing out fines, or that minute instructions for living can be read off a policy or code. Like the early Orestes, we have been returned to fearing the furies, fearing the sanctions, rather than experiencing the rightness or wrongness of our actions as an internal matter.

Therefore, we need a new reformation, a new assertion of the principle of subjective right. This is to restate, in our own way, the old principles: that we should not say things we do not believe, that consciences should not be terrorised, and that truth, and good, should be experienced not as an external imposition but as something that we freely feel to be ours.

Josie Appleton is author of Officious – Rise of the Busybody State and writes at Notes on Freedom.