No surrender in the new free-speech wars

The ACLU’s own staff are attacking it for defending the alt-right’s rights. 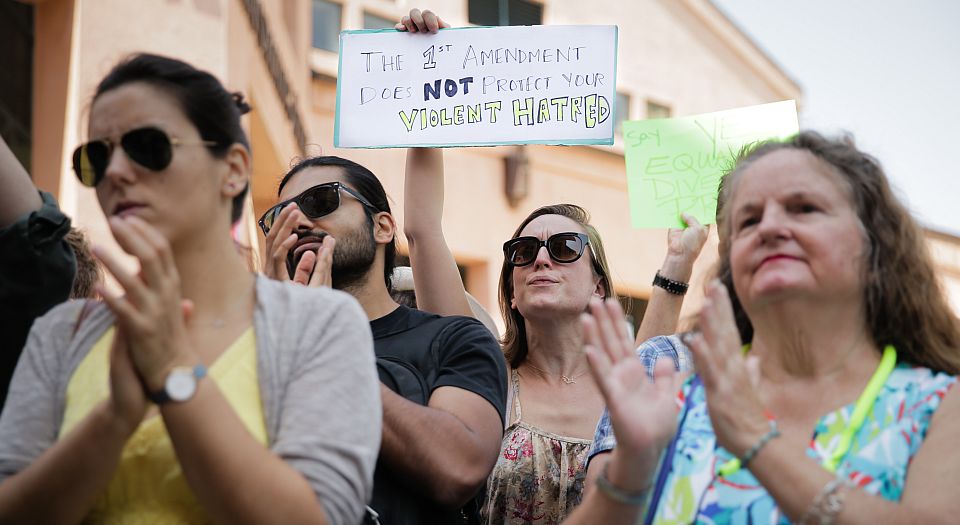 America’s commitment to freedom of speech, embodied in the First Amendment to the US Constitution, is under increasing pressure everywhere from liberal university campuses to the White House. Now even the American Civil Liberties Union (ACLU) appears torn over which side it should be on in the new free-speech wars.

The ACLU has long been a beacon of liberty in the Western world, whose commitment to free speech for all puts to shame pallid imitators such as the UK’s misnamed Liberty lobby group. If the ACLU joins the retreat from an absolute defence of free speech, then…

The trouble centres on the ACLU’s defence of free-speech rights for the ‘alt-right’ and neo-Nazis, most notably around the rally in Charlottesville, Virginia that ended with an anti-fascist protester being run down and killed.

This has sparked a serious backlash, notably among newer and younger members. ACLU membership has reportedly almost quadrupled since the election, with thousands seeing the organisation as a bulwark against President Trump’s attempts to trample on civil liberties. After Charlottesville, many of them have recoiled from the ACLU’s defence of ‘hate speech’, effectively declaring that ‘we didn’t mean THOSE sorts of civil liberties!’. Or as one resigning member of the ACLU board in Virginia tweeted to his former colleagues: ‘Don’t defend Nazis to allow them to kill people.’

Protests focus on the alleged tension between the ACLU’s commitment to free speech for all on one hand, and to racial equality and justice on the other. When the lobby took on a lawsuit against the Washington Metro, contesting a ban on ads for a book by alt-right posterboy Milo Yiannopoulos, ACLU lawyer Chase Strangio was adamant that defending free speech for ‘white supremacists’ did nothing for the rights of black activists: ‘The idea that the speech of Black Lives Matter is being defended through the representation of someone like Milo is a farce in my view.’

Now some 200 of the ACLU’s 1,300 employees have signed an open letter protesting about the organisation’s ‘rigid stance’ in defence of the First Amendment and free speech for all. They complain that ‘Our broader mission – which includes advancing the racial justice guarantees in the Constitution and elsewhere, not just the First Amendment – continues to be undermined by our rigid stance’.

The ACLU’s ‘rigid stance’ in defence of free speech even for those it despises goes back a long way, and has often been the subject of internal debate and struggle. One such famous row broke out in the late 1970s, when the ACLU defended the right of a small group of Nazis to march in Skokie, Illinois. The then director declared that the ACLU would always fight for the right to free speech, even if it means ‘defending my enemy’. That has remained the organisation’s position ever since.

However, veterans of past debates say they have never known so much ‘soul-searching’ about free speech within the ACLU as in the current rows over defending the alt-right’s rights. And while ACLU leaders insist their stance has not changed, others see worrying signs that it is becoming less ‘rigid’ in its defence of free speech.

For example, the ACLU has been notable by its absence from some of the high-profile disputes over free speech on campus. In response to the Charlottesville controversy, the ACLU issued new criteria for assessing which protests it will defend. These make clear that the ACLU will not recognise the free speech rights of ‘white supremacists’ who are assumed to be intent on violence.

As the ACLU national office put it, ‘The First Amendment absolutely does not protect white supremacists seeking to incite or engage in violence’. But as Wendy Kaminer pointed out on spiked, this presumption of what protesters intend to say or do ‘is a prescription for prior restraints on speech, perhaps the most dangerous form of censorship. Speakers are not supposed to be presumed guilty of inciting violence before they’ve even spoken.’ Least of all by the American Civil Liberties Union.

As arguments rage about whether the ACLU can defend free speech for the alt-right after Charlottesville, and the group reportedly ‘wrestles with its role’, perhaps we might offer our American allies a friendly reminder of a few things about free speech that we are all in danger of forgetting these days.

First, free speech is supposed to be free. That means it’s a right for all, not a privilege to be extended to those who conform to the rules of polite society. Once you turn free speech into a privilege, to be handed down from above like an act of charity, the question that always arises is: who gets to decide who ‘deserves’ that freedom?

The second thing we risk forgetting is that free speech is speech. It is simply words. Words can be powerful tools. But words are not deeds. Offensive speech should not be policed as if it were a criminal offence.

Contrary to that resigning ACLU board member’s tweet, defending freedom of speech for the alt-right does not mean ‘defending Nazis to allow them to kill people’. Violence is the responsibility of those who organise and perpetrate it, not those who only talk tough.

The third thing we tend to forget is that, when you put free and speech together, you get the most important expression in the English language. Free speech is the ‘killer app’ of civilisation, the voice of the morally autonomous individual, the most important liberty which makes society’s other advances possible. History-making movements have demonstrated time and again that, if not for the fight for free speech, other freedoms would not be possible.

Which is why it is so dangerous for ACLU activists to imagine there is some conflict between defending free speech for Yiannopoulos and Black Lives Matter, or a contradiction between a ‘rigid’ defence of free speech and fighting for racial justice. They would do well to look up the words of Frederick Douglass, former slave and anti-slavery fighter, who in 1860 demanded free speech for all because ‘Liberty is meaningless where the right to utter one’s thoughts and opinions has ceased to exist. That, of all rights, is the dread of tyrants… Slavery cannot tolerate free speech. Five years of its exercise would banish the auction block and break every chain in the South.’

The rag-bag of a few hundred far-rightists who gathered in Charlottesville bears no comparison to the powerful pro-slavery forces of Douglass’ day. They are pathetic even by comparison with the American Nazis of the 1930s (whose free speech rights the ACLU defended in the face of fierce criticism).

What seems new is not any growing threat posed by the alt-right in America, but the apparent retreat of the forces prepared to take a ‘rigid’, uncompromising stand in defence of free speech. As recently as 1999 David Baugh, a leading black ACLU lawyer, could defend a racist Ku Klux Klan leader on the basis that ‘In America, we have the right to hate. And we have the right to discuss it.’ As I observed in my free-speech book, Trigger Warning, ‘Baugh lost that cross-burning case on a point of law. Today he might be widely considered to have lost his mind. Yet he was right. In a civilised society, if we are talking about thoughts and words – however vitriolic – rather than violent deeds, all must be free to hate what or who they like, whether that means Muslims, Christians, bankers or Bono.’

The First Amendment to the US Constitution is still intact, of course, still resolutely declaring that ‘Congress shall make no law… abridging the freedom of speech, or of the press’. But as US judge Learned Hand warned his fellow Americans at a New York rally for liberty during the Second World War, ‘Liberty lies in the hearts of men and women; when it dies there, no constitution, no law, no court can save it’. If there are signs of liberty ailing in some hearts and minds even at the top of the ACLU, we free-speech fundamentalists have got a fight on our hands.

Mick is speaking at the session What is… democracy? at the Battle of Ideas festival in London on Sunday 29 October. Get tickets here.