Hillary is what happened

Her snobby, deluded book proves she has no one to blame but herself. 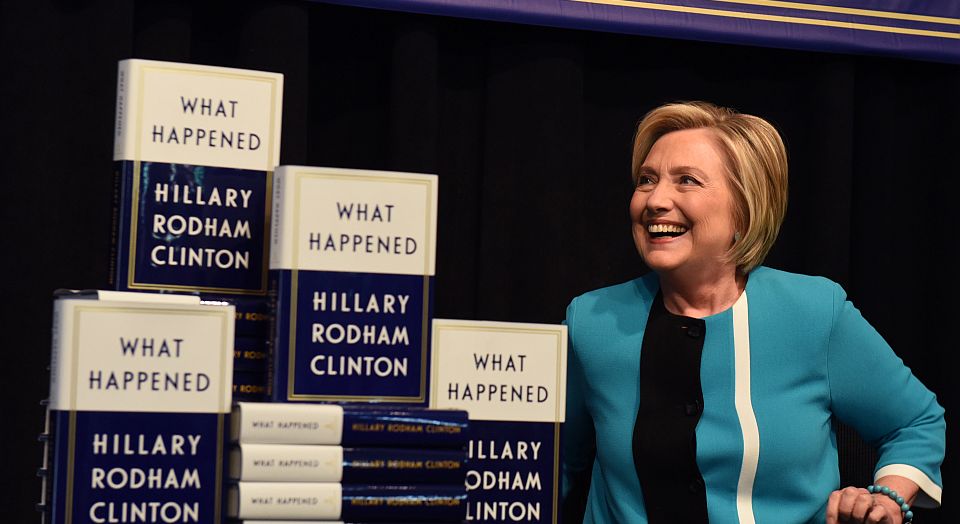 In the famous ‘Festivus’ episode of Seinfeld, Frank Costanza kicks off his alternative to Christmas with the Airing of Grievances: ‘I got a lot of problems with you people! And now you’re gonna hear about it!’ If you want to get an idea of what Hillary Clinton’s new book is like, think of Frank Costanza.

As What Happened reveals, Hillary has a lot of problems with a lot of people who, she believes, cost her the 2016 election. She doesn’t care if you don’t want to hear it (apparently many close to her advised against her writing the book), she is going to spend 512 pages letting you know how she really feels. When Clinton writes about ‘the deep currents of anger and resentment flowing through our culture’, you can’t help think that this is actually an apt description of her own feelings.

She identifies all of the people and factors that she blames for her loss. You will not be surprised to hear that Russian leader Vladimir Putin and FBI director James Comey are at the top of the list. She also writes, at length, about how she was undermined by sexism (while failing to explain why so many women – a majority of married and white women – voted for Donald Trump). And she pins special blame on the media, despite nearly all editorial boards and commentators supporting her.

Hillary’s list of those people (other than herself) to blame for her loss is much longer than we’d previously thought. Bernie Sanders is a particular target of her scorn. ‘Bernie’s presence in the race meant that I had less space and credibility to run the kind of feisty progressive campaign that had helped me win Ohio and Pennsylvania in 2008’, she writes. She seems to be saying: if I had no opposition, I would have won. It was exactly this sense of entitlement, that it was ‘her turn’, that she deserved a coronation not an election, that turned many off.

She refers to ‘Clinton fatigue’ being a factor she had to overcome, but she doesn’t fully appreciate how many voters didn’t like that the establishment Democrats had turned to the wife of a previous president (just as the establishment Republicans had turned to Jeb Bush, the son and brother of previous presidents). The idea of family legacies appears monarchical, and just doesn’t fit with a democratic republic. Hillary’s building-up of her daughter Chelsea in the book – clearly being positioned for future office – doesn’t help her appear less aristocratic, either.

What Happened also makes clear that, of all of those apparently to blame, the people she is most upset with are the backward masses who voted for Trump – those who ‘saw the world in zero-sum terms, believing that gains made by fellow Americans they viewed as “other” – people of color, immigrants, women, LGBT people, Muslims – were not earned and must be coming at someone’s expense’. In other words, the ‘deplorables’ who she infamously declared ‘irredeemable’ during the campaign. She gives a quick, half-hearted apology for the ‘deplorables’ comment, before going on to spend pages of text defending her use of it and effectively doubling down on it: ‘Too many of Trump’s core supporters do hold views that I find – there’s no other word for it – deplorable.’

She simply cannot hide the fact that she looks down on the electorate. A prime example is this passage:

‘Since November, more than two dozen women – of all ages, but mostly in their twenties – had approached me in restaurants, theatres, and stores to apologise for not voting or not doing more to help my campaign. I responded with forced smiles and tight nods. On one occasion, an older woman dragged her adult daughter by the arm to come talk to me and ordered her to apologise for not voting – which she did, head bowed in contrition. I wanted to stare right in her eyes and say, “You didn’t vote? How could you not vote?! You abdicated your responsibility as a citizen at the worst possible time! And now you want me to make you feel better?” Of course, I didn’t say any of that. These people were looking for absolution that I just couldn’t give. We all have to live with the consequences of our decisions.’

It doesn’t occur to Hillary that it should be the other way around: that she should be apologising to this young woman, that her head should be ‘bowed in contrition’ for running a dull and uninspiring campaign. Instead, she adopts a self-pitying, ‘you let me down’ posture. As Brecht ironically suggested, maybe we should dissolve the people and elect another.

Hillary’s campaign lacked a compelling message and vision. As Jonathan Allen and Amie Parnes write in Shattered, their analysis of her campaign, ‘Hillary had been running for president for almost a decade and still didn’t really have a rationale’. In her book, Clinton says ‘I never stopped getting asked, “Why do you want to be president? Why? But, really – why?”’ She thinks it must be down to sexism: ‘Maybe it’s because I’m a woman, and we’re not used to women running for president.’ Or maybe you kept getting the question ‘why are you running?’ because you never gave a good answer.

A striking feature of the election contest was how the billionaire Trump was able to appear less of an elitist, and less of an establishment figure, than Clinton. In What Happened, she displays a lack of self-awareness of how she might come across as living in a bubble, a life that the masses cannot relate to. She waves away her $20million-plus earned from speeches to Goldman Sachs as ‘bad optics’. She tells of how she decided to run after flying down to the Dominican Republic with Bill to meet with their friends Oscar and Annette de la Renta in their luxurious retreat: ‘We swam, ate good food, played cards, and thought about the future. By the time we got back, I was ready to run.’ She namedrops musicians and celebrities that she hangs out with. She has a huge entourage of personal help: three schedulers, three hairdressers, two make-up artists, a nutritionist. ‘Every time our plane lands, Isabelle rushes forward with hairspray, and Barbara spritzes my face with a vaporiser full of mineral water.’

Hillary’s aversion to the ‘deplorables’ was such that her campaign did not bother to appear in huge sections of the Rust Belt to try to win their votes. ‘Yes, we campaigned in Michigan!’, she says in the book, forgetting to mention Wisconsin and other states she avoided. Maybe she will visit Wisconsin on her book tour.

You have to wonder, why on Earth did Hillary write this book? It is a backward-looking rehash, covering ground that both supporters and detractors probably don’t want to dwell on. She offers no new ideas (just a restatement of her campaign lines) for the Democrats or the country. Instead, the book is very therapeutic, with long sections on how upset she was with the result (‘there are times when all I want to do is scream into a pillow’) and her steps towards recovery (alternate-nostril yoga, chardonnay and nature walks).

A recent NBC/Wall Street Journal poll found that only 30 per cent of Americans view Hillary positively, versus 53 per cent who see her negatively. That makes her – believe it or not – even less popular than Trump. Her book is unlikely to swing people in her favour.

No doubt, Hillary’s core fans will think about ‘what could have been’, dreaming of the first woman president sitting in the Oval Office, rather than Trump. Yet, for those less committed, the book provides indications of what the reality of Clinton in office might have been. In one passage, she cites George Orwell’s Nineteen Eighty-Four to claim that authoritarianism is ‘to sow mistrust toward exactly the people we need to rely on: our leaders, the press, experts who seek to guide public policy based on evidence’. The lesson of Nineteen Eighty-Four is to trust leaders? I don’t think so. Here, Orwell himself is treated in an Orwelllian fashion.

As it happens, it is not too far-fetched to imagine that Clinton would have brought her own brand of authoritarianism into the White House, pursuing illiberal measures that Obama and other Democrats favour, whether it is imposing limits on speech, restricting gun rights, or eliminating due process in government-mandated kangaroo courts on campus. Trump is a disaster of a president, but What Happened is a stark reminder that Hillary would have been no better.