Sell Democracy to the EU? No deal

The Brexit talks are a fixed exercise in political punishment. 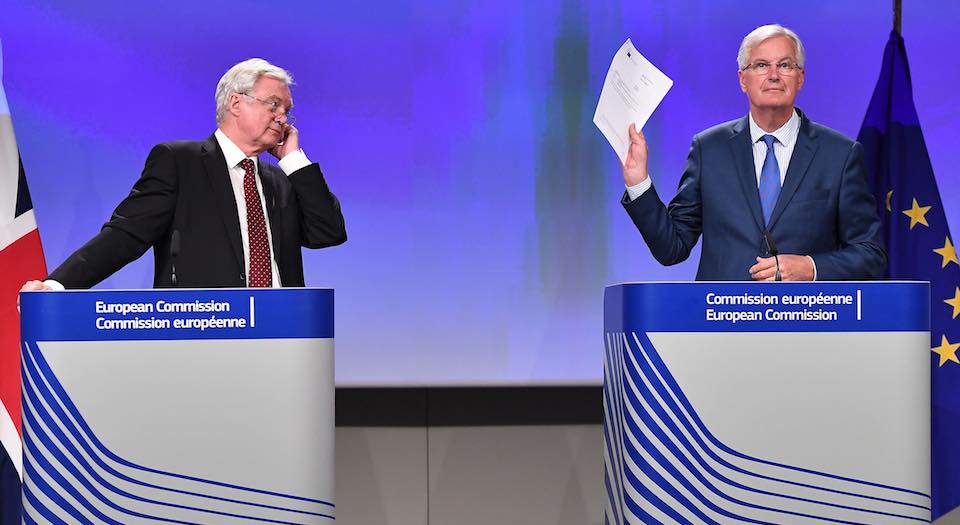 To some of us, EU officials’ attitude towards Brexit negotiations sounds increasingly like the imperious statements of British and French statesmen at the end of the First World War. In 1918, Sir Eric Campbell-Geddes, Tory minister in charge of the Royal Navy, pledged that the post-war settlement would ‘squeeze the German lemon until the pips squeak’. The Versailles Treaty put that squeeze into practice, imposing heavy reparations and sanctions on Germany.

A century later, it seems that the EU commanders want to squeeze the UK lemon until the pips squeak, imposing a huge ‘divorce bill’ and demanding effective political submission.

The difference is, however, that back then Germany had just suffered a devastating defeat in a world war, and had no real alternative but to accept the Allies’ punitive terms at Versailles. By contrast, Britain has not suffered any defeat. It has voted for more democracy and sovereignty through independence from the EU.

And if pursuing the democratic path to Brexit means walking away from the fixed EU talks – either physically or in spirit – then the UK must be as willing as it is able to do just that. If no deal really is the best deal, let’s take it. Leave Barnier and Juncker to squeeze their own lemons if they like.

All the signs are that the EU sees the Brexit talks as a punitive political exercise rather than real negotiations. Barnier’s brief is to refuse even to discuss future relations with the UK until the British government agrees to Brexit on the EU’s terms.

Former Greek finance minister Yanis Varoufakis, who has bitter experience of being on the wrong end of EU ‘negotiations’, tried to spell out a few home truths to the UK government last week. ‘The EU does not want to negotiate with Britain’, he said. ‘The greatest nightmare for Brussels, but also Angela Merkel and Emmanuel Macron, is a mutually advantageous agreement with Britain. This will be interpreted in their mind by the rest of the riff-raff of Europe — the Greeks, the Spaniards, the Portuguese — as a sign you can confront the EU’s deep establishment and get a decent deal out of it.’

Some might wonder why, in that case, the left-wing ‘firebrand’ Varoufakis toured Britain before the referendum telling us to back ‘the EU’s deep establishment’ by voting Remain. But his point about the EU elite’s war aims is well made. They want to teach not only the British people but also ‘the rest of the riff-raff of Europe’ that demanding democracy and sovereignty does not pay, and that trying to buck Brussels will only win you a serious kicking. They understand that the future of the centralised EU bloc is at stake in the battle over Brexit.

It’s not simply a case of EU empire-builders such as Merkel or Juncker trying to bully the UK from without. The Remainer elite within, still outraged by its democratic defeat in the UK referendum, is entirely on their side, denouncing the British government’s supposed ‘pipe dreams’ and ‘intransigence’ in the talks while cheering on the inexorably intransigent Eurocrats.

As the BBC’s Andrew Neil put it, in a tweet that had top Remainers frothing at the mouth, ‘Default position of UK establishment: When Brussels talks tough it’s wise and formidable. When London talks tough it’s weak and pathetic.’ That UK establishment attitude was symbolised last week by the revolting spectacle of former New Labour prime minister Tony Blair going to Brussels to give EC boss Juncker a big hug for his efforts to junk Brexit, which even prompted a more mainstream BBC man, Andrew Marr, to demand of Blair: ‘Whose side are you on?’ A good question to put to all UK politicians now, though we might well suspect we know the answer.

The writing is on the brick wall that the Brexit talks have run into. It is surely high time that the British government either walked away from the fixed table, or at least turned its back on the EU in spirit and focused its energies on the future of an independent UK. Yet what is the response of Theresa May’s divided Tory government? To try to come up with more concessions that can satisfy the insatiable EU democracy-eaters.

Thus the latest round of Brexit talks has just been postponed – not because the UK government has had enough of this diplomatic farce, but because EU officials are waiting to hear Mrs May’s big speech on Europe next week. It is rumoured this will include a ‘major new offer’ on the UK’s ‘divorce’ bill and other concessions to the EU’s demands.

Let us remind everybody again what the referendum of June 2016 was about. Despite the repeated claims by Remainers that the ignorant people ‘did not know what they were voting for’, the choice was clear and comprehensible to all. The simple referendum question, remember, was: ‘Should the United Kingdom remain a member of the European Union or leave the European Union?’ Should we Remain or should we Leave. Not ‘Should the UK remain a member of the EU, or leave in principle but swallow whatever penalties and restrictions the EU imposes in practice?’

And 17.4million people — the largest mandate for anything in British political history — voted Leave, for greater democracy and sovereignty. We did not vote for some neocolonial sham version of independence, where the limits of liberation are set by the old imperialists (a system of ongoing indirect control that the British elites should know when they see it, since it was largely invented here).

Time to insist – and mean it — that no deal really must be better than a bad deal. And that the category ‘bad deal’ encompasses anything with which the pro-EU elites in Europe and the UK are currently seeking to swindle us. Sell the democratic demand for Brexit as the price of access to the Single Market? We’re out.

Whether or not the fixed Brexit negotiations continue to chunter on in the background, the focus now should be on deciding the independent interests of democracy in the UK. Various options for future economic arrangements have been put forward; Varoufakis, for example, suggests the UK quit the EU talks now and instead apply for interim membership of the European Free Trade Association, through which Norway, Switzerland, Iceland and Liechtenstein access the Single Market. But whatever technical economic measures are proposed, what matters is that the policy is infused with the democratic political spirit of Brexit, and not hobbled to suit EU diktat.

In the face of all the high-level doom and gloom about the future, it is uplifting that opinion polls show most British voters not only still favour Brexit, but want the government to get on with it. As so often, the democratic wisdom of the masses is a positive counter to the self-preserving fatalism of the elites. The tragedy is that there is no party to represent them in UK politics today; the way that veteran Labour left MP and Leaver Dennis Skinner has been denounced as a ‘Tory’ and a ‘scab’ by Jeremy Corbyn’s supporters, for daring to back the government’s EU Withdrawal Bill, confirms how little the old politics of left and right mean today, and how much we need a political realignment around fighting for greater democratic control through Brexit. Where’s the ‘No Deal at the expense of democracy’ party?

Contrary to the abuse hurled about by Remainers, demanding an independent Brexit has nothing to do with ‘insular nationalism’. Striking a blow against the EU elites is the best contribution we can make to the future of European democracy. Our destiny lies in a free embrace not with the repulsive Blair and Juncker, but with the revolting ‘rest of the riff-raff of Europe’.