‘You should never feel guilty about what you eat’

Anthony Warner on the ‘bullshit’ of health-food fanaticism. 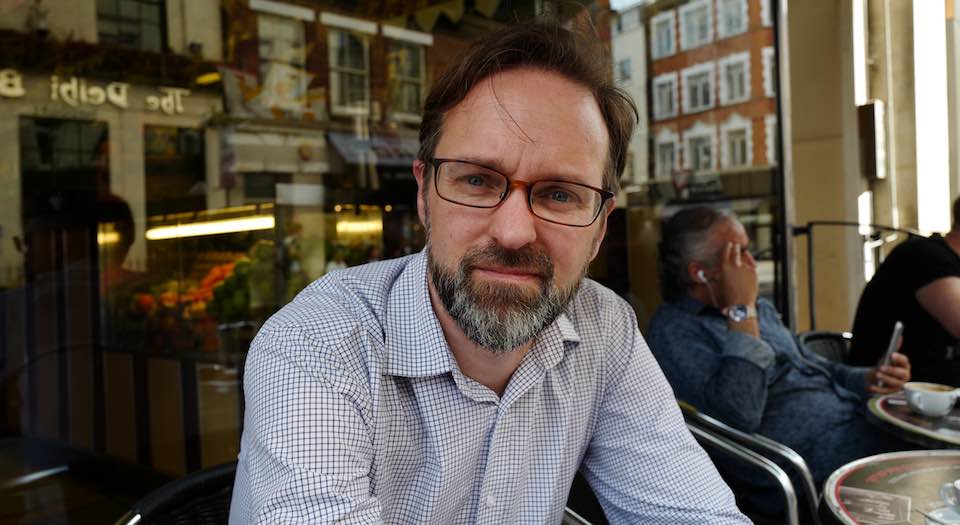 These days you can’t go a week without hearing about another ‘superfood’ or the health benefits of a new food trend. Even Starbucks has jumped on the bandwagon, announcing its latest caffeinated offering: the turmeric latte. No doubt this was inspired by food bloggers decreeing that turmeric is a ‘superfood’.

Chef Anthony Warner is unlikely to be impressed with turmeric’s good press. Writing as his blogging alter-ego The Angry Chef, Warner declares: ‘There is no such thing as a superfood.’

Warner has dedicated himself to debunking the health myths behind the food fads that have been multiplying ever since the phenomenon of food-blogging took off. In his witty and slightly ranty blog, he has pulled apart many of the popular dietary trends of the past few years, from sugar-free diets to ‘paleo’ and the alleged miracle benefits of coconut oil. The blog quickly gathered momentum and this year Warner brought out his first book: The Angry Chef: Bad Science and the Truth About Healthy Eating.

In an attempt to understand what I really should be eating, I spoke to Warner about his work. He tells me what made him angry in the first place: ‘It goes back to a time when I saw one of these new breed of clean-eating gurus speaking at a food stall at a food industry fair. I’d heard about this idea of people going online and talking about healthy eating. I thought it was interesting, so I went along. Some of what she was saying seemed sensible, like eat vegetables, but some things seemed quite strange, and unscientific, and some of it was definitely untrue. So I started looking into it – and this is before it was a massive thing.’ He continues:

‘As it grew in popularity I got quite worried about it. I thought, how can they get away with saying stuff like this so publicly and not being challenged? And nobody seemed to be challenging it, particularly. I started complaining about it more and more and so started writing about it… [The blog] got popular quite quickly because people could see this stuff happening but no one was talking about it and I think it caught a bit of a wave.’

Warner, who works as a chef for a large food manufacturer, points out that when the food industry makes health claims about food, it has to adhere to strict European regulations. For food bloggers, however, there are ‘no checks and balances’. ‘I just felt like it was about time someone starting saying something and holding these people to account for what they’re saying.’

Health-food blogs like Deliciously Ella and Hemsley and Hemsley have become household names and have made plenty of money from telling people which foods to cut out and which to eat more of – all in the name of healthy living. Has Warner had any response from the food-blogging world? ‘None of the high-profile ones will engage with me. I would be delighted to do an event and be onstage with them and talk about the food claims. No one will really debate with me.’

I’m not surprised. When Warner tackles dietary claims, he is thorough, researching and referencing scientific studies in order to challenge the pseudoscience, making him a daunting prospect in a debate. In his book, he examines and then tears apart spurious claims, or as he often calls them, bluntly, ‘bullshit’, made by food and lifestyle sites. Goop, Gwyneth Paltrow’s lifestyle site, comes under fire in the chapter on detox diets for its claim that ‘wild blueberries (only from Maine) draw heavy metals out of your brain tissue’.

Warner has spent his working life as a chef, working in restaurants before moving into the food industry, but he has a scientific background. He has a degree in bio-chemistry and his scientific curiosity has remained with him. Today, he doesn’t hold back when attacking pseudoscientific health claims. In his book, he says: ‘Rule No1 in the Angry Chef Guide to Spotting Bullshit in the World of Food is: never trust anyone who claims to have a food philosophy.’ Yet despite his directness and alter-ego, he doesn’t actually seem that angry. Rather, he is concerned about the damage dietary myths can wreak on people’s relationship with food.

The recent phenomenon of ‘clean eating’ is one Warner finds particularly troubling. He explains what it is: ‘What happened is, 30 or 40 years ago, a lot of people were on a diet. That’s because everyone wanted to be thin – which was troubling in itself. As you go into the millennial generation, and even a bit before, people thought dieting is a bit old hat. Everything needs to be effortless these days. So in order to justify this idea of effortless thinness, a lot of people started excluding food groups from their diets and putting together pseudoscientific justifications for doing that, so it didn’t seem like a diet.’

He mentions some popular clean-eating beliefs, like carbs are bad for you and sugar is poison. ‘None of them have any basis in fact’, he says. ‘[They say] I’m eating clean because I want to be well, I want to have the glow – and they never mention thinness. But that is what it’s all about. When you exclude stuff from your diet, you lose weight, there’s no doubt about it. But in order to do that, you’re saying some foods are bad and damaging and hurtful, and that can create fear around foods. Perfectly healthy things to eat, like rice or pasta – you’re making people afraid of those foods in order to justify excluding them. As soon as you say you’re eating clean, then you’re saying that foods you’re not eating are dirty, and that language is particularly damaging. Because we believe we are what we eat.’

Thanks to social media, the reach of the clean-eating brigade is enormous. This can make it even more harmful. ‘If you speak to anyone who works with eating disorders, they will tell you [that] pretty much everyone who comes in with an eating disorder is following some kind of clean-eating diet. I feel it has risen so fast, and there are not enough checks and balances.’

I ask him about Public Health England’s latest food panic over sugar, giving rise to the fizzy-drink tax and fears over ads aimed at children. Warner says people do, in general, eat too much sugar, and ‘some sensible steps’ have been taken to tackle this. But he believes ‘influencing’ is key, rather than ‘taxing or ordering’. Once again it is the messaging around food that he takes issue with. ‘A lot of messaging around sugar… uses this language of shame and guilt. I think there is no place for this at all… There’s no place for making people feel guilty for what they’re doing or how they feed their children. It’s not helpful… If you’re moralising too much, you’re in danger of pushing people away.’

He points out that where public-health campaigns have had success is among affluent groups: ‘We’re in danger of leaving a lot of people behind. We need to be careful about it and not be too judgemental, or shaming, or tell people off.’

The vegan diet is one that has been making headlines recently. Just this week, Jeremy Corbyn said he has been toying with the idea of going vegan (he’s already vegetarian) and the recently released Netflix documentary What The Health caused quite a stir with some of its claims about the health benefits of a vegan diet. Is veganism just another food fad?

‘I have no problem if someone takes a moral decision to go, look I’m troubled by exploiting animals in order to eat’, he says. ‘It’s not what I want to do, but if that’s someone’s moral standpoint on it, then it’s fine… But I don’t like the moralising and the shaming of other people, that really offends me. Any sort of moralising about other people’s food and telling people their food is bad and making them feel guilty is just not right.’

Not surprisingly, Warner takes issue with much of the ‘trash science’ tied up with the vegan movement. What The Health is a ‘propaganda movie’, he says. It presents a ‘stupid mangling of evidence and misunderstanding of data’: ‘The way they adopt bad science into the vegan movement is just embarrassing. I know vegans who are embarrassed about that movie.’

‘There’s a lot of powerful motivating psychology for people to have deep-held beliefs about veganism and it makes them believe some really stupid stuff’, he continues. ‘That intense motivation to be vegan and that intense disgust about eating animal products translates into them believing ridiculous conspiracy theories.’

Okay, so we know what The Angry Chef doesn’t like. But what health and diet tips would he himself offer? ‘My advice is don’t ask a chef’, he laughs. ‘My general response to questions on how to eat healthily is just to eat loads and loads of different stuff. Don’t exclude anything from your diet, unless you medically have to. Enjoy lots of different foods. Don’t feel guilty about any food. Guilt has no place when it comes to eating. And don’t make anyone else feel guilty about what they are eating.’

I can’t resist asking his opinion on my own particular food-fad bugbear: the trend for substituting normal ingredients – often carbohydrates – with vegetables. For example, pizzas made with cauliflower instead of bread bases. He’s blunt: ‘I struggle with the idea that a cauliflower base with some cheese and tomato on top is called a pizza. It ain’t a pizza.’ He’s sceptical of attempts to avoid carbs. ‘Wheat is high in B-vitamins, in fibre, it’s a really good food source. If you want to make pasta out of courgettes, if you want to make a pizza base out of cauliflower, then good luck to you’, he says. ‘But if that’s because you’re excluding something, unless you’re someone with diagnosed conditions, then why are you doing that? Maybe cauliflower pizza-base is an acquired taste, but I wouldn’t want to have to go about acquiring it.’

So are there good foods and bad foods? ‘All foods are fine, in my opinion… unless something is poisonous.’ That’s good enough for me.

The Angry Chef: Bad Science and the Truth about Healthy Eating is published by One World.