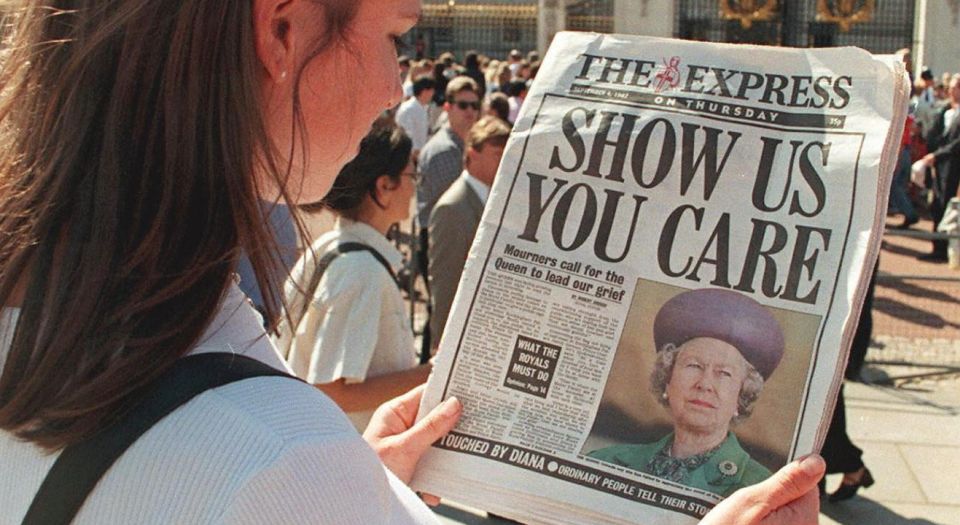 After Diana: the age of emotionalism

It is 20 years since emotional incontinence went mainstream.

It is almost exactly 20 years ago to the day that Britain’s national character changed utterly. Or more precisely, it’s 20 years since it became abundantly clear that there had taken place a shift in the way we in the UK, and the Western world in general, conducted ourselves in the public sphere. The now infamous ‘outpouring of grief’ over the death of Princess Diana that followed her death on 31 August 1997 came as a shock to many. Yet it was no aberration, no insignificant isolated incident, even if Diana herself has been relatively forgotten.

If Paul Gascoigne’s celebrated tears in Italia ’90 were, in hindsight, an early indication of the transformation of a nation’s psychology, Diana’s death seven years later put into sharp relief what had indeed changed. It represented something quite profound: it signified the coming of a new era of emotionalism, and the twilight of the age of reason and rationalism. We see it and its consequences all around today, from therapy culture, virtue signalling and the promotion of ‘self-esteem’, to hate-crime legislation, offence-taking, censorship, Safe Space and trigger warnings. September 1997 signalled the dawn of the age of feelings and emotion.

Prince William and Prince Harry have recently talked of their bewilderment and discomfort at the behaviour of the multitude of mourners that September, bawling over the death of a stranger, their own mother. In this respect, they were not alone that month. The mass public grieving, the oceans of floral tributes, the rush to buy multiple copies of Elton John’s ‘Candle in the Wind’, the demand from the teary masses that the queen show some emotion, even the tremor in Tony Blair’s voice: all of this first shocked, bemused and then irritated many parts of Britain. It wasn’t just republicans or those on the left who were nauseated, as they are wont to be by anything crassly populist or connected to the royal family. The people most taken aback were conservatives, and this includes left-leaning, social and moral conservatives, who were horrified at such public bawling and this unashamed, unfettered unleashing of emotion.

It wasn’t merely that people’s emotions were on open display. Some questioned the authenticity of this public weeping, wondering whether it wasn’t merely the intoxicating dynamics of the mob at work: when people are gathered in their thousands, whether at football matches, political rallies or mass religious ceremonies, emotion always takes over – and is liable to veer into mania, hysteria, ecstasy or anger. Others wondered if those who were sobbing weren’t really mourning for Diana, but were using the occasion as a form of catharsis, to unburden themselves of their own personal sadness.

In any case, it seemed that the traditional British reserved character and stiff upper lip had vanished, to be replaced by ‘mass hysteria’, ‘floral fascism’, or, for my own small part, what I later called ‘conspicuous compassion’ – a new age in which appearing to care had become the prime social virtue, and a means for forming social bonds. As I wrote in the book of that name, ours had become a superficial, emotionalised era, in which appearing to be good now took precedence over actually doing good (1). I wrote that the reaction to Diana’s death could be placed in context with the emergence of empathy ribbons, historical apologies for past wrongs or the anti-war slogan ‘Not In My Name’: public and political behaviour had become about displaying what a virtuous person one was.

Although my small book of 2004 (hilariously described by the national press as ‘a report’) made the national news in February that year, no one today talks of ‘conspicuous compassion’. Instead we hear of its close, associated relation, ‘virtue signalling’, the propensity to display a political viewpoint that is fashionable and ostensibly caring in order to make you look worthy – even if you don’t necessarily adhere to it or are prepared to do something about it. The existence of ‘virtue signalling’, like ‘conspicuous compassion’ before it, demonstrates the establishment and resilience of our era of emotionalism and superficiality. Virtue signalling is the symptom of a culture now firmly governed by emotion, feeling, empathy and gestures, of a culture that to a large degree eschews reason, objectivity and action.

Its symptoms have been legion this year alone. Take the recent debate over ‘hate crimes’ and the possibility that such perceived misdemeanours might be monitored online. The notion of ‘hate crime’ is itself a manifestation of the age of emotion, grounded not on what physical action has been carried out by a subject upon an object, by a criminal upon a victim – like robbery, rape, fraud or burglary – but upon the mental and emotional motive of the perpetrator. Additionally, in ‘hate crimes’, the victim becomes the ultimate judge, not through empirical testimony, but based upon his or her unverifiable and irrefutable ‘perception’ of ‘hate’.

The idea of extending ‘hate crime’ vigilance to social media has horrified many, given that the concept of ‘hate’ is so nebulous in this arena that it would be impossible to draw any line. But Twitter and Facebook have already been enablers of this age of emotion. One consequence of our emotionalised age and the the diminution of repression and self-control is that people are much quicker to anger – call it the ‘Jeremy Kyle era’ or ‘Age of What You Lookin’ At?’. And Twitter has been an invaluable conduit in which to vent one’s rage in response to perceived slights or against people with opposing political points of view. Twitterstorms, the carry-on of the alt-right/alt-left, online abuse and unconvincing, but still unsettling, rape threats represent the worst aspects of this emotionalised age.

Another symptom is that of ‘mourning sickness’, a phrased coined in the pages of LM, spiked’s print-magazine predecessor. This is the now well-established propensity, as witnessed after Diana’s death, for mawkish overindulgence in the wake of a public figure’s passing, of enjoying the occasion rather too much, and for using the event as a means to occasion a sense of public solidarity. Facebook has been a facilitator here, hence last year the deaths of Lemmy, David Bowie, Prince and others were spoken of online as a kind of morbid, apocalyptic conjuncture. ‘Why is everyone dying?’, people cried. ‘Things will never be the same’, others wailed, as they always do when someone famous dies, because ‘he/she was part of my childhood’.

Elsewhere, an increasingly hot topic over the past couple of years has been censorship at universities, with their Safe Spaces, No Platforming of ‘offensive’ speakers and trigger warnings prefacing potentially ‘hurtful’ books and lectures. All this language, all of this entire mentality of avoiding offence and nursing wounded feelings, is a direct consequence of our emotionalised age. It doesn’t matter if an argument is wrong or can be refuted, or even if it’s true: of prime importance now is whether something hurts your sense of self. If it does, it should be banished. The same mentality feeds into the new culture of iconoclasm. If a statue causes anyone mental grief or distress, then pull it down.

Wherever one looks, the language of emotionalism proliferates. We hear of ’emotional intelligence’, of people promoting ’emotional wellbeing’ (a phrase that has supplanted ‘self-esteem’). Not a sporting event goes by without the breathless winner being asked how he or she feels. Not a TV talent gameshow passes without a teary contestant dedicating his or her performance to his or her dead, inspirational granny or speaking about how he or she has been on an ’emotional rollercoaster’. Cricketers celebrate a century now not with a handshake, but with a hug. People talk openly about their problems, not just with friends and family, but via Facebook to the public. Some now even literally converse in the language of emotion: emojis.

‘Mourning sickness’ is with us still. Black armbands and minute’s silences at football matches are far more common than they used to be 30 years ago. Not a Prime Minister’s Questions begins without an obligatory mention of condolence in regards to whatever the latest tragedy is. We instantly and instinctively react now to terrorist atrocities with candles, changing our Facebook profiles in empathy or pronouncing on social media, ‘Je suis [insert European city here]’.

What’s wrong with this, you may ask? Isn’t releasing our emotions better than bottling them up? Do we really want to go back to an age of life-negating, unhealthy, stifling repression, to the time of our fuddy-duddy emotionally constipated grandparents? Well, I suppose not. But there is a balance to be struck. At its most benign, our over-emotionalised age represents the infantilisation of society, something to which the death of Diana and its lachrymose aftermath bore testament. As Nietzsche noted: ‘Observe how children weep and cry, so that they will be pitied, how they wait for the moment when their condition will be noticed.’ A better reaction to terrorism, for instance, would be action rather than candles.

At its worst, this age, in which we surrender to emotions, has spawned a new spirit of intolerance and anger. As Sigmund Freud wrote in his great book Civilisation and its Discontents (1930), repression is vital for the functioning of societies in which strangers have to live side by side. Without repression of our emotions and instincts, he wrote, we would happily murder a neighbour who has slighted us. And while we haven’t reached that stage yet, the diminution of reason and repression in favour of emotion and feelings has given us road rage, increasing sexual aggression (see increased incidents of sexual molestation on trains), and a political arena which has become vastly more vitriolic, nasty and intolerant. The unleashing of visceral passions has given us ISIS and Antifa, those ‘believers’ – not thinkers – who prefer violence rather than reason and tolerance.

And that’s the key word: tolerance. It might be a bland, unfashionable one, but tolerance is the virtue that is the foundation of civic society. Among a society of strangers, we may not like what others say – and we certainly don’t have to display ‘solidarity’ or ’empathy’ with people we don’t know or like – but we must allow them to say it, and they must reciprocate likewise. We must not be governed by emotion and instinct, which dictate that if you are not with me you are against me.

An emotionalised age that made itself known with the death of Diana at first looked somewhat peculiar, and by the end of 1997, it seemed it had passed. But it hadn’t. The conspiracy theories that soon emerged after her accidental death in a Parisian tunnel were the true harbingers of what was to come: of a new backward age of unreason. In the 20 years since her death, this new age of emotionalism has now begun to evolve into something more alarming, one in which we do not so much as ‘let out our feelings’ as let our passions become inflamed. Yet civilisation is underpinned not by giving into your feelings, but by mastering them. The repression of feelings is what makes us special. We are not animals, after all.