Ten wasted years: the crash one decade on

Since 2007, nothing has been done to address economic decay. 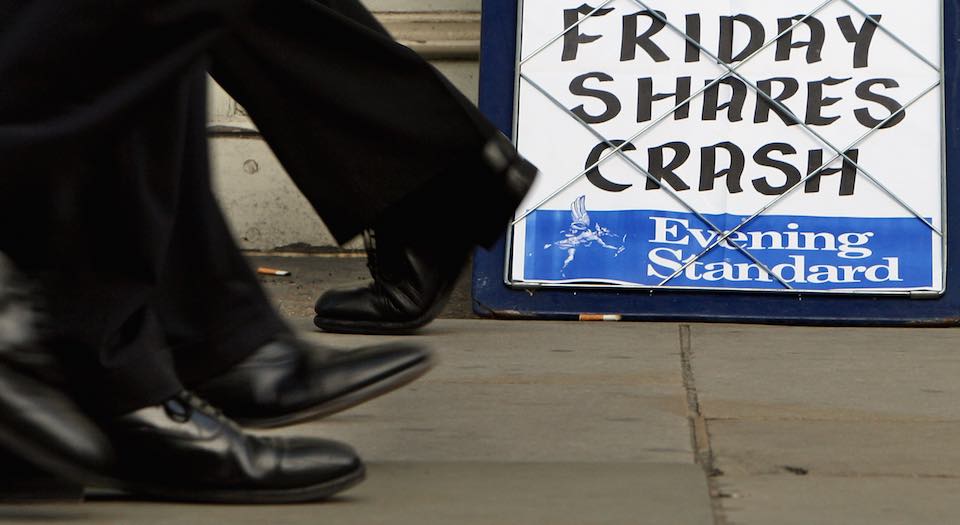 This summer has seen the start of the discussion about the 10th anniversary of the financial crisis. It’s a discussion that will continue through to autumn next year. To recap, it was on 9 August 2007 that the French bank BNP Paribas announced that the ‘complete evaporation of liquidity in certain market segments of the US securitisation market’ had ‘made it impossible to value certain assets fairly’. This blunt admission by BNP Paribas that it could no longer price, and therefore redeem, investments in three of its funds triggered a breakdown in trust between financial institutions.

As a result, the wide diversification of repackaged debt around the financial system, which had previously been heralded as sound ‘risk management’, backfired. No one seemed to know which bundles of paper were worthless, so none could be relied upon. Credit markets began to freeze up.

A few weeks later, on 12 September 2007, the crisis crossed the channel when Northern Rock asked the Bank of England for emergency liquidity as it was unable to raise funds in its normal way in the money market. Two days later, a Friday, queues formed outside branches of Northern Rock as customers withdrew an estimated £1 billion. Britain was experiencing its first run on a bank in over 150 years.

After a tense weekend, then chancellor of the exchequer Alistair Darling announced that the Labour government would guarantee all deposits held at the bank. This paved the way to Northern Rock’s formal nationalisation the following February. Several more months of financial turmoil ensued, culminating in the iconic image of the crash. In September 2008, workers were photographed departing the offices of the bust Lehman Brothers bank with their personal possessions in cardboard boxes. The crisis reached its nadir and the Western economies experienced the deepest part of the accompanying recessions.

Financial and economic conditions subsequently stabilised. But what distinguished these recessions from every other recession since the Second World War was the non-arrival of a meaningful recovery. Dramatic as the events of summer 2007 were, their real significance was not that they were the start of a financial crisis, but rather that they looked like the end of the protracted second act of the Long Depression. The financial crash expressed the limits of having a financialised debt economy as a means of indefinitely muddling through economic crisis.

The roots of the depression were much earlier, in the slowdown in investment and productivity growth at the turn of the 1970s, precipitated by the resumption of capitalism’s recurrent crisis of profitability. After the initial shock to confidence and the disruption from a couple of synchronised recessions in the mid-1970s and early 1980s, by the end of the 1980s Western capitalism had entered a more tranquil, though mostly slow-moving second phase.

More accommodative political conditions both at home and abroad facilitated a period of relative economic stability that lasted for two decades. Domestically, a more combative approach taken by the Reagan and Thatcher governments in the early 1980s crushed the organised trade-union movement. This completed the drawn-out defeat of working-class politics that became evident in the collapse of industrial activism across Western nations. These more quiescent circumstances at home offered greater scope for adopting policy measures that might compensate for the effects of the economic slowdown. Governments across the advanced nations began to prioritise stability over a resumption of growth. This was the period when financialisation took off, aided by more interventionist central banks. Western economies coped through the expansion of debt rather than the production of new wealth.

With the end of the Cold War from 1989 onwards, international conditions became far more favourable for Western capitalism’s coping strategies. Market relations expanded globally, reinforcing the belief that, whatever its difficulties, there was no realistic alternative to the market system. Practically, cheaper goods from China and elsewhere made it easier for people and businesses to endure constrained incomes. Complementing this, the unexpected emergence of capital flows into the West from China and other less developed parts of the world eased financial conditions further.

The swelling debt economy in the West underpinned a phase that was dubbed ‘the Great Moderation’. There was little in the way of dynamic accumulation of wealth, but continued credit issuance sustained economic activity and living standards. Until, that is, the events starting 10 years ago brought this stage to an end, and shattered the sense of complacency.

The crash revealed the limits to living off debt. Not absolute limits, but relative ones. Debt levels can expand indefinitely, but at the cost of occasional implosions. The disconnect between the credit-inflated prices of financial assets and the reality of much more restricted levels of value-creation is like a piece of elastic that every so often snaps back. After the spasm, though, the gap can open up again.

The following five charts about the British economy – and similar ones could be drawn for other Western economies – tell how little has been gained from the pain of the crash and recession. The overdue need to restructure production was shelved once again. Instead, we are on the way to the next crashes, but from a weaker base, and with more of the system’s sources of resilience exhausted. These charts illustrate that:

— Productivity flatlining has become more evident;
— Business investment remains down;
— Research spending has been falling for an even longer time;
— Wages have deteriorated;
— Debt continues to surpass previous records.

By telling the economic story of the past 10 wasted years, the charts also show that Britain’s economic problems long predate the Brexit process that so dominates policy discussion today. Rather than obsess over how the EU exit negotiations are going, we would be far better served by focusing now — not in two years time — on the big fundamental challenges of reinvigorating business investment, innovation and productivity growth. Set against these challenges, the exact form of Britain’s economic relations with the countries of the European Union is little more than a sideshow. Britain’s problems existed before the Brexit vote and will not be significantly impacted one way or the other by Brexit itself. What matters much more are the domestic policies pursued to help fire up the creation of new businesses, new industrial and service sectors, and the well-paying jobs that would come with them.

Productivity is the best indicator of how much an economy is delivering for its people. And Chart 1 shows that productivity has been stagnant since before the financial crash. It fell again at the start of this year, once more dipping below the level at the end of 2007. (The dotted vertical lines on all the charts mark the peak of economic activity during 2008, before the impact of the financial crash really hit home.)

This ‘lost decade’ in how much can be produced in an hour of work is unprecedented since the take-off of the Industrial Revolution at the end of the 18th century. The 20 per cent gap with what would have been produced this year if pre-crash trends had persisted puts into perspective the anticipated four or six per cent hit to the economy that the pessimists forecast from Brexit by 2030. The real shortfall is not just testimony to how bad things have been since 2008; it also reveals the artificiality of the earlier period, flattered by the froth of living off expanding debt.

Flat productivity accounts for the decay in incomes experienced by many people. Chart 2 shows how average earnings for people lucky enough to be in full-time work fell away after the financial crisis and remain well below pre-crash levels. After some recovery in 2015 and 2016, the consensus expectation is of real wages falling again this year.

Lagging business investment – Chart 3 – drives the stagnation in Britain’s productivity levels that has constrained our earnings. Without serious investment in new and improved technologies, workers are unable to produce more to justify higher wages. Investment today remains below that at the time of the financial crash and has been falling again since the middle of 2015 (before the EU referendum date was even announced).

Reinforcing the dearth of transformative investment is the decline in resources devoted to researching the next wave of discoveries and inventions that could drive innovation. Chart 4 illustrates the long-run decay in research and development (R&D) expenditure, which has continued to limp along at meagre rates since the crash. Low spending on R&D by business and government is a consequence of their cost-cutting in straitened times. It undermines the potential for future productivity growth.

Chart 5 shows the development with potentially the most destabilising consequences. Although high debt underpinned the financial fragilities that burst through in the crash, there has been little attempt since to cut the amount of outstanding borrowing. On the contrary, the combined level of debt carried by corporations, households and the government is higher than it was before 2008, by the extent of the equivalent of about half of annual national output. Even the Bank of England, which has been to the forefront in encouraging banks to lend more, has been warning of a looming ‘spiral of complacency’ about mounting personal debt. Moreover, more debt also compounds the productivity trap by sustaining many low-profit or loss-making zombie businesses.

The contradictory attitude to debt from officialdom is no aberration. It highlights how the next financial crisis is being stoked, unintentionally, by the post-crisis actions of state authorities. At the time of the crash, everyone could see how the state had to step in to bail out banks and other institutions that were on the verge of collapse. This exposed the illusion that we had been living under a free-market, neo-liberal regime. Since the crash, state economic intervention has had to become even more pervasive to stave off a more serious slump.

Nowhere is this more evident than in the central banks pumping liquidity into the system through near zero interest rates and their massive purchase of bonds and other financial assets, known as quantitative easing. As a result, the total balance sheets of the central banks of the US, Japan, the Eurozone and Britain have more than tripled from less than $4 trillion before the crash to above $14 trillion now — equivalent to one fifth of global annual output. These actions may have held off a slump but they have not stimulated the desired recovery in production. Instead they have merely boosted, artificially, the prices of bonds, shares, property and most other financial assets.

This is a Ponzi scheme to surpass all others. One wing of the state — central banks — has been lending money to another wing — government treasuries — enabling them to continue to borrow and spend at low interest rates. But it is these same government bodies that guarantee the viability of the central banks that are lending to them.

Meanwhile, the main real-economy effect is the creation of even more debt and financial bubbles. Now, the central banks are pondering how to normalise — that is, reduce — their balance sheets. What could possibly go wrong…? And given that the emergency exceptional actions taken by the central banks after the last crash remain the new norm of monetary policy, who is left to provide a lifeboat after the next crash?