Getting rid of Zuma and his corrupt cabal won't solve South Africa's problems. 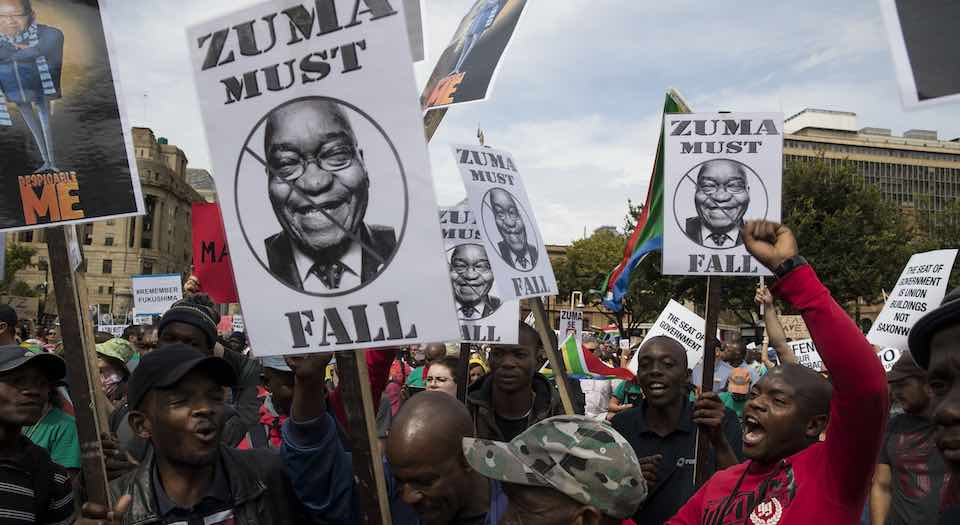 Some things in African politics are as predictable as the rising and setting of the sun. So it was with the latest vote of no confidence in beleaguered South African president, and African National Congress leader, Jacob Zuma. Because, as with the previous seven votes, it failed.

Yet while the outcome was predictable, other aspects of the vote were surprising. For the first time during Zuma’s reign, 35 of the 223 ANC MPs who voted broke rank and sided with the opposition. This has boosted the confidence of the opposition, which increasingly believes it can unseat the ANC at the 2019 General Election. All sides now appear to agree that Zuma is the opposition’s greatest electoral asset, with several polls showing that, across race and class, trust in Zuma has collapsed since he was returned to power for a second term in 2014.

Coming as this does on the back of last year’s first major electoral setbacks since the advent of democracy in 1994, when the ANC lost control of three major city governments in Pretoria, Johannesburg and Port Elizabeth, it does look as if the ANC’s hold on power could be seriously threatened for the first time since the end of Apartheid. At the very least, the fact that 35 ANC MPs voted against Zuma shows that the factionalism and deep, painful divisions within the ANC can no longer be contained. The run-up to this December’s national elective conference, at which the ANC will elect Zuma’s successor, will show whether the ANC can get its act together.

However, there is a danger to the political and media focus on Zuma and his so-called state capture (his use of state institutions to enrich family, political allies and friends). It diverts attention and energy away from the need to provide a progressive political solution to South Africa’s problems. The idea that Zuma, alongside a few businessmen, such as the admittedly dubious Gupta family, are to blame for the dire economic and social state in which South Africa now finds itself is wrong. The crisis goes far deeper than Zuma and his corrupt cabal. It reaches into the heart of South African politics, which desperately needs a viable alternative to the ANC, which has been in power for a quarter of a century.

Of course, Zuma and his friends do need to be held to account. But the narrow concentration on corruption suggests that getting rid of Zuma by itself would solve South Africa’s problems. It wouldn’t. The difficulties most South Africans face are a result not of Zuma himself, but of an ANC government committed to upholding market practices at people’s expense. Yet Zuma’s opponents are content to mobilise people behind a campaign that is, in essence, a defence of the institutions of the state. Offering an anti-corruption pose instead of a genuine political alternative, the movement against Zuma is reinforcing an anti-politics climate, in which politicians are seen to be only in it for themselves.

Zuma is a problem, but not in the way some think. He is a particular expression of the general problem of narrow self-serving careerism which is rife within the ANC, and, it must be said, much of the opposition, too. No faction has ‘captured’ the state. Rather, the state has been under the control of the ANC, which has shown itself to be the party of South African capitalism. Getting rid of Zuma and instituting a few reforms won’t change that. What it will do is let the ANC off the hook.

Since the end of Apartheid in 1994, the ANC has overseen an economy which has increased inequality, not reduced it. Under successive ANC presidents, including Nelson Mandela, the state has built an economy where 60 per cent of all income earned in South Africa is in the hands of 10 per cent of the population, including a small coterie of black politicians and entrepreneurs. Corruption and incompetent managerialism has bled the economy to the point where it is now officially in recession.

The statistics tell a bleak tale: 8.9million working-age people (36.4 per cent) are unemployed; 63 per cent of the population live in poverty; 13million people go to bed every night without food, while another 14million face hunger at some point each month. And lest we forget, there was the ANC’s own Sharpeville moment in Marikana in 2012, when security forces killed 34 black miners whose only crime was to strike for a living wage. It was not Zuma’s ‘state capture’ that led to the grotesque spectacle of posthumously charging the strikers with crimes alleged to have been committed during the strikes; rather, it was the ANC-controlled state as a whole, being wielded on behalf of the rich against the poor. This is the reality of South Africa today.

The campaign against Zuma and his state capture is not just a distraction. It is also an admission — an admission that the politics of There Is No Alternative dominates the outlook not only of the ANC, but of the left and the opposition, too. Far from learning anything from 23 years of ANC rule, the left continues to live in the past while disarming the masses for the future. The challenge of building a political alternative is still to be met.