No, a second referendum would not be more democratic

We can’t let the enemies of democracy pose as its guardians. 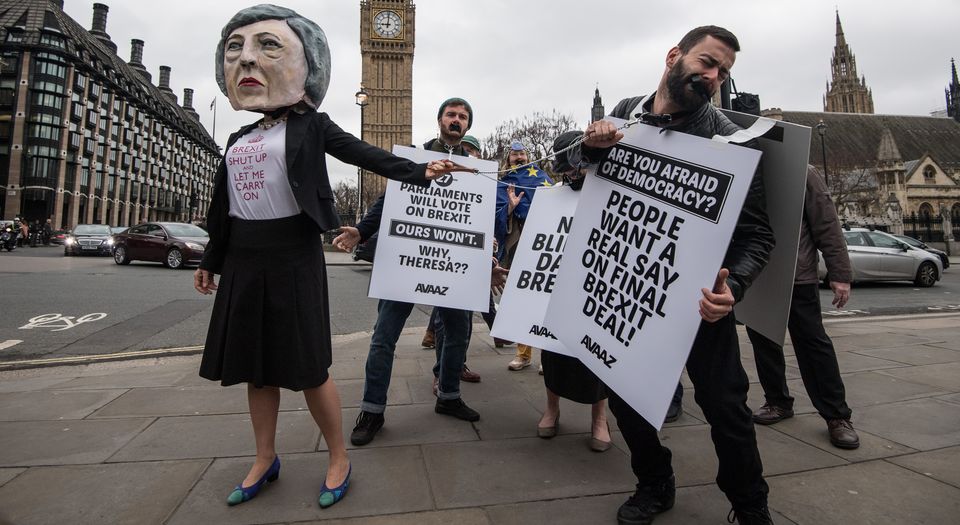 In his seminal 1946 essay, ‘Politics and the English Language’, George Orwell wrote of the ways political language can be distorted to the end of propping up tyranny. ‘In the case of a word like democracy, not only is there no agreed definition, but the attempt to make one is resisted from all sides’, he wrote. It was one of many words often used ‘in a consciously dishonest way. That is, the person who uses them has his own private definition, but allows his hearer to think he means something quite different.’ In the elite-Remainer efforts to crush Brexit, these words ring as true today as they did then.

This week, in an evening Twitter tirade, James Chapman – Tory Remainer and former chief of staff to Brexit secretary David Davis – aptly demonstrated Orwell’s point. It is ‘past time for sensible MPs in all parties to admit Brexit is a catastrophe, come together in [sic] new party if need be, and reverse it’, he tweeted, punctuating it with the hashtag #euref19. He suggested this new party – committed to crushing the will of the 17.4million who voted Brexit – be called, you’ve guessed it, the Democrats. He then went on, Nicolas Maduro-style, to suggest that his political opponents, Brexit campaigners like Boris Johnson, should be imprisoned.

For this is the latest elite-Remainer play: casting their arguments for anti-democracy in the glow of democracy. It’s how they’re now dressing up their calls for a second EU referendum, which Chapman’s hashtag nodded to. Though the only party to advocate a second referendum, the similarly Orwellian named Liberal Democrats, barely got a look in during June’s snap election, the appetite for a second vote has grown among the elite. In a recent much-retweeted piece for the Guardian, Vernon Bogdanor quoted the unelected Lord Butler, who pondered why Brexiteers ‘who base arguments for Brexit on the will of the people are now opposed to consulting the people on the outcome of the negotiations’.

The very people who a few months back were saying that those who invoke ‘the will of the people’ are crypto-Stalinists, are now trying to turn it on their opponents. In his disastrous Andrew Neil interview before the election, former Lib Dem leader Tim Farron even invoked the phrase ‘popular sovereignty’ in arguing for a second vote. As transparently cynical as their appropriation of democracy is, it’s a striking development. It reminds us that the enemies of democracy can’t come out and say it. That’s why they have lie to us, and perhaps even themselves. That’s why they try to square setting up a party called the Democrats with the expressed purpose of blocking the biggest democratic mandate in British history.

But it also means it’s more crucial than ever for real democrats to make clear what we mean by the d-word. The stakes couldn’t be higher. After months of saying ‘Brexit is settled, calm down’, the Remainer elites have taken June’s inconclusive election as proof that Brexit is back on the table. A weakened government, and a Tory Party now far more committed to holding its feeble self together than seeing through the people’s will, has renewed calls for Brexit to be softened. And with a growing realisation that even a ‘soft’, ‘off-the-shelf’ EFTA- or EEA-style deal is unlikely, politicians are praying that a bad exit deal will provide the perfect excuse to keep Britain in the EU entirely. So let’s put some myths to bed.

First up, asking the people twice, just to make sure, isn’t democratic. It’s the political equivalent of double jeopardy. Just as the state shouldn’t be allowed to try the same person over and over in the hope of locking him up, nor should politicians be able to re-run votes in the hope they’ll get the ‘right’ answer next time. It’s also straight out of the Euro-elite playbook. Just ask the Irish. When they rejected the Nice Treaty in 2001, they were slammed by the pro-EU set who declared Ireland was about to ‘return to poverty’. After a second vote, Yes squeaked home. They pulled the same trick in 2009, after the ‘ungrateful’ Irish rejected the Lisbon Treaty.

Yes, Brexit is a big political decision – that’s why the referendum activated so many voters. But implementing the vote is not the same as ‘buying a house before getting the surveyor round’, as some never tire of suggesting. And rejecting it is not the same as rescinding your offer once you realise there’s a touch of subsidence. It would be the equivalent of Jeremy Corbyn winning a landslide tomorrow and politicians, lords and lawyers keeping him away from No10 because the markets aren’t happy about it and – who knows? – the public may change their mind. Why not wait it out a bit? Have another vote. Perhaps after market uncertainty brews and voters become sufficiently demoralised! Remainer Corbynites should take note.

Second, another referendum simply ‘on the deal’ would be nothing of the sort. It’s a barely concealed attempt to implement Remain at the 11th hour. Brexit negotiations were always going to be tough. We’re up against an oligarchy in a fight for its own survival, not just from the threat of Brexit but from the European peoples inspired by it. Most Brexit voters are under no illusions that the road ahead may be rocky, and the spitefulness of this anti-democratic institution is precisely why many want out. But a second vote would only give the EU more incentive to give us a bad deal – one that, elite Remainers hope, would allow them to browbeat voters into accepting the devil they know.

The third and final argument that we need to knock down is the idea that the current parliamentary gridlock is proof that there’s a democratic case to thwart Brexit. Many say June’s election result is proof that the electorate have rejected ‘Hard Brexit’ (or as I like to call it, Brexit), by refusing Theresa May her majority. This has led the likes of Labour’s Sadiq Khan to suggest we need another referendum or a General Election fought explicitly on the grounds of Remain vs Leave. But the mixed result of a General Election, fought on a number of fronts, in which the two main parties at least pretended to be in favour of implementing Brexit, is not a repudiation of the resounding result of a crystal-clear in-out vote.

What this gets to the heart of is the chasm between the public and the political class. That the vast majority of MPs back Remain, while a majority of the public backed Leave, that many MPs want to thwart Brexit while the vast majority of voters – Remainers included – know it must be upheld, speaks to how unrepresentative our representative democracy has become. That’s why the EU referendum was such a necessary corrective, and its result such a huge blow to politicians’ authority. But the only answer to this impasse is to carve out a new politics more in line with people’s interests, and elect people who truly represent us. It doesn’t mean we should let the existing set use the power that we lend them to override our collective wishes.

To come back to Orwell, what we’re seeing here is the wilful distortion of democracy, the use of that historic word in a ‘consciously dishonest way’. When elite Remainers pose as the guardians of democracy, they’re using their ‘own private definition’, one that is the precise opposite of what democracy actually means. We can’t let them get away with this. That means saying No to a second referendum, and to insisting that after more than a year of delays and plotting, whoever’s in government must commit themselves to leaving the EU and all its sovereignty-smashing institutions. And it means maintaining vigilance, and not giving in to the moral blackmail and the war of attrition. The fight for democracy, and what it really means, is only just beginning.