Venezuela: down with this Bonapartist regime

The people suffering under Maduro need our solidarity, not sermons. 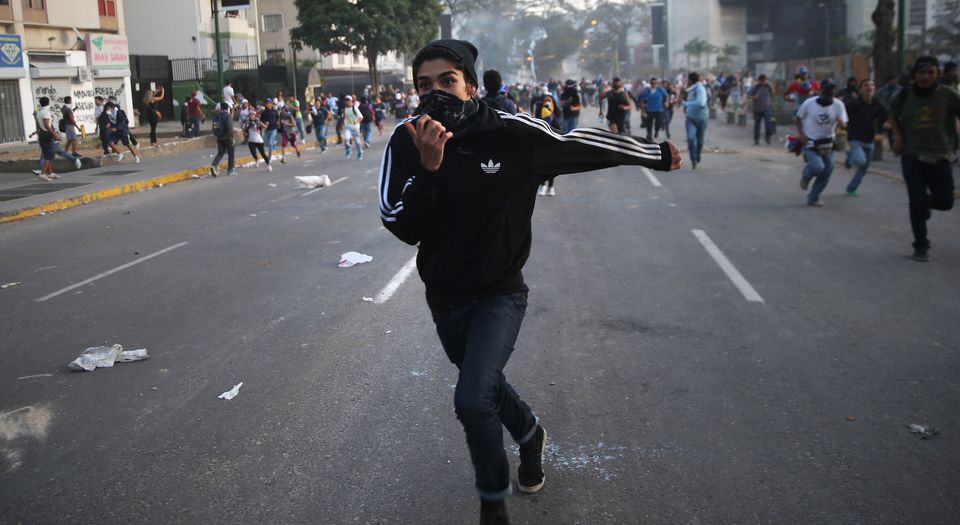 To see the dangers of international displacement, of seeking political meaning in other people’s mayhem, look no further than the Venezuelan disaster.

Here we have a nation’s tragedy being turned into a platform for personal posturing by both Western leaders and Western radicals. On one side, the rulers of the West spy in the descent of Venezuela into anti-democratic authoritarianism an opportunity to demonstrate political steadfastness, to make a rare performance of grit and enlightenment by condemning an increasingly dictatorial foreign regime.

And on the other side, sections of the Western left refuse to condemn the Bonapartist abomination that is Maduro’s Venezuela because they want to hold it up as a ‘Socialist’ alternative to Western neoliberalism. Their need for living, breathing if utterly unfree proof that their radical posturing is not in vain blinds them to Maduro’s crimes against democracy. Both sides treat Venezuela not as a nation to be understood or a people to be offered solidarity, but as a personal moral fiefdom upon which they might discover or prove something about themselves.

What is happening to Venezuela should alarm anyone keen on freedom and democracy, especially those on the left for whom all politics ought surely to be about the expansion of human autonomy. Tensions have been rising in Venezuela for years. There have been running battles in recent months between protesters and the regime of President Nicolas Maduro, who succeeded Hugo Chavez in 2013.

For much of the past four years, Maduro ruled by decree. His approval rating has floated around the 20 per cent mark for months, following hits to the economy, shortages of food and drugs, and the Maduro-favouring Supreme Court’s attack on the authority of the legislature. Things intensified at the weekend with Maduro’s holding of an election for a new National Constituent Assembly. An NCA is a temporary parliament with extraordinary powers: to rewrite the constitution, dismiss officials, put off general elections. Given the opposition’s boycott of the NCA, it is stuffed with Maduro sympathisers. It is expected to dismiss the attorney general and sections of the legislature sympathetic to the opposition. It could theoretically cancel forthcoming elections in which Maduro and his political machine expect to do badly.

On Sunday, NCA election day, thousands took to the streets to signal their opposition. Ten people died. Maduro’s people claim turnout was 41.5 per cent, which would be low enough; the opposition says 88 per cent of people abstained. That Maduro will likely now use the NCA to shore up his own power and attack both the rule of law and the existence of oppositional politics is in keeping with his recent autocratic moves. Journalists in Venezuela have come under attack for what Maduro calls their ‘media war’ against him. Maduro has used emergency laws to enforce censorship without congressional approval, including the closure of oppositional online TV stations. And in recent days opposition leaders have been arrested. The picture is a grim one, of a people’s democratic rights and freedom to speak and read as they see fit being throttled by a government bent on maintaining its authority.

The response to these events by Western observers has been worse than useless. It might even deepen Venezuela’s political rot, either by mystifying it or reducing it to a black-and-white morality play. Some of the Western left have given a rather disgraceful account of themselves in response to Venezuela’s strife. Too many have been silent or even sympathetic on Maduro’s centralisation of political power. Having cheered the Chavez government as proof of the continued existence of what they view as Socialism, they’re reluctant now to condemn his heir.

What they fail to realise is that there’s nothing Socialist about Maduro. His is a Bonapartist regime, of which Latin America has had many – though Maduro’s system is more bizarre. Bonapartism is the name given by Marxists to leaders who take power when no single class is in a position to do so. The Bonapartist style tends to emerge when the capitalist class is too weak to exercise power in its own name and when the working class is too bereft of political leadership to do anything about it. In The Eighteenth Brumaire of Louis Bonaparte, Marx described how, following the defeat of the working class in the European revolutions of 1848, Louis Bonaparte, nephew of Napoleon, seized power in France on the back of the lower classes. As the working class had been roundly beaten and much of the European bourgeoisie was in a state of ‘ruin’, as Marx put it, Louis Bonaparte was able to depict himself as being above the class struggle and then to ride to power through appeals to an ‘indefinite, disintegrated mass’ – the poor, the disaffected.

Latin America has gone through many modern-era spins on Bonapartism, from the rule of Peron in 1940s Argentina to Allende in Chile in the 1970s. The Chavez / Maduro style of Bonapartist rule is far more economically and morally diminished than those, having no serious economic ambitions aside from reliance on oil revenues to engage in a certain amount of redistribution of resources. And yet some on the Western left cannot bring themselves to condemn the rulers of Venezuela. It isn’t hard to see why. When Chavez was in charge, they made Venezuela their heart in a heartless world, the one new example of ‘Socialism’ they could cling to as George W Bush ran America and the fortunes of old-left parties declined across the Western world.

Repulsed by what they view as their own conformist populations, Western leftists wallowed in the seeming exoticism and radicalism of Chavez’s Venezuela. It became a moral sanctuary for a left bereft of new ideas and increasingly isolated from their own publics. And so they couldn’t see, or wouldn’t see, the problems with Chavez, which nurtured the system Maduro now oversees. Some on the left discourage critical observation. Some even say we must stand by Maduro to defend the revolution. What revolution? This is delusion. Worse, they’re willing to stand by as the people of Venezuela are condemned to an illiberal, undemocratic future if it means they can sustain their mental getaway of ‘Socialist Venezuela’.

But what Western leaders are doing is no solution, either. Their rush to harry and isolate Venezuela, to impose sanctions on it, to threaten it with tougher and tougher measures if it doesn’t change, has the terrible effect of further internationalising this national tragedy. It could also take the initiative out of the hands of those protesting against the regime.

If it is Venezuelan democracy we are interested in – and we really should be – then we must question the idea that outside powers have the authority, or the ability, to use pressure to decide how and when that democracy should be restored. This is a contradiction in terms. In further isolating the Maduro regime, Western rulers could even intensify his belligerence in relation to the opposition and make a democratic resolution more difficult. Experience tells us that knee-jerk, showboating intervention in another state’s affairs, whether of the economic or military variety, can entrench divisions and extend the tension.

Venezuela is not your playground. It isn’t your ‘Socialist’ dreams made flesh or the latest bastard state you can look good by condemning. It’s a real country, with real people, who are suffering. Solidarity is what they need, not the delusional talk or war talk of outsiders.