Why the left should be cheering Brexit

Brexit paves the way for a radical rethink of society. 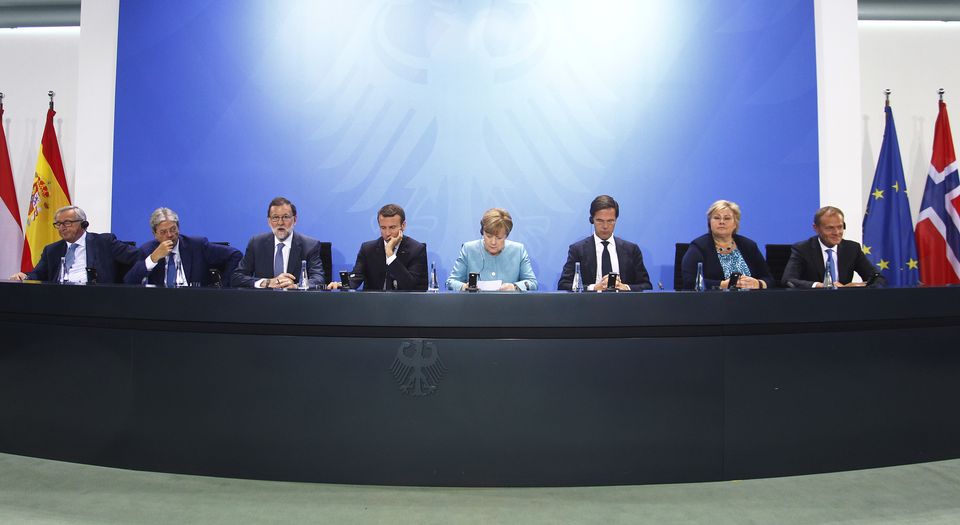 The left-wing case for Brexit was never predicated on the argument that the UK would suddenly become a land of milk and honey after a Leave vote. Only the most naive would have believed such a thing. Those of us in the labour and trade union movement who campaigned for an exit from the EU were quick to acknowledge that a Tory government wedded to austerity and cuts would remain in charge, at least for a period, after the referendum.

But, for us, Brexit wasn’t just about restoring democracy and self-government, important though those principles are. It was also about creating the space for a better government to come along at some point and, free from the shackles of restrictive EU laws, implement a radical manifesto in the interests of working people. In other words, Brexit is an insufficient but absolutely necessary step to the kind of society that any socialist or trade unionist would wish to see.

The spectacle of figures on the left lining up during the referendum campaign alongside the ranks of the establishment – a Tory government, the IMF and CBI, the banking industry et al – to defend an explicitly anti-socialist institution, and one defined by its commitment to the rule of market forces, privatisation and austerity, was always an odd one. Their main argument – that British workers would, outside the EU, be lambs to the slaughter of the same people and institutions fighting so hard to stay inside – was nothing more than confused cynicism masquerading as strategy.

Leaders of the British left will usually think nothing of giving their full-throated support to workers in any other part of the world throwing off the yoke of undemocratic power. But not in their own backyard. Workers in Britain were apparently incapable of defending themselves against the Tories. So it was better the undemocratic neoliberal devil you know.

Some of them still speak of Brexit as a setback. But what happened on 23 June 2016 should be seen as a genuine democratic revolt. It is difficult to understand in what world anyone on the left would see working people striking back at the heart of the establishment – and defeating it – as some kind of setback.

A little bit of humility on the part of left-wing Remainers would be welcome. Their predictions have largely turned to dust. We were told that a Leave vote would lead to the resurgence of the right wing of a strengthened Tory Party (almost certainly to be led by Boris Johnson), an emboldened UKIP, the weakening of the left and a proposed bonfire of workers’ rights. These prophesies have so far turned out to be about as accurate as the dire warnings of an immediate recession, rising interest rates and rocketing unemployment.

There are undoubtedly serious underlying problems with the British economy. But those problems existed long before the EU referendum.

One side effect of the Leave vote has been the fall in the currency. Yet why would anyone on the left bemoan this, when the decades-long overvaluation of the pound led to the destruction of so much of our manufacturing base and so many thousands of jobs?

In any case, how strange it is to hear socialists and trade unionists argue that the limited disruption caused to the money markets since the referendum has been too high a price to pay. If we on the left are serious about bringing about a radical transformation of the economic system, we had better get used to the idea that global finance might kick up a bit.

In delivering such a huge blow to the EU project, British voters weakened one of the pillars of austerity that has caused so much suffering, and gave hope to others across Europe that they could do the same.

Outside the EU, we will be free of the wretched Stability and Growth Pact – which requires the UK to ‘endeavour to avoid’ a budget deficit of more than three per cent of GDP – and we will be able to invest in our people and industry; free of EU competition law which forbids the nationalisation of industries like the railways and steel; free of restrictive rules on state aid; free of the Single Market, the very embodiment of all-pervasive capitalism, with its categorisation of human beings as mere commodities.

That’s why the characterisation of Brexit as a defeat for the left and a victory for hardcore nationalism was always wrongheaded. The EU is not – never was – the progressive, benevolent force that its left-wing supporters claim it is.

There is a growing desire throughout the country for an end to austerity and privatisation, and their replacement with an economic strategy built around full employment, investment, decent wages, public ownership and the protection of industry. Brexit clears the path for it.

Paul Embery is national organiser of Trade Unionists Against the EU.