Helmut Kohl and the lost promise of reunification

Germany is yet to realise the democratic potential of 1989. 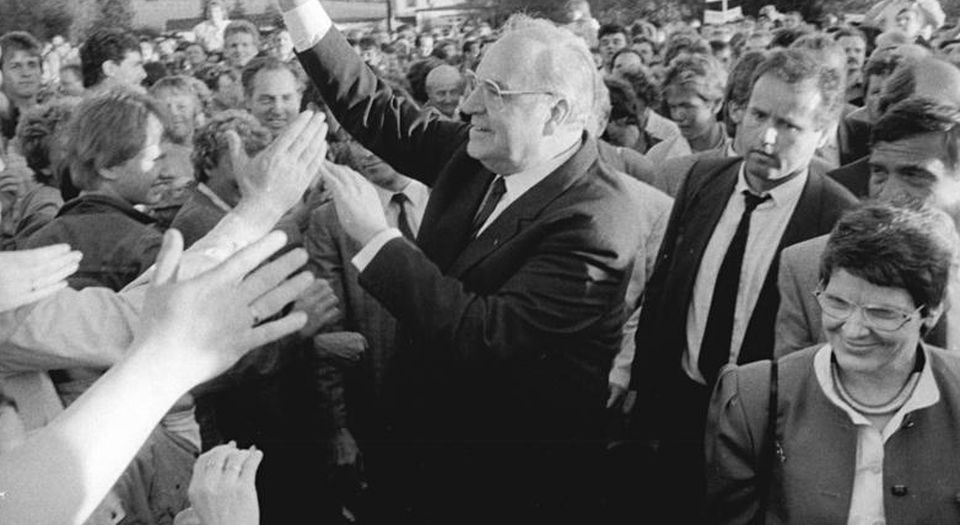 Helmut Kohl was German chancellor from 1982 to 1998. He was elected four times, making him this nation’s longest-serving chancellor. Most famously, he managed the German reunification process.

With such a legacy, you would be forgiven for thinking he was one of Germany’s most popular politicians. But the obituaries following his death last Friday reflect the ambivalence many feel towards him. ‘Kohl: honoured and scorned’ was the apt title of one newspaper’s obit. Most agree he was a man with outstanding political instincts, who was only truly popular once: at the time of reunification. His undoing was that the sense of disorientation and exhaustion, which had characterised West German politics before 1989, caught up with him all too quickly after the fall of the wall.

Kohl, then leader of the Christian Democratic Union (CDU), became chancellor of a West Germany riddled with uncertainty and fear. He was appointed after the Social Democratic Party (SPD) chancellor, Helmut Schmidt, lost his coalition partner and his majority in parliament. After Schmidt’s fall, the liberal commentator Ralf Dahrendorf published a famous essay, in which he spoke of the end of the era of social democracy and postwar growth. It was the time of the rise of the Green Party, and growing anti-Americanism. There was fear of environmental disaster (‘Waldsterben’ – ‘forest decline’ – was one of the scares) and of a nuclear catastrophe, with huge demonstrations against the spread of more weapons in Germany. Domestic terrorism, in the form of the left-wing Red Army Faction, was also interpreted as a sign of a ruptured postwar consensus.

In the elections held some months after Schmidt’s fall, Kohl won a clear majority by promising a ‘spiritual-moral change’ (‘geistig-moralische Wende’). The German intellectual left reacted with a snooty campaign against the new chancellor, depicting him as intellectually inferior (referring to him as ‘the pear’) and a dangerous throwback to old, conservative times. But not only did they underestimate him, they were also wrong. Far from being a conservative throwback, Kohl was a pragmatist whose political style was a precursor to much of the technocratic, managerial politics of modern times, which came with a sheen of progressivism. He opened his cabinet to more women (including the young Angela Merkel). He constituted two new ministries: one for women and one for the environment. And although he was steadfast after the Chernobyl disaster – an industrialised country like Germany needed atomic power, he insisted – he took up many greenish demands.

The moral-spiritual turn, however, proved largely empty of content, and Kohl looked increasingly towards new areas of policy. There were two priorities: easing the tensions of the Cold War and carefully renegotiating West Germany’s political role in the world. (At the time, Germany was referred to as an economic giant but a political dwarf.) In the first case, the government continued the SPD’s policy of détente. Three months after the election, his government negotiated a million-dollar credit deal with the GDR (East Germany) in exchange for improvements in travel regulations for German citizens. This was a deal which, as Kohl biographer Wolfram Bickerich points out, gave the chronically bankrupt GDR some respite, and probably – though inadvertently – postponed its final breakdown by several years.

The other area of policy was the maintenance and improvement of German-French relations. (This too was not new, and followed on from Schmidt’s and Giscard d’Estaing’s close cooperation.) German politicians emphasised the importance of European cooperation, within what was then the European Community. The new Germany, so the argument went, had to be a European Germany – this case was made again in the run-up to the signing of the Maastricht Treaty after reunification. France’s new president, Francois Mitterrand, whose promise of a socialist renewal of France had also failed, was happy to play along. The photo taken in 1984 of Kohl and Mitterrand holding hands on the site of the First World War Battle of Verdun became one of the defining images of Kohl’s early chancellorship. But it was an image still deeply entrenched in the legacy of the war, and walking around in graveyards became something of an obsession. (In 1985, Kohl and US president Ronald Reagan visited German war graves in Bitburg, as part of the 40th anniversary of the end of the Second World War. It ended in a scandal, after it was revealed that some of the graves hosted former SS members.)

In 1989, shortly before the events in Eastern Europe and the GDR shook the world, Kohl’s time seemed over. The economy was still struggling, new right-wing parties were gaining ground (always a sign of the weakness of the CDU), several scandals involving his party had shocked the country, and Kohl’s approval ratings had plummeted. According to one poll, only 23 per cent of West Germans thought of him as ‘competent’, and there were plans to oust him at the upcoming party congress. But the mass protests in the East freed West Germany of its sense of sclerosis, and Kohl was the first to grasp the situation.

After the Berlin Wall fell, and after an initial period of shock, he realised that he needed to act quickly. He started to concentrate fully on reunification. The man, termed ‘indecisive’ only weeks earlier, made an audacious plan. It included calling for General Elections and the introduction of the Deutschmark in areas of the East. Against the advice and will of Germany’s powerful central-bank governor, Kohl pushed through his plan of a 1:1 exchange rate. Parallel to this, he managed to win the support of US president George Bush (who became his most important ally in the West).

Kohl, who was never a great orator, travelled to almost every city in the East, reaching over a million people, and found the right tone. While leading members of the Green Party and the SPD were still confused and ambivalent, some openly mocking East Germans for their consumerist desires and hunger for bananas, Kohl promised ‘blooming landscapes’ and a welfare system. Voting turnout in the 1990 elections was a stunning 93 per cent, and the CDU came out as the strongest party in both East and West Germany (winning 192 parliamentary mandates against 91 for the SPD). The SPD’s assumption that West Germans’ fear of reunification would bring them a majority had not come to pass.

The sense of optimism and clear-sightedness of voters in that election was lost all too quickly, however. Kohl had promised the people the benefits of a free-market society and democracy. When it became clear that economic recovery would prove more long-term and difficult, and that there weren’t thousands of investors waiting to develop the East, he fell back into his old mould. Old West German politicians, whose careers had long ended, started moving to the East. These new leaders lacked roots in their constituencies and were often seen as nothing more than top civil servants. The line at the time was, ‘Fängst Du an zu rosten, kommst Du in den Osten’ (‘once you begin to rust, you go to the East’).

In 1990, citizens were told they would be able to take control of their own country and Europe, as part of a free and democratic society. But they began to feel that their vote counted for little. Shortly after the Deutschmark was introduced, the signing of the Maastricht Treaty in 1992 – partly a way of alleviating other European countries’ fear of a reunified Germany – marked the beginning of the end for the popular new currency. Then there was the war in Yugoslavia, in which Germany intervened, and which people in the East observed with much greater scepticism than their fellow Germans in the West.

There was a series of political scandals, and although Kohl’s CDU still came out strongest in the 1994 elections, it lost 3.3 per cent of its votes in the East. The clearest sign of disappointment and protest was that the Party of Democratic Socialism (PDS), the successor to the East German Socialist Unity Party of Germany (SED), gained by 8.7 per cent (taking 19.8 per cent in total), making it the third-largest party in the East. Kohl reacted to all of this with increasing incomprehension, resorting to his old tactic of ‘sitting out problems’ and calling his critics ungrateful. In 1998, he lost the elections in both East and West.

In 2000, at the height of a party funding scandal in which Kohl was heavily implicated, Angela Merkel ousted him as party leader. It cost him what was left of his reputation. But it was only a symptom of the crisis of the party. The CDU had lost its purpose and direction, and was desperately trying to win back support. Kohl, the party patriarch, had to make way for Merkel, whom he once famously referred to as ‘his girl’. Merkel, who became chancellor in 2005, is about to catch up with her former mentor by most likely winning a fourth term in office this year. But the golden moment of modern German history, when Germany might make good on the democratic promise of 1989, belongs to someone yet to come.

Sabine Beppler-Spahl is head of the board of the liberal think-tank Freiblickinstitut e.V., which has published the Freedom Manifesto. She is also the organiser of the Berlin Salon.