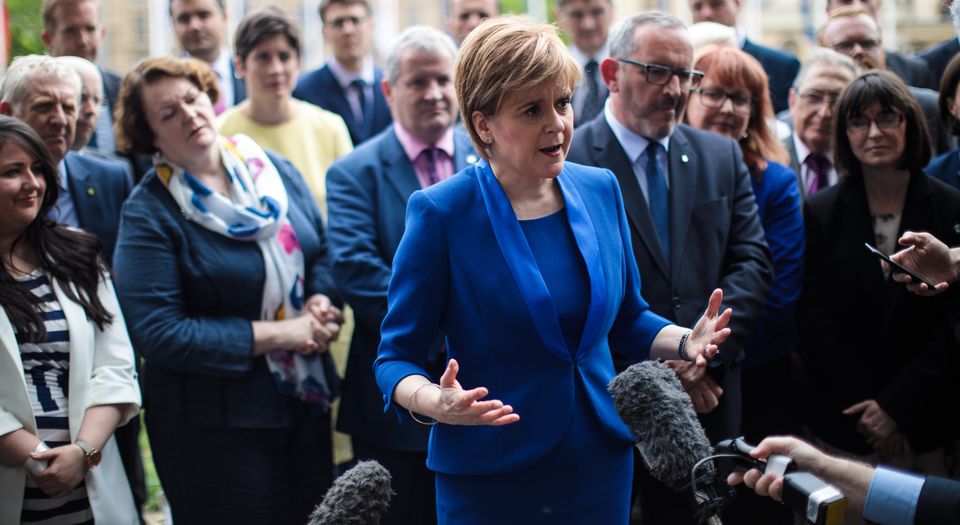 Nicola Sturgeon probably doesn’t feel she has much in common with Theresa May. Scotland’s first minister and the UK’s prime minister are both female politicians holding down important jobs, but otherwise they seem poles apart. But they have another thing in common now: both won this month’s General Election, yet were left feeling as if they’d lost.

The SNP won 35 of the 59 seats up for grabs in Scotland on 8 June, with 36.9 per cent of the popular vote. Compared with 2010, when the SNP won just six seats, that’s a fantastic result. It’s far and away their second-best performance at a General Election and a clear majority of the seats in Scotland. In any other circumstance, it would be viewed as a triumph. But sadly for Sturgeon, the 2017 result pales in comparison with the SNP’s near clean sweep in 2015, when the party won 56 seats and 50 per cent of the popular vote in the aftermath of the independence referendum in September 2014. Losing 21 seats in that context is a slap in the face from voters.

And it wasn’t just the seats the SNP lost, but the MPs, too. The party’s leader in Westminster, Angus Robertson, lost his seat in Moray. But an even bigger scalp was Alex Salmond, the party’s former leader and for a long time the biggest fish in the small pond of Scottish politics, who lost his seat in Gordon. And just to rub salt into the wounds, both men lost to Conservatives.

Despite what happened south of the border, in Scotland, this General Election result has been widely seen as a triumphant comeback for the Conservatives. In 1997, the Tories won precisely zero seats in Scotland, and have been on life support ever since, returning just one Scottish MP in each election from 2001 to 2015. But this time around, the party won 13 seats. Much of the credit has gone to the Scottish Conservative leader, Ruth Davidson, who is everything Theresa May is not: passionate, affable, comfortable in debate and with meeting people, and occasionally even funny. No wonder many Tories south of the border are seriously considering Davidson as a future leader of the national party.

Moreover, Davidson is a lesbian, and therefore an embodiment of the modern, inclusive Conservativism the party has long been trying to push. When it became clear that the Conservatives were in talks with Northern Ireland’s Democratic Unionist Party (DUP), the last holdouts against same-sex marriage in the UK, Davidson tweeted the text of a speech she gave at Amnesty’s Pride event in Belfast last year in praise of same-sex marriage. It was a clear message to Theresa May that any deal with the DUP could not include any rolling back of lesbian and gay rights. As Davidson has pointed out, the Scottish Conservatives won more seats (13) than the DUP (10), and are not to be taken for granted.

She has also been using her relative success to throw her weight around in other areas, particularly around Brexit. On the Saturday after the election, Davidson told reporters: ‘What’s really clear is that the Conservative Party, having failed to win a majority, now needs to work with others. And that means that we can look again at what it is we want to achieve as we leave the European Union and I want to be involved in those discussions.’ She called for an ‘open Brexit’ that put less emphasis on controlling immigration, saying this was ‘about making sure that we tear down barriers rather than put them up. It’s about making sure we put free trade and economic advancement at the heart of the Brexit deal as we leave.’ The comments were widely interpreted as a demand to remain within the EU’s Single Market, rather than leave entirely and negotiate a free-trade deal, as is the government’s current plan.

But Davidson’s success can’t simply be put down to her personal qualities. In fact, the story of election night in Scotland was about a strong vote in favour of remaining not in the EU, but in the UK. If the Scottish Conservatives made a comeback in 2017, so did the two other big unionist parties, Labour and the Lib Dems. Indeed, there is plenty of evidence of tactical voting in favour of the Union and against the SNP, with enormous swings in some SNP-held seats towards whichever anti-independence party seemed most likely to win.

The Scottish Labour leader, Kezia Dugdale, certainly lacks Davidson’s easy confidence and rapport with voters. She is earnest and rather brittle. Yet Labour managed to increase its seats from one to seven, and barely did worse in the popular vote (27.1 per cent) than the Conservatives (28.6 per cent). This is a far cry from the recent past, when Labour was as dominant in Scotland as the SNP is today, and promoted the creation of the Scottish Parliament so that it would always be in charge of at least one part of the country. But given that before the election Labour was fretting that it might not even hold on to the one seat in Scotland it did have, the result was a significant confidence boost. Even the Lib Dems managed to win four seats, up from one in 2015.

The pro-Union vote in this election was clear. After the Brexit referendum result, Nicola Sturgeon used the prospect of leaving the EU as an excuse to raise the issue of independence again, which was previously thought to have been settled by the ‘once in a generation’ vote against independence in 2014. But after the 2017 General Election result, she conceded that ‘we have to acknowledge that the question of a second independence [referendum] was a significant motivator of votes against the SNP in this election, and we have to be attentive to that point’.

The result of the vote on 8 June gave the lie to the idea that because Scotland voted clearly to remain in the EU, while the UK as a whole voted to leave, there would be increased interest in the idea of independence (so that Scotland could remain in or rejoin the EU later). It is clear that the majority of Scots have far more loyalty to the United Kingdom than to that other union run from Brussels.