Maher and Griffin: in defence of bad taste

Comics should never apologise for ‘crossing the line’. 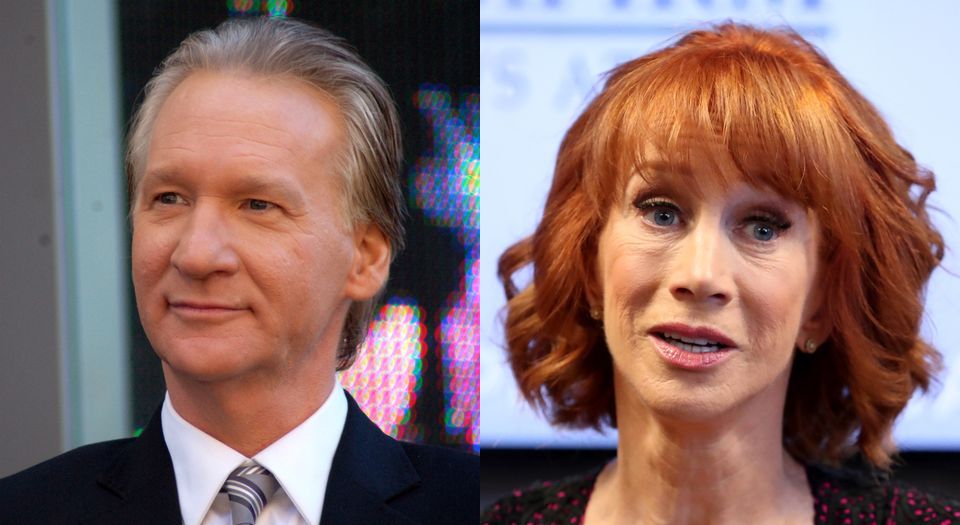 What is the point of celebrity apologies today? They accomplish nothing. The easily offended demand them but are always dissatisfied with them. They always demand more contrition and action, ideally of the career-ending variety. The apology itself is usually a hollow gesture, just a celeb’s attempt to keep his or her job in the face of fury. With a grovelling celebrity apology hitting the headlines every other day, the cycle of Twitter outrage and ritualistic begging for forgiveness grows ever more sinister and pointless.

American comedians Bill Maher and Kathy Griffin are the most recent victims / perpetrators of apologies. Maher for referring to himself as a ‘house nigger’ during a chat with with Senator Ben Sasse on his TV show Real Time, and Griffin for posting a photo of herself with a bloodied mannequin’s head resembling Donald Trump. It’s very unlikely HBO will take Maher’s show off air, but CNN has already announced that it is dropping Griffin from its New Year’s Eve coverage.

In their apologies, Maher and Griffin talked about the comedian’s instinct to ‘cross the line’. The problem is they failed in the comedian’s first duty – to be funny. Maher’s irrelevant improvised gag had the benefit of being judged by his studio audience, who are usually easily amused but who this time gave a distinctly muted response. They applauded when he clarified that it was a joke, however.

Griffin, on the other hand, cannot defend herself on grounds of spontaneity. Her provocation was the result of a photo shoot with Tyler Shields. Though it could be argued that the photo was intended more as a political statement than comedy, Griffin admitted it ‘wasn’t funny’.

The demand for swift punishment of those who offend comes at the expense of any serious debate about the controversy at hand. The 140-character demand for sackings suggests the transgression in question is so obviously immoral that we don’t even have to discuss it. It says there’s no room for disagreement, no grey area. Pundits literally count the hours it takes someone to apologise, so severe is the expectation of an apology. As the pack mentality grows, the whole question becomes one of what ‘we’ should do about ‘them’. There’s an illusion of active engagement, but really this is a passive exercise in groupthink and censorship.

Some of the more callous complainants will use an instance of offence to try to punish a person for other things they have said and done, even if it was years ago. In Maher’s case it was his longstanding criticism of Islam that many had in their censorious sights. Journalist Wajahat Ali tweeted: ‘People shocked at Bill Maher being racist-y, check [with] your Arab & Muslim friends. Been doing this for a LONG time, but he got hall passes.’ Author Reza Aslan said: ‘I can’t believe Bill Maher said something racist, said no Muslim ever.’ Others used the ‘house nigger’ controversy to attack Maher all over again for his interview with Milo Yiannopoulos. They always justify their campaigning as an attempt to do what’s best for society, but really they just want to remove certain viewpoints from the entertainment landscape, from public life.

With Griffin, the big issue is the target of her ‘humour’. Conservatives are making words meaningless by describing her photo as an ‘attack’ on the president, an act of ‘violence’ against him. Some say it’s treason. They’re also peddling a completely unverified rumour about Barron Trump being traumatised by the image. On the other side, the Huffington Post published an extraordinary defence of Griffin, comparing her to Charlie Hebdo. Remember, those satirists who were mercilessly killed by terrorists in their own offices? The Post says ‘she crossed the taste line – that’s all’, as if publications like this are ever so tolerant of contentious satire. Which of course they aren’t – as some of their commentary on Charlie Hebdo will attest.

The online outrage is so blatantly underpinned by personal prejudices and by extension double standards. Defenders of Maher won’t defend Griffin, and vice versa. People will defend offenders they generally like, but not those whose worldview or style they despise. There was a perfect example of this selective stupefaction from the Minnesota senator and former SNL writer, Al Franken. All this fury over Griffin has ‘no business being in our public discourse’, he claimed, emphasising that Griffin had ‘apologised… she actually begged for forgiveness and I believe in forgiveness’. However, Franken then cancelled his upcoming appearance on Maher’s show, despite Maher having also apologised. Doesn’t he deserve your saintly forgiveness too, Mr Franken?

It’s a shame that two people whose careers have been full of bad taste have felt the need to adjust for the times and give self-debasing apologies. This really tells us how strict ‘the line’ is becoming, in comedy and public life more broadly. Maher and Griffin’s crime wasn’t really what they said or did but how they think – their rude, provocative mindset. Their apologies speak to how commonplace the policing of thought and speech has become.