Hull and the battle for Brexit

Fraser Myers reports from a city torn between Labour and Leave. 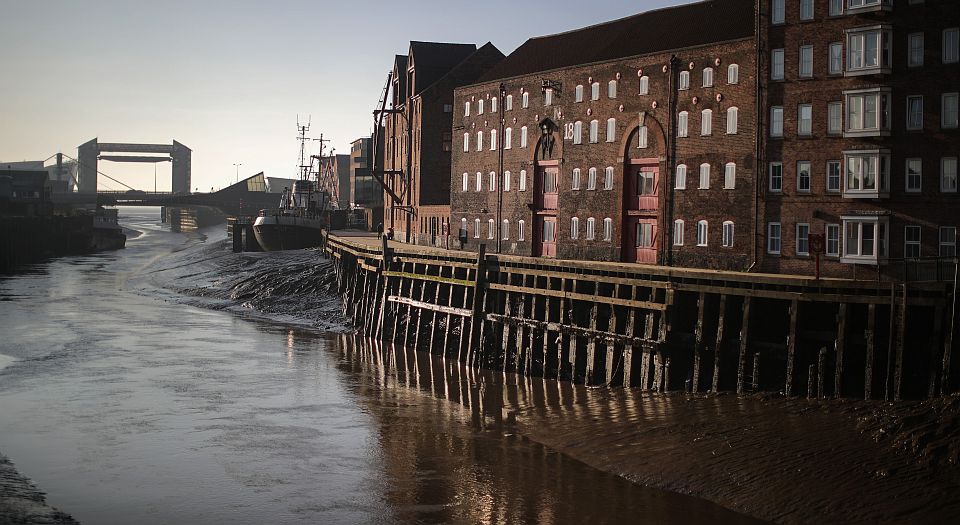 ‘Hull is a city of provocation’, suggests Alex, a theatre director, when trying to explain the huge vote for Brexit here last June. Hull’s three parliamentary seats have been Labour for 50 years, but during the EU referendum this tribal loyalty was tested. Two-thirds of the city’s voters defied the stark warnings of council leaders and Labour grandee Alan Johnson, leader of Labour In For Britain. As Johnson steps down as MP for Hull West and Hessle, I try to discover if Labour’s stranglehold on the city is loosening.

I arrive in Hull on a warm Saturday evening, halfway through the year-long celebration of Hull as UK City of Culture. I find myself at the after-party of a day-long street-theatre festival called Assemble Fest, organised by local theatremakers and supported by the City of Culture initiative. The venue was Larkin’s – recently renovated, a celebration of the poet who wrote scathingly of Hull when he first arrived, but who would eventually succumb to its charms.

I meet Anna, a local artist, who hopes the current cultural spotlight on Hull will put an end to the sneering. Hull has been the butt of jokes stretching back to the 17th century. As the Water Poet John Taylor’s ‘Beggar’s Litany’ goes: ‘From Hull, Hell and Halifax… may the good Lord deliver us.’ More recently, Vice addressed its dismissal directly at Hull’s citizens: ‘You’re just a glum port town falling apart at the seams.’

Did this derision from London and the south contribute to a Brexit vote? ‘Hull has been fucked constantly since World War Two’, says Alex. He mentions the National Picture Theatre, bombed by the Germans in 1941 and still derelict to this day. ‘The fishing industry was destroyed overnight in the 1970s, thanks to the Cod Wars’, says Jane, another artist. A combination of the then government’s gunboat diplomacy and need to compromise for wider strategic aims lost it the wars with Iceland over fishing rights in the North Atlantic, decimating thousands of skilled jobs in this area. Jane describes Brexit as ‘an instinctual fuck you to the man’.

Rupert Creed, the playwright who devised Made In Hull, the opening event for the City of Culture, tells me that immigration shaped this city and yet concern with immigration was behind the Brexit vote. He names Kosovans, Basque children fleeing the Spanish Civil War, Jews in the Second World War, and the Hugenots in the 17th century as examples of migrants and refugees Hull has previously welcomed. He notes a contradiction: that people here are personally very friendly — ‘anyone from Hull, as soon as they know someone they’re great’ — but politically they are isolationist. Brexit voters were ‘turkeys voting for Christmas’, he says. ‘Austerity has hammered this city. There’s a big public sector, so the cuts really bite’, he says — and yet, voters were ‘conned’ into scapegoating immigrants.

All of the cultural players I meet are Remain voters. Charlie tells me that those in the arts world seem ‘more accepting’. She says she felt distraught after the Brexit vote. Alice, ‘Hull born and bred’, felt ‘physically sick’ after the referendum. She was one of thousands to attend a Jeremy Corbyn rally in Hull to mark the launch of Labour’s cultural manifesto. ‘There’s a momentum of young people getting back into Labour’, she tells me. Others agree. Rachel has never voted before but will vote for Corbyn this week. Charlie says that while she doesn’t fully agree with Corbyn, she has ‘nothing in common with May’. Her friend wears a gold necklace emblazoned with the words: ‘Fuck The Tories.’

The Conservatives have been looking to capitalise on the Brexit vote in this election, to turn working-class Brexiteers blue. Christine Mackay, the Tory candidate for Hull West, tells me she’s been gaining support from working people and that the Tories have enjoyed their most positive campaign here for some time. For her, the defining issue of the election is Brexit: the public want ‘control of our laws, borders, and not to send huge sums of money to the EU’. ‘Many have said they will vote Conservative “just this once”’, she says.

I ask a pub barman if he thinks working-class voters will turn Tory. He laughs. ‘It’ll never happen.’ A junior doctor says Hull is ‘working class and it’s public sector… 100% Labour’. But I meet one voter who disagrees. Market trader Gary says he’s considering voting Tory because ‘we’ve got to stick to Brexit’. He feels it’s the major issue of the election and is dismayed that the Labour Party selected Emma Hardy — a Remainer — as the candidate to replace Alan Johnson. Hardy told BBC Humberside that the election was ‘not a rerun of Brexit, it’s not about last June — it’s about what is the future going to look like’. Gary says he can’t vote for her. As for the Tories, ‘Theresa May’s a strong woman’, he says, adding: ‘I hope.’ His partner Jo is slightly less certain. She says the election is only around ‘80 per cent about Brexit.’ She says voters shouldn’t lose sight of other issues, like education.

Dale tells me he has ‘no time’ for the Tories, but Labour’s unbroken dominance in the town has bred complacency, he reckons, both in parliament and in local government. The ‘East Hull Mafia’ — that’s how many view the Labour-run council, he says. Was it this complacency that led Labour to select a Remainer candidate for this heavily pro-Leave area? Not just a Remainer but a full-on ‘Remoaner… until the election was called’, says Dale: he cites her now deleted tweets urging her followers to join the post-referendum March for Europe in London. He voted to leave the EU: ‘We want rid of it.’

Dale is a keen volunteer for a campaign launched just five weeks ago when Michelle Dewberry, perhaps best known as a former winner of The Apprentice, threw her hat into the ring. She cut her teeth politically as a panellist on Sky News’ weekly debate show The Pledge and has appeared on Question Time. ‘I could sit there in a comfortable TV studio moaning about how things need to change, or I could do something about it’, she tells me. Dewberry is the first independent candidate to run in Hull since the 1960s, and Dale is excited at the prospect of her being the one to ‘get Labour out of Hull’ and ‘show people there’s an alternative’.

Michelle Dewberry on the campaign trail

Dewberry’s campaign HQ is based in a room of Ye Olde White Hart pub known as the ‘Plotting Parlour’. It was in this room in 1642 that the decision was taken by Sir John Hotham, then governor of Hull, to refuse Charles I entry to the town. This act of disobedience sparked the first siege of Hull: the first major action of the English Revolution. Today, a defeat for Labour locally and success for Brexit nationally would feel revolutionary. ‘It’s never been an ambition of mine to get into politics — I felt compelled to do this’, says Dewberry of the strange and exciting political moment we find ourselves in: ‘Things will only change if people take action, and Brexit is a huge opportunity for change.’

I go leafleting with the Dewberry campaign team and meet Mark outside Poundland. I ask him who he’s voting for. He hesitates, and then says: ‘Labour.’ He voted Brexit but is not sure Corbyn is up to the job of negotiating with the EU. He feels politically homeless but tribally Labour.

This is where Dewberry hopes to make inroads. ‘People who normally vote Labour want Brexit but not Corbyn; they trust May on Brexit but don’t want any of the other rubbish.’ As a proud Brexiteer, Dewberry’s key pledge is to uphold the Brexit vote. ‘I respect the democratic process, regardless of the subject’, she says. Leave voters like her took a ‘considered’ and ‘researched’ decision, she says, and ‘the outcome should be respected.’

The danger is that people’s dissatisfaction with the main Westminster parties will translate into not voting at all. There’s a mood of anti-politics in parts of Hull. ‘Politics is all bollocks’, says Scott, a labourer. Shane told me he won’t vote this time and doesn’t care who gets in. As a business owner, ‘I actually make a difference, politicians do fuck all’, he says.

Most people here are excited that Hull is the City of Culture. ‘Are we becoming posh?’, one resident joked. Hull’s winning bid for the City of Culture was based on the theme of this city ‘coming out of the shadows’. ‘For the people ignored by Westminster, the City of Culture is a reminder that they matter’, says Jane the artist. But for others I speak to, it is really Brexit that changed Hull’s fortunes, and the outlook of its residents, giving them a sense of control over their futures. I ask Dewberry if she is likewise optimistic for the future of Hull. ‘Definitely’, she says. ‘If I get in.’