Trump: a tyranny of the minority

Most Americans are opposed to the president’s authoritarian policies. 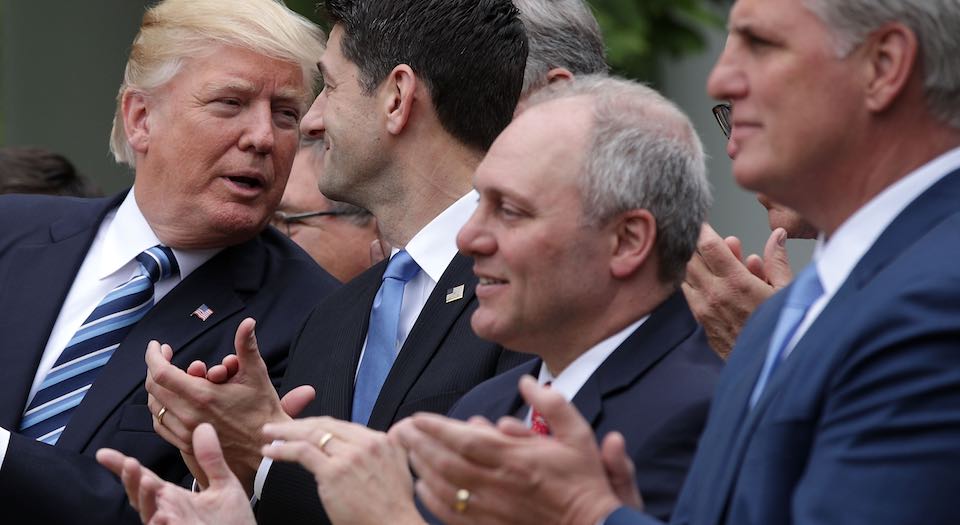 A majority of Americans (60 per cent) believe that neither corporations nor wealthy individuals pay ‘their fair share of taxes’, according to the Pew Research Centre. But Republicans are intent on dramatically lowering rates for corporations and the top one per cent anyway. Similar majorities oppose withdrawal from the Paris climate accord as well as substantial cuts to the Environmental Protection Agency’s budget. But, with the support of congressional Republicans, Trump has withdrawn from the Paris accord and plans to cut the EPA’s budget by about one third. Three-quarters of Americans support federal Medicaid funding for Planned Parenthood to cover non-abortion services, according to the latest Kaiser Family Foundation poll, but the Republican healthcare bill would cut Planned Parenthood’s Medicaid funds, unless it stops providing abortions (which Medicaid hasn’t funded for years). Only 12 per cent of Americans support cuts to Medicaid generally, but Trump’s budget and the Republican healthcare plan would cut into it deeply.

Minority rule: a president elected by a minority of voters promulgates policies opposed by a majority of Americans, with congressional support. It’s undemocratic and perfectly legal, thanks, in no small part, to the electoral college that sent Trump to the White House despite his three million popular-vote deficit, partisan redistricting (enabling politicians to choose their voters), and the disproportionate power enjoyed by small, rural states in the US Senate. The reliably Republican state of Wyoming, for example, population 586,000, enjoys the representation of two US senators, just like the reliably Democratic state of California, population 38.5million. Consequently, Republicans maintained their Senate majority in 2016, despite having received fewer overall Senate votes than Democrats. Republicans in the House of Representatives actually won a majority of overall House votes in 2016, for the first time in several years. In 2010, 2012 and 2014, they won control of the House with a minority of overall votes. But the size of their majority continues to be disproportionate: in 2016 they still won more seats than their share of votes nationwide.

The Republicans’ success in winning the White House and Congress with minorities of votes exacerbates a natural partisan tendency to cater almost exclusively to their base, as the healthcare debate demonstrates. The Republican healthcare bill recently passed by the House (the American Health Care Act) is opposed by a majority of Americans, but it’s supported by two-thirds of Republicans. The president and House Republicans calculated that the risks of passing a healthcare bill with minority support were outweighed by the risks of disappointing their base by not repealing the Affordable Care Act (Obamacare). You can discern a similar calculation in Trump’s withdrawal from the Paris accord. He was playing to his base – the minority of voters who support withdrawal and his brand of isolationist nationalism. Disappointing them may have been riskier politically than pleasing the majority, given that many supporters of the Paris accord might never support Trump anyway. When minorities can win control of government, the minority rules.

The built-in advantages enjoyed by Republicans are not excuses for Hillary Clinton’s loss, her unpopularity and multiple misdeeds or mistakes, or for the Democratic Party’s failure to win state races and gain control of either the House or Senate. But they are partial explanations and measures of the structural challenges still confronting opponents of the Trump administration and one-party minority rule. These challenges will only multiply; they’re effectively self-perpetuating. Controlling the White House and Congress, for example, will greatly expand conservative Republican control of the federal courts and enable promulgation of laws, like abortion bans, that lack majority support. Trump has approximately 130 judicial vacancies to fill, and the Republican Senate majority seems poised to relax longstanding rules allowing the minority party to put holds on the president’s nominees.

Controlling the courts, as well as the Justice Department, will increase Republican control of state voting systems. Like the rest of American society, courts are increasingly partisan, and Trump’s judges are unlikely to uphold federal challenges to allegedly unfair or unconstitutional statewide voting systems. The Trump Justice Department has already pulled out of voter-suppression cases.

It has also revived the disastrous war on drugs, which has contributed to mass disenfranchisement. Attorney general Jeff Sessions, an old-fashioned drug warrior, has rescinded Obama administration policies discouraging federal prosecutors from leveling charges against low-level, non-violent drug offenders that entail disproportionately harsh mandatory minimum sentences. Sessions is defying growing concerns, from right and left, about mass incarceration and a national trend toward decriminalising marijuana and treating addiction to hard drugs as a disease not a crime. But, armed with a vast, elastic federal criminal code and authority over federal prosecutors, he has the power to do so.

How does this affect voting rights? Some six million Americans convicted of felonies have lost the right to vote, according to the Sentencing Project. Felony disenfranchisement laws vary state to state, but about two thirds of the states deny voting rights to people in prison and on probation or parole; about one third of the states permanently disenfranchise people with prior felony convictions. These laws have disproportionate impacts on African-Americans who are disproportionately targeted by the drug war. The Sentencing Project estimates that ‘one in 13 African-Americans of voting age is disenfranchised’. Since African-Americans lean Democratic, this contributes to the Republicans’ structural advantages. It’s not surprising that Democrats tend to favour enfranchising people with prior felony convictions, while Republicans tend to oppose it.

How resilient is Republican minority rule? The 2018 elections will be its first significant test. Democrats are likely to lose additional seats in the Senate (they have 25 seats up while Republicans have only nine). They do, however, have a chance to take back the House. Structural advantages aren’t insurmountable, but in the end, it’s up to voters to surmount them. The US has shamefully low voter participation rates, especially in midterm elections when the presidency is not on the line, and, in recent years, Democrats have suffered lower voter turnout than Republicans. The Obama presidency helped motivate oppositional voters. Democrats can hope that the Trump presidency has a similar effect on his opponents. The majority of Americans who oppose Trump have the power to begin checking him, if they march in the direction of the polls.