Keep calm and carry on? No thanks

Brendan O'Neill makes the case for anger and action after terrorism. 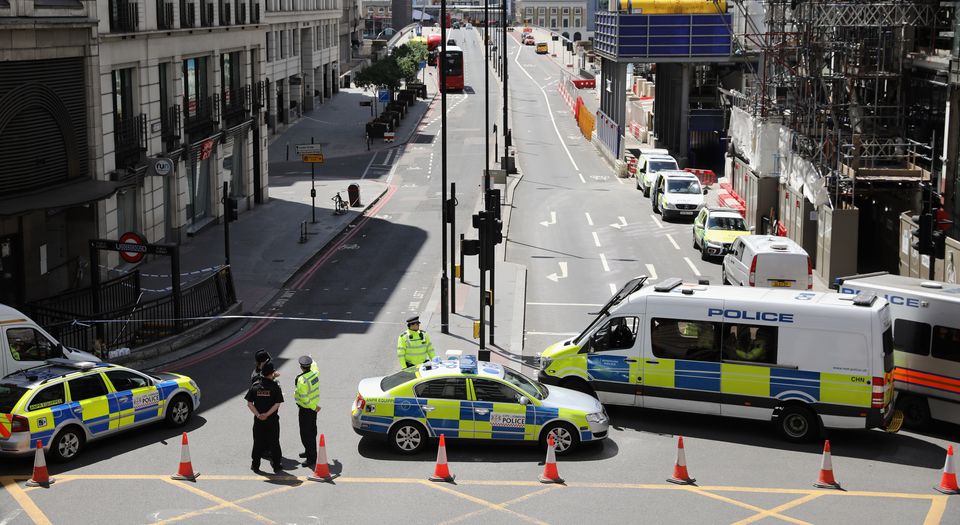 Everything’s back to normal. That’s what they say. Just 48 hours after a London Saturday night out was intruded upon by three knife-wielding men, which came just 10 days after 22 pop fans were bombed to death in Manchester, which came just two months after pedestrians on Westminster Bridge were mown down by a man who then ran into parliament waving a knife, British life has returned to its breezy pace, we’re told. We’re back in bars. Off to work. We’ve restaged that Ariana Grande gig. We’re cool. Life continues. It’s normal. But is it? More importantly: should it be? Should normalcy return so quickly after three acts of barbarism in three months against our fellow citizens? After the bloody destruction of children, the knifing to death of Saturday-night revellers? I’m not sure it should. The normalcy discomfits me. It feels wrong.

The ‘normal’ script is everywhere. Columnists congratulate us for carrying on. The Twitterati mocks the New York Times for suggesting Britain is ‘reeling’ from these attacks. Actually, ‘life is going on as usual’, the Telegraph tells the NYT. On one level, this ideal of normalcy, the return to the everyday, is admirable. It speaks to calmness in the populace. But it’s becoming clear that there’s passivity in it, too. That the top-down celebration of normalcy in particular is motored more by moral evasion, by a reluctance to grapple with the magnitude of what has happened, than by anything like the Blitz Spirit. And there is a serious danger here: that in celebrating normalcy after terrorism, we normalise terrorism. That in saying ‘We’re not phased’, we make atrocity acceptable. An acceptable part of life that we deal with – like train delays.

Not panicking, not giving in to emotion post-terrorism, is unquestionably a positive trait. It also shoots down the elitist fearmongering about an ‘Islamophobic backlash’ following Islamist mass murder: in truth, the public is civilised not hateful. But failing to think post-terrorism, to engage in as wide and difficult a debate as possible, is less admirable. And the celebration of normalcy – more than that, the active cultivation of normalcy by the political class – seems designed to do just that: repress strong feeling, and awkward questions, and that niggling sense that nothing is normal right now; that the massacre of 34 people in the space of three months for being suspected British citizens, for being one of us, is as far from normal as you can get. An interviewee in Newsweek brilliantly disturbed the normalcy script this week. For a feature headlined ‘After another terrorist attack, London keeps calm and carries on’, she was asked, ‘Life is going on as normal, isn’t it?’. ‘It’s not normal, I hate it’, she replied. I agree with her. And I suspect many others will, too. This isn’t normal, which means there’s a serious problem with the normalcy response.

The cultivation of normalcy is not about celebrating self-possession or stoicism. We know this because stoicism is the most demonised emotion in 21st-century Britain. It continually gets a bad rap. Just a few weeks ago, in the latest public campaign to raise awareness about mental illness, there was a Royal Family-led, media-cheered diminution of the ideal of moral endurance in the face of hardship. As media reports informed us, this ‘Ancient Greek version of “keep calm and carry on”’ has fallen out of favour, and we should ‘not live by [the value of] stoicism’. A society that encourages us to confess our weakness, to be open about the mental and moral turmoil allegedly caused by everything from exams to relationship breakdowns, is hardly going to trust us to ‘keep calm and carry on’ in response to three acts of mass murder. No, the cultivation of normalcy is a cultivation of silence, not stoicism. It’s about fostering intellectual passivity, not moral strength.

That the original, Greek version of ‘keep calm and carry on’ is so ridiculed today should make us wary of the cry to ‘keep calm and carry on’ following terror attacks. What it really means is: ‘Keep calm and don’t think. Keep calm and don’t ask that question lurking at the back of your mind.’ The invitation to normalcy is an invitation to negate our moral, social discomfort with what is happening right now. Evasion is the true aim here. Witness our political leaders’ reluctance even to say the word ‘Islamist’ during last week’s General Election debate on BBC One. Or the stern media warnings about our allegedly ‘Islamophobic’ feelings in the wake of terror attacks. Or those media talking heads reminding us idiots that we’re more likely to die on the roads or getting out of the bath than in terror attacks. The message is not so much keep calm as calm down. Calm down and say nothing. Calm down and do nothing. Calm down and feel nothing. ‘Be normal’, they say; what they mean is: ‘Be quiet.’

This moral evasiveness, this effort to treat terrorism as mere crime, or as akin to a natural disaster, where our job is to clean up afterwards and say ‘Well, it can’t be helped’, denudes terrorism of its ideological or murderous intent, and us of our responsibility as citizens to think and act in response to those who would massacre us, to those who hate us. It isn’t about celebrating our fortitude; it’s about decommissioning our moral and social feeling. And in the process it renders terrorism normal: something that the good citizen responds to by mourning for a day and then having a pint al fresco to show how unshaken he or she is. It’s apparently something over which we have no say or control; something we accept. And if we accept it, then it is by extension acceptable. The acceptability of atrocity: this is the message the terrorists will receive.

But none of this is normal. These three attacks were not road accidents or people stumbling as they got out of the bath or mistakes; they were conscious, violent assaults on us – you and me – and on who we are. They were acts of violence against our citizens and our society. This is a form of violence designed to chip away at our national resolve, our moral resolve, and our sense of ourselves as free citizens. Insidiously, this new violence erodes the traditional line between the homefront and the enemy that holds for most conflict situations, by bringing the bombers and shooters of our citizens and the foes of our values into society itself. They are among us; they are from us. There is a conflict inside our society, and like that Newsweek interviewee, I feel that this is not normal – and I hate it.

‘There’s nothing you can do’, people say. ‘You can’t stop a mad man’, they insist. This contributes to the cultivation of normalcy, which is really the cultivation of passivity. I think there is something we can do in response to ideological or murderous attacks on our citizens and our society. Morally, we can refuse to be cowed. Intellectually, we can defend our values against theirs, and insist, against the cult of relativism, that our liberal, democratic ideals are superior to their theocratic or hateful ones. Civically, we can create a more self-confident, pro-democratic public life, where people might feel emboldened to argue down backward Islamists and to make the case for Enlightenment ideals. And physically – yes, physically – we can commit ourselves to protecting our public, social and decadent spaces from those who come with arms to attack us. Let us now seriously consider setting up citizens’ defence committees, and training the young in particular to man them, so that any enemy of the people who comes to commit murder in them will be dealt with swiftly and forcefully.