Cancel Sarsour: the hilarious hypocrisy of the alt-right

The alt-right is as shrill and illiberal as the SJWs it hates. 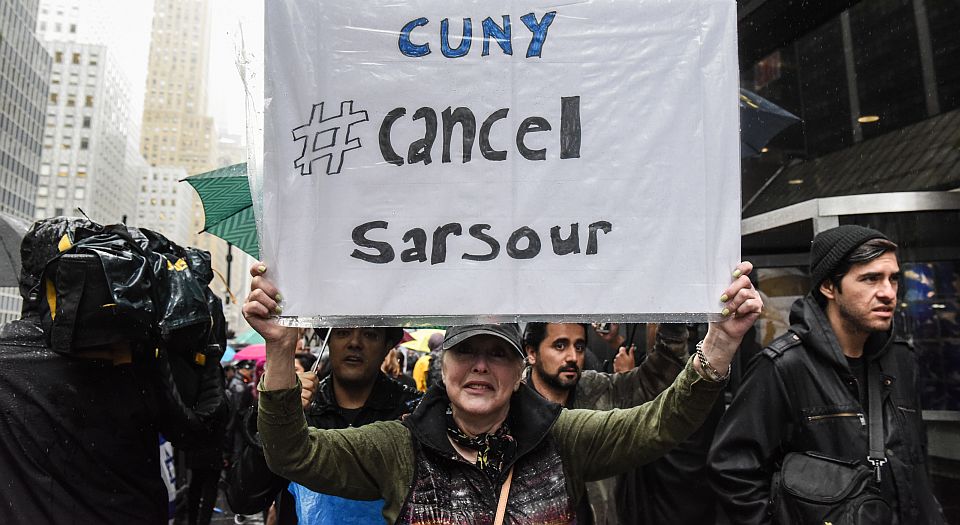 Last week, a gaggle of liberty-allergic campus crazies braved the New York rain to demand yet again that someone they don’t like be censored. They gathered outside CUNY, the City University of New York, the institution that has alarmingly offered a platform to someone they don’t like, and hollered for the speaker to be pulled. ‘Shame on CUNY!’, they chanted. If students hear this evil person’s words, they’ll become ‘zombies’, one speaker said. The protest ended in scuffles, as the warriors for censorship clashed with students who are pro-free speech. You know you’ve crossed the line from liberty to tyranny when you’re using violence to silence people you disagree with.

But here’s the thing: this rain-sodden demo for censorship wasn’t the handiwork of blue-haired, easily triggered ‘SJWs’, those Gender Studies types who get tonnes of media stick, deservedly, for their fear of certain ideas. No, this was an alt-right gathering. Yes, those faux-edgy agitators against PC, who rage against ‘snowflakes’, were doing the very thing they claim to hate. They were rashly shouting for the silencing of an allegedly offensive speaker. And we should be glad they did this, because it confirms beyond doubt that for all their shrill Twitter-bitching, the alt-right and SJWs are cut from the same political cloth.

The demo was organised by the American Freedom Defense Initiative, an Islam-obsessed pretend think-tank run by human foghorn Pamela Geller, who makes Katie Hopkins look like Mother Teresa. It was demanding the disinvitation of Linda Sarsour, an Islamist feminist (LOL) and organiser of the Women’s March against Trump, that demo at which hijab wearers mingled with vagina-hat-wearers to weep for Hillary because… well, because the left is dead and has been replaced with this bullshit. CUNY’s School of Public Health has asked Sarsour to give the commencement speech this week. Cue fuming from the anti-Sarsour set. If this stinging critic of Israel and fan of Islam speaks at CUNY, students’ minds will be infected with the ‘toxic ooze’ of hate, Geller told the crowd, using the very same paternalistic arguments that ostensibly leftist authoritarians use to justify the Safe Spacing of universities against right-wingers.

Loads of alt-right people were there. Gavin McInnes, founder of Vice turned hard-right hack in a vest – Gavin: gym first, then vest – was skulking around. Even Milo Yiannopoulos, chief riler of the Safe Space generation, was there, though to his credit he insisted Sarsour should be allowed to speak. As the Village Voice said, this demand was ‘diametrically opposed to the organising rationale of the rally’, which was basically that free speech is all well and good but it doesn’t include the kind of ‘hate speech’ Sarsour allegedly peddles.

Even Breitbart, self-styled tough-guy mag for MAGA types, bigged up Geller’s quarrelsome mob for censorship. It gave her space to say ‘this is not about free speech’, because Sarsour is a ‘vicious anti-Semite’. This is word-for-word the same cry made by moaning millennials who demand the disinvitation of speakers sceptical about feminism or critical of Islam or in some other way deficient in PC. ‘This isn’t about free speech’, they say, ‘because those speakers deal in hate speech’. Guys, free speech includes hate speech. The clue is in the title. It’s called free speech, and hate speech, as its name suggests, is speech. Get a dictionary. How Breitbart will ever again get away with sneering at what it calls ‘snowflakes’ remains to be seen: in its implicit backing of ‘Cancel Sarsour’, it has shown it’s as ‘snowflakey’ as any 19-year-old who bawls into his colouring book whenever Christina Hoff Sommers shows up.

The CUNY protest is important because it reveals the alt-right (a not very useful name for Trump-leaning web warriors) is really similar to SJWs (or Social Justice Warriors, a not very useful name for a campus left that has abandoned left-wing values like autonomy and progress and now spends its whole time berating White People, trying to force student canteens to stop selling sushi, and shouting ‘Rape!’ at men who didn’t get their date to sign a release form before sex). The shouting match between these two decadent outfits that has occupied so much media airtime of late is the narcissism of small differences, its very shrillness proof of the insubstantial nature of the disagreement.

Like SJWs, the caustic right considers itself under siege. Only where SJWs indulge borderline conspiracy theories about The Patriarchy or ‘white supremacy’ still controlling our world and warping our minds, the alt-right thinks marauding pinkos and sharp-elbowed feminists have colonised the academic, political and moral universes. Like SJWs, the alt-right has embraced the politics of victimhood and in fact is a fine purveyor of self-pity. Its members have a tendency to blame every crap thing in their lives on some nasty, usually left-wing force beyond their control. And like SJWs, the alt-right is allergic to freedom. It wants Sarsour silenced, BDS initiatives banned, Black Lives Matter registered as a ‘terrorist group’. Anti-PC? Do me a favour. They’re PC to their core.

The alt-right and SJWs need each other. They’re symbiotic. The Sarsour spat illustrates this perfectly. The likes of Sarsour – dull Islamist fashionista with nothing of substance to say – needs hollering right-wingers outside her events to fortify her self-regarding sense of victimhood and make her feel like a public enemy when really she’s totally establishment. And alt-righters needs Sarsour and intolerant feminists and students weeping over pro-Trump messages written on campus sidewalks in chalk, because this convinces them of their conspiratorial pinko-fearing worldview and adds spice to their otherwise dull political lives. Sensible people on both the right and left should leave these muppets to it, and move on to quieter debates about far more substantial things.