The EU is no workers’ haven

Syriza has once again capitulated to brutal EU austerity. 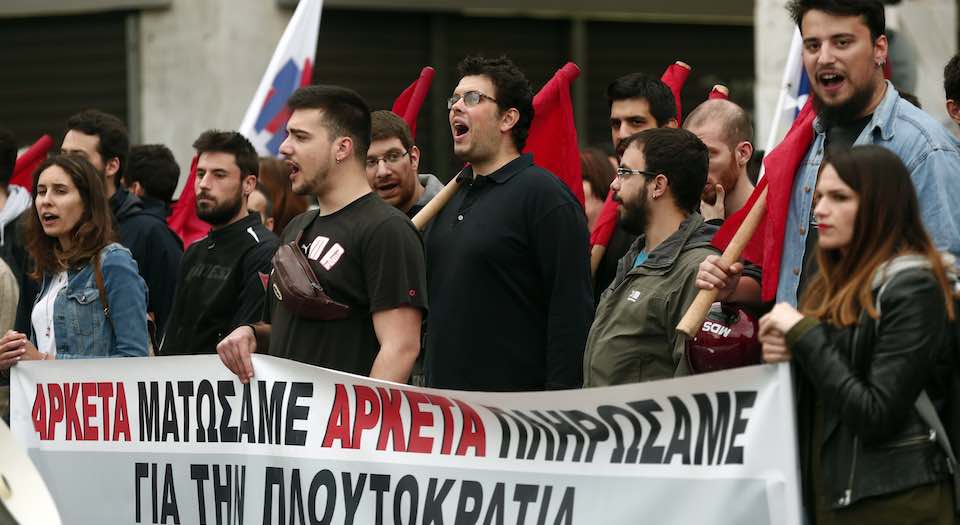 Stations were empty, streets were gridlocked and 150 flights were cancelled as workers in Athens downed tools for a General Strike last Wednesday. Ferries were left tied up in port as part of a four-day seamen strike, intercity trains weren’t running and public hospitals had only emergency staff on-site. Images of a European city grinding to a halt appeared as thousands marched in Athens to oppose the latest round of austerity measures.

More strikes followed on Thursday, called by major unions. Though the demonstrations were mostly peaceful, small breakout groups threw projectiles and clashed with police. But the protests couldn’t prevent the inevitable. A new bill passed through the Greek parliament on Thursday, pledging cutbacks aimed at saving around €4.9 billion up to the year 2021. It passed with a small majority, supported by the ruling Syriza party and its coalition partner, the right-wing Independent Greeks. Greece needs to pay €7 billion to its creditors in July this year, and must implement further measures to release more debt relief from the European Union and the International Monetary Fund (IMF).

The new measures will mean further cuts to Greek pensions and a rise in income tax. Kyriakos Mitsotakis, head of the conservative main opposition party, was highly critical. He told parliament: ‘Our country is being turned into an austerity colony… [The government] was seeking to get [bailout] funds without [austerity] measures, and instead got measures without the funds.’ He may be right – talks at the European Council on Monday did not reach any final agreement on a deal.

This will be the 13th pensions cut for the Greeks since 2010. In February, during the last round of talks between Greece and the EU, Effie Achtsioglou, minister of labour, social security and social solidarity, wrote a letter in the Financial Times, in which he said: ‘Greek pensioners barely have enough to live on… Per-capita income for individuals aged over 65 is about €9,000, compared with €20,000 in the Eurozone.’

According to a Reuters report from the same month, food banks in Greece no longer know if they can meet the needs of numbers. One food bank in Athens is now serving 11,000 families – increased from 2,500 in 2012 and 6,000 in 2014. Of those living in poverty in Greece, around 1.2million are pensioners. The situation is no better for the working-age population: unemployment is almost at one in four and youth unemployment is now at 48 per cent.

Unsurprisingly, Syriza is doing very badly in the polls. The governing party was elected in 2015 promising to stand up to the EU and reject the harsh austerity measures. But since being in power it has bent over backwards to carry out the EU’s bidding. For ordinary Greeks, the Syriza-EU agreements have been one blow after another. The ever-increasing cuts and resultant reductions to pensions and higher taxes have resulted in a stream of astonishing protests. Heartbreaking images of an elderly man weeping by a cash machine and disgusting footage of protesting pensioners being teargassed by police have gone around the world.

The EU’s demand for stricter and stricter austerity measures and Syriza’s refusal to stand up to it is pushing the lives of ordinary Greeks to breaking point. And yet, irony of ironies, in the UK some politicians are still convinced that it is the EU that guarantees workers’ rights – and that this is what we stand to lose post-Brexit. The Liberal Democrats say they will uphold EU workers’ rights in their anti-Brexit manifesto, while Labour’s manifesto reads: ‘The EU has had a huge impact in securing workplace protections and environmental safeguards… A Labour approach to Brexit will ensure there can be no rolling back of key rights and protections and that the UK does not lag behind Europe in workplace protections and environmental standards in future.’

Those quick to sing the praises of the EU should look to the more than 15,000 workers who came out on to the streets of Athens last week. Some held banners reading ‘No to austerity, yes to debt relief!’ and ‘Bring back the conquered rights that you stole from us!’. Protesters chanted: ‘They talk about losses and gains and we talk about human lives.’ These are European workers, and yet it is unclear what special rights and protections they are enjoying thanks to their EU citizenship.

With no definite agreement reached in Brussels, the Greek saga will continue, meaning further hardships for the Greek people. Surely any politicians who claim to defend workers’ rights should be standing in solidarity with the Greek people, not backing the unaccountable institution that has forced them out on to the streets time and time again.