Both Labour and the Conservatives want to turn schools into wellness retreats. 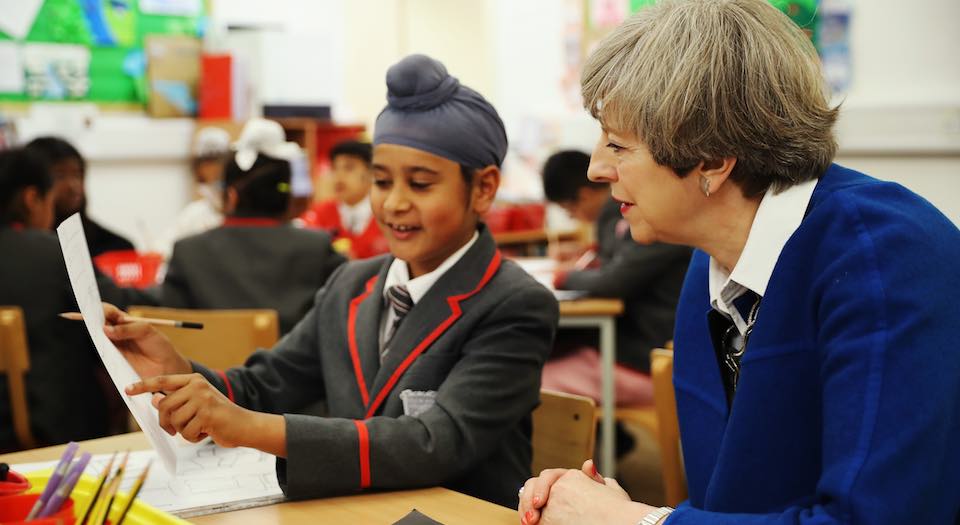 ‘Strong and stable leadership.’ ‘For the many, not the few.’ These slogans, repeated ad nauseam by Theresa May and Jeremy Corbyn and reproduced on posters and leaflets, have come to dominate the pre-election debate. Their incantation acts as a shield, protecting the speaker from further questioning and closing down discussion. Politics becomes reduced to seven syllables.

Recourse to soundbites in this election campaign is disappointing. Last summer’s referendum ignited an interest in political debate that had long lain fallow. As a result, 72.2 per cent of those registered voted in the referendum – up from 66.1 per cent in the previous General Election and a pitiful 59.4 per cent in 2001. On buses, in pubs and cafes there was an appetite for discussing Brexit and the implications of triggering Article 50. Now politics is in danger of being drowned out by sloganeering once more.

Some blame Tony Blair (always a convenient scapegoat), others the Tory election strategist Sir Lynton Crosby, for the dominance of the slogan. Crosby, a fan of neuroscience, argues ‘message matters most’ and that the art of persuasion ‘is creating, solidifying and activating networks that create primarily positive feelings toward your candidate or party’. But the real issue is why politicians are so readily convinced by the likes of Crosby and the American linguist George Lakoff, who similarly argues that winning political arguments is all down to how debates are framed.

Politicians are all too ready to accept advice about endlessly repeating the same slogan because they don’t think voters are capable of understanding complex arguments. This view of people as generally a bit stupid is there in arguments that the media, an image on the side of a bus, and Russian attempts to influence social media, all helped sway the Brexit decision. It’s also evident in both Labour and Conservative proposals for education that seem premised on the belief that children are not actually able to learn.

When children are considered to be incapable of learning, the goal of education becomes welfare. Teaching becomes less concerned with the transmission of subject knowledge and instead shifts focus to children’s wellbeing. The project of schooling switches from intellectual to emotional concerns. This confusion of education with social work, the blurring of the role of the teacher and the role of the parent, this replacement of learning with formal care policies (which are, in practice, often anything but caring), underpins all parties’ education proposals.

Labour’s lengthy manifesto devotes 10 whole pages to education under the heading ‘Towards a National Education Service’. The National Education Service (NES) is a deliberate rhetorical echo of the NHS. But the parallels are not just linguistic. Labour intends the NES to provide ‘cradle-to-grave learning that is free at the point of use’. We’re told: ‘The NES will be built on the principle that “Every Child – and Adult – Matters” and will incorporate all forms of education, from early years through to adult education.’

Lifelong learning sounds a noble enough idea – but there’s little sense here of what people will learn, and when, if ever, they will move from being learners to knowers. We’re told the NES would be about providing skills and ‘giving people confidence and hope’. The idea of being given ‘cradle-to-grave’ confidence and hope sounds less like education and more like coerced participation in a wellness retreat. Education – through teaching knowledge – should lead to people being critical, intellectually independent and morally autonomous. The NES proposes to be the very opposite of this – creating lifelong dependents who never get to grow up and leave the classroom, always kowtowing to the teacher who knows best.

The paternalistic thinking behind Labour’s NES confuses education with care, to the detriment of both. The ‘cradle’ part of the NES would mean more free childcare places with better qualified staff – a great idea. But it’s justified on the basis that time in a formal educational setting in the early years can boost a child’s later GCSE results. Rather than giving young children the attention they desire, and the freedom they need to grow up at their own pace, the NES would always have one eye on their future exam success. Likewise, giving all primary school children a free school meal makes for a sociable shared lunchtime experience for teachers and pupils. But when it’s done to aid attainment (despite the fact there is no evidence to suggest free meals do lead to exam success) it can appear to be more about schools stepping in to take over the role of the parent.

By contrast, smaller class sizes and free university places are presented by Labour as less about academic attainment and more a matter of social justice. Scrapping tuition fees will no doubt win the backing of Labour’s core demographic – students. But when university becomes separated from intellectual challenge and the pursuit of knowledge, free education takes on a different meaning. Students would be getting a very different education to that of previous generations.

The Conservatives’ headline education policies have been widely publicised. The expansion of the duties of the teacher to encompass the role of the parent – and the transformation of education into welfare – is again all too apparent. Theresa May has proposed every school should have staff trained in ‘mental health first aid’, and that children should receive lessons in mental health, keeping safe online and cyber-bullying. As children are taught to see the routine experiences and emotional ups and downs of growing up as diagnosable conditions, the number of children reported to be suffering from mental health problems is likely to increase further.

The Conservatives talk of using school time for mental-health workshops, while at the same time wanting to reintroduce grammar schools and high-stakes selection tests to separate off the most academically able from the majority of children. May’s grammar schools would not mark a return to a classical liberal curriculum – they’re designed for one purpose only: to promote social mobility. Proposed new grammar schools would be less about academic rigour and more about getting working-class kids into good jobs.

It seems that neither of the main political parties can see a role for education that goes beyond social welfare. Schools are presented as being about looking after children’s mental health or getting people into work, and little else. What most parents want, it seems to me, is quite straightforward – a good local school where children come home each day knowing more than they did when they left that morning. Yet neither Labour nor the Conservatives are offering this.