Comey’s firing: a disaster for democracy

Trump's intolerance of checks on presidential power is getting scary. 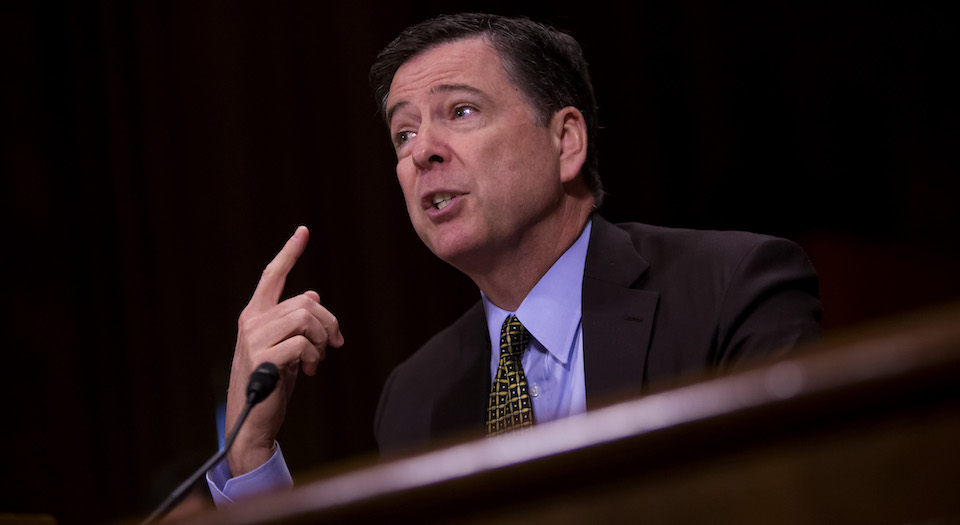 Demonstrating either ignorance of the law or contempt for it, if not both, Donald Trump has now boasted on national TV that he fired FBI director James Comey because he was leading an investigation into possible collusion between the Trump campaign and Russia. ‘I said, you know, this Russia thing with Trump and Russia is a made-up story, it’s an excuse by the Democrats for having lost an election that they should have won.’ In acknowledging that he fired Comey because of ‘this Russia thing’ targeting his campaign, Trump has arguably confessed to obstructing justice, as legal commentators have observed. He’s inarguably admitted that the initial explanations he and his minions offered for Comey’s dismissal to Congress, the press, and the public were false.

First the president, vice president and several high-ranking administration officials claimed that Comey was fired on recommendations from the attorney general and deputy attorney general because he had wrongly released ‘derogatory information’ about Hillary Clinton, after declining to prosecute her email lapses, and for publicising the re-opening of the email investigation shortly before the election, in violation of department policy. It’s doubtful that anyone sentient actually believed that Trump fired Comey for being mean to Clinton (he had previously praised Comey for criticising her), but Congressional Republicans generally seemed content to pretend they believed it. That was easier than pretending there’s nothing wrong with the president firing an FBI director who has him under investigation, though, at least in public, most seem up to the task.

Maybe Trump sincerely believes that the ‘Trump and Russia story’ is fake news. Maybe that would absolve him of intending to obstruct justice. It still wouldn’t justify the summary firing of an FBI director investigating his campaign and, for all we know, his business. (Trump is a kleptocrat: there has never been a clear line between his business interests and his campaign or administration.) Indeed, if Trump believes his campaign was innocent of colluding with the Russians he’d be better off letting the investigation run its course, asserting confidence in its inevitable outcome. He’d be better off not denying what the intelligence community and leading Republicans and Democrats alike have acknowledged — that Russia (and not some 400-pound kid living in Jersey) was responsible for the email hacks that handicapped the Democratic party and the Clinton campaign.

This is not to assume that Trump’s interference in the investigation suggests he has something to hide. That might be a reasonable inference if he were a relatively mature person with a healthy ego, prone to acting rationally. But given his paper-thin skin, inability to tolerate criticism, preoccupation with his substantial popular vote loss, and extreme sensitivity to questions about his legitimacy and fitness for office, it’s just as reasonable to assume that Trump fired Comey in a fit of pique, because he felt disrespected or even overshadowed by him. The former FBI director was a ‘showboat’, Trump charged.

But while Trump’s petulance and insecurities are plausible, relatively innocent explanations for Comey’s firing, they’re not particularly comforting ones. A president with the emotional maturity, fragile ego and impulse control of a child is just as scary as a president covering up collusion with a foreign power.

Trump’s immaturity and utter ignorance of policy and governance are obvious. We don’t need an investigation of his character or competence. But his finances are opaque; and while the existence of multiple Russian connections between Trump and his close associates is clear, the nature of those connections is not. Moreover, several former and current high-ranking officials close to Trump, like Attorney General Jeff Sessions and son-in law and senior adviser Jared Kushner, have either lied about or mistakenly concealed inconvenient connections to Russian officials.

Trump himself is developing a habit of firing Justice Department officials investigating his associates or his campaign. First he summarily fired US attorney for the Southern District Preet Bharara, not long after inviting him to stay on. Bharara, an aggressive prosecutor, had federal jurisdiction over the New York-based Trump Organisation; his office was investigating Trump’s de facto media arm, Fox News, as well as stock trades by secretary of health and human services Tom Price. Trump fired former acting attorney general Sally Yates shortly after she warned the White House that national security adviser Michael Flynn (who’d lied about his Russian contacts) was a security risk, subject to blackmail by the Russians because of his repeated lying. Flynn was only fired after news of Yates’ warnings went public weeks later. Trump might have fired Yates anyway over her principled refusal to defend his first, unconstitutional Muslim travel ban (subsequently struck down in federal court), but that refusal was also a convenient excuse. Like Comey, Yates was involved in the Russia investigation.

You don’t have to regard these firings as evidence or suggestions of guilt in order to be troubled by them. They reflect Trump’s intolerance for normal institutional checks on presidential power. Either he doesn’t understand our system of checks and balances, or he doesn’t believe he should be subject to them. In addition to firing prosecutors he deems unfriendly, Trump has also decried the authority of judges to question the legality of his actions (although that is, after all, their job).

Trump was elected partly because voters admired his business experience and presumed acumen, but if some management skills are transferable, businesses are not democracies, especially family-owned businesses like the Trump Organisation. This is what running the government like a Trump family business means – little or virtually no accountability for the people in charge. The boss can demand near absolute loyalty and fire people who question his judgment or conduct and fail to fall in line. ‘I alone can fix it’, Trump assured us last summer. ‘I alone will be in charge. I will be untouchable’, he might as well have added.

Indeed, just like the head of a family but unlike a president, shortly after assuming office, Trump reportedly asked former FBI director Comey to pledge his personal ‘loyalty’. Comey, who was supposed to be loyal to the law and independent of the president, reportedly declined, which may have ensured his eventual firing. Not surprisingly Trump has denied this report, claiming instead that he’d asked if he was under investigation by the FBI, perhaps not realising how utterly improper that question would have been. He also claims implausibly that Comey assured him no fewer than three times that he was not being investigated. When contradicted, Trump thuggishly warned Comey that their conversation might have been secretly taped, in case he had not inspired enough comparisons to Richard Nixon and Watergate by firing the man investigating him. It seems unlikely that Comey was cowed by the mention of tapes; instead, he may be hoping to be thrown into that particular briar patch.

Will any of this matter politically? Democrats are naturally angered and deeply worried by Comey’s firing and its implications for the FBI’s investigations. Republicans are naturally accusing them of hypocrisy, since many were enraged by Comey’s handling of the Clinton email investigations. But they did not want him fired, mainly because they did not want the president choosing the man charged with leading the investigation of his campaign, his associates, and possibly his own behaviour. But assume at least for the sake of argument that the Democratic defense of Comey is hypocritical. So what? Democrats have virtually no power; they’re the peanut gallery. The US is in the grip of one-party rule. What matters is whether the president is abusing his power, not whether Democrats are disgruntled about losing the election or hypocritical in complaining about it.

Democrats can only fulminate about Trump’s allegedly impeachable offences. Republicans alone have the power to check them. Will they do so? That depends entirely on how they evaluate their own electoral interests. Will they consider their re-election prospects endangered or enhanced by openly or passively supporting Comey’s firing, by advancing or retarding investigations of Trump’s campaign or business? If Republican leaders don’t see political benefits in opposing the president, we will not see an independent investigation into any suspected illegalities or ethical breaches by him and members of his campaign or administration – unless Democrats eke out a House majority in 2018.

So far, Congressional Republicans are ‘closing ranks’ behind the president, the Washington Post reports. Trump has remained popular with his base, and Republicans who rely on many of the same voters have protected him from looming investigations. They have focused on incidental questions about press coverage of incidental surveillance in order to divert attention from allegations of his campaign’s collusion with the Russians, from Trump’s incoherent, utterly unsubstantiated claim that he had been ‘tapped’, and from former national security adviser Michael Flynn’s potentially criminal behaviour. They seem untroubled by Trump’s expressed admiration for murderous autocrats like Putin and Kim Jong-un. They have studiously ignored the innumerable, unprecedented conflicts of interest posed by the global businesses of Trump’s family and organisation. They have not pressed for release of his tax returns, to shed light on his financial interests in federal policies, including, most notably, tax reform.

Some conservative intellectuals continue to oppose Trump, stressing his unfitness, and the optimistic among us counsel faith in our institutions. But institutions have only as much independence and integrity as the people who run them. House and Senate Republicans have consistently enabled this dangerously erratic, ignorant, instinctively authoritarian president, despite serious concerns about his fitness. They hope to use him to advance their agenda of tax cuts, de-regulation, reproductive control, and repeal of Obamacare. It would be foolish to expect them to ensure the appointment of a truly independent FBI director or substantially check Trump’s efforts to accrue unchecked power, unless they begin to think their own partisan electoral interests are at stake. What’s at stake for the rest of us? Only the short- and maybe longer-term future of our already flawed democracy.