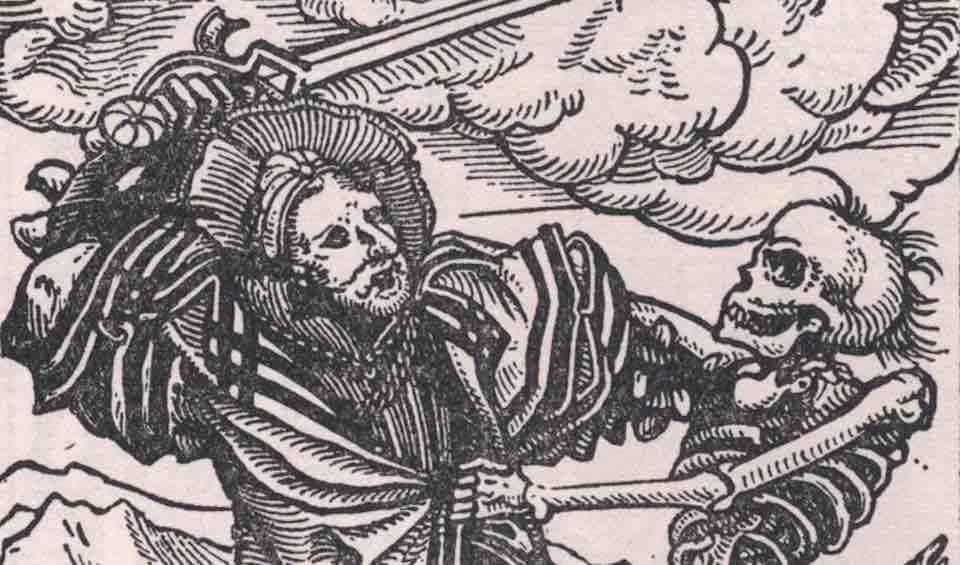 A new edition of Hans Holbein’s Dance of Death, brings his textured micro-universes to life.

If age is synonymous with canonicity – an assumption increasingly questioned – Hans Holbein’s 1523-5 Dance of Death qualifies as ‘classic’ on that score alone. But his striking work is also defining in deeper ways, epitomising the Reformation, when humanism, mercantilism, and artistic and scientific advances clashed and combined with classicism and Catholicism to launch the modern world. This is the first time the Penguin Classics descriptor has been applied to illustrations, but it is an admirable fit, and to concrete its status the Dance has been complemented by Holbein’s Alphabet of Death, and contextualised learnedly by cultural historian Ulinka Rublack.

Holbein is famed for his portraits of Henry VIII, Thomas More, and others – especially The Ambassadors in London’s National Gallery, his 1533 dual portrait of French diplomatists, Renaissance Men surrounded by the accoutrements of accomplishment as well as discord, between whom across a mosaic floor lies a monstrous anamorphic skull. The Dance of Death is less obviously appealing, being made up of 41 grayscale woodcuts, each just 65 millimetres high by 48 millimetres wide, but like the portraits it amply repays attention. This edition has magnified the images four-fold to make it easier for us to appreciate the artist’s highly textured micro-universes, with their hyper-realistic settings and moral messaging.

Religious and political conventions were under heavy bombardment in proud cities like Reformation-ready Basle, where Holbein created his Dance, but innovators were also inheritors. Holbein was wonderfully fresh, but the concept stemmed from a 1280 poem, Le Dit des trois morts et les trois vifs, by Baudoin de Condé. Condé’s concept of a homiletic interchange between feckless living and ghastly dead transmuted swiftly into other languages and pictorial art across Europe. The word ‘macabre’ was in use in France by 1376, and prelates or monarchs were often commemorated by Transi tombs, double-decker compositions representing them in both worldly splendour and mouldering actuality; an English example is Bishop Fleming’s (died 1431) in Lincoln Cathedral. In the 15th century, the Dance was sometimes performed as a masque, Dominicans and Franciscans guised as skeletons capering grotesquely with others representing all grades of society – Terpsichore treading manic measures with Thanatos. Catacombs and ossuaries became sites of prurient pilgrimage from Paris to Bohemia and England (Hythe in Kent, Rothwell in Northamptonshire).

Catholics had always been told they should prepare themselves for orderly dissolution – property disposed of, wills made, family farewelled, masses ordered – in preparation for translation to Heaven, but death would always have been surrounded by fascinated fear. The comfort intended to be drawn from Dances or viewing the disjecta membra of saints through rock-crystal windows was often a pious platitude. The clownish cavortings of cadavers across chancel arches or convent walls were gallows humour, a natural response to the stark facts that child mortality in the 1520s was around 30 per cent for the under fives, and adult life expectancy in the forties (Holbein died at 45). The Swiss, furthermore, were both importers of neighbours’ conflicts and exporters of mercenaries, and so grimly familiar with war. In Holbein’s accessible format, an old message gained new immediacy – ‘Death was no longer up on the wall, removed from everyday life, but came home in many of these scenes….looked at closely by well-off people seated in comfortable wide, cushioned, beautifully carved chairs.’ Edification was now also at-seat, outré entertainment.

The idea of death as universal equaliser is a cliché, but in the hands of Holbein it was carried off with exuberant originality. The skulls beneath his subjects’ skins are always grinning, mocking their dignities, plans and pretensions, and lacerating their shortcomings. The fur-collared senator engaged in politic conversations has noticed neither the pawing beggar, nor prone Death holding up an hourglass, because a demon blows a bellows into his ear. The advocate accepting a fee has temporarily forgotten that he, too, is subject to punitive law, which leers into his face and seems to drape a companionable ulna around his shoulders. The terrified duchess sits up in her four-poster bed (a foreshadowing of the likely design of her tomb) to see skeletons cackling and fiddling, playing a tune even she must dance to. Even those to whom Death ought to be neither stranger nor terror are taken unawares – the pope having his foot kissed, the cardinal surrounded by sybaritic vines, the bishop yanked away as his flock scatters in flight. Skeletons scramble riggings to claim the seaman, pound dulcimers to beguile the clearly unmusical old man, relieve the pedlar of his vast backpack (although he does not look grateful), drive the struggling ploughman’s skinny horses out of furrow, and stalk out of a hovel clutching a yelling child while his family gapes aghast. Holbein’s Dance simultaneously bolstered Christianity and satirised many of its exponents, and inculcated virtue while impaling the social order as neatly as one of his ossiferous japesters pierces ‘the Knight’ through vain armour.

While never revolutionary, the Dance would have had a semi-democratising effect, Rublack notes: ‘None of the elites is shown conducting the business of government in a responsible way.’ For these elites, being largely Catholic (and aristocratic), this kind of art was conformable with the Reforming, mercantile climate in early 1520s Basle. But in 1526 the woodcutter who executed the illustrations died, and ten further pictures never materialised. Holbein was compelled to seek work in Antwerp and England, although he returned to Basle to retain citizenship, where he designed the title page of the April 1529 ordinance that introduced the Reformation officially. (Two months previously, enthusiasts had instigated a purgative, cantonal ‘cleansing’ of religious artworks, ironically including some of Holbein’s.) He seems to have found the city increasingly uncongenial, and in 1532 returned to England, where he died in 1543 (his burial place, appropriately, is unknown). His Dance was republished in 1538, but it was only after his death that it really became celebrated, with innumerable editions in many languages.

Dances would be published across Europe into the 19th century (in England, William Combe’s wry 1814 text was brought brilliantly to life by Rowlandson), but post-Darwin, it became harder to see death as part of a plan, or release to some (always nebulous) higher state. The Victorians had a neo-Gothic streak, but they also swept away the past with brusque energy. As Europeans lived longer and saw through old enigmas, death became less familiar, and more frightening. This process appears to be ongoing, judging from our obsession with healthcare and security, and growing interest in fields like cryogenics, genetic engineering and life extension. We seem, if anything, less able to face intractability with equanimity than were 16th-century Helvetians. Hopefully this welcome addition to Holbein historiography will make some of us better people, or at least let us see ourselves in civilisational context – and this, after all, is the defining purpose of classics.

Derek Turner is the author of the novels A Modern Journey and, most recently, Displacement.

The Dance of Death, by Hans Holbein, is published by Penguin Classics. (Buy this book from Amazon(UK).)