The death of Leo Baxendale brings to an end a unique comic career. 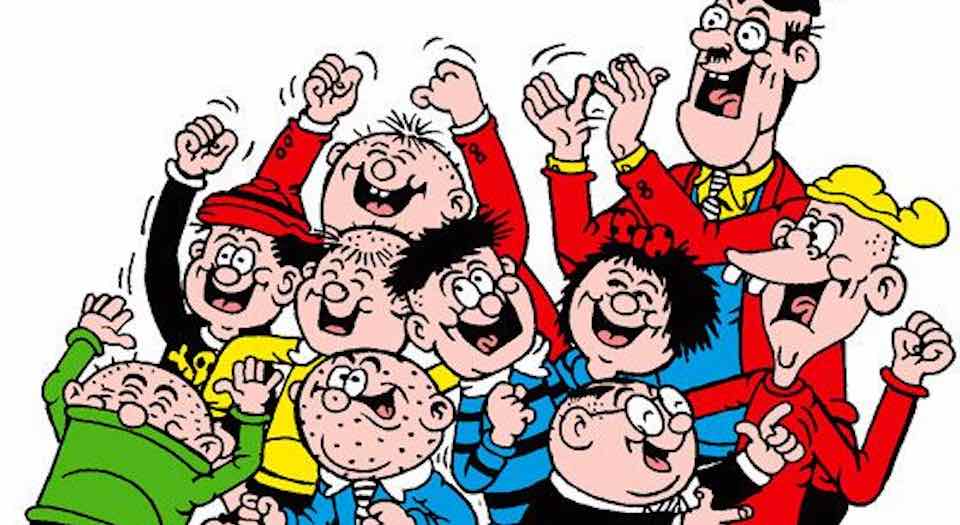 The cartoonist Leo Baxendale – creator of the Bash St Kids, Little Plum and Minnie the Minx – died this week. His was an extraordinary life of invention, irreverence to authority, and standing up to big business.

Baxendale had just finished his national service when he thought to try his hand at comic books, inspired in part by David Law’s Dennis the Menace strips in the Beano. He loved Dennis’s anarchic spirit — how he kept kicking back against his dad, the school, the park-keeper, and all the busybodies of 1950s England.

Baxendale created Minnie the Minx, a girl Dennis, and then Little Plum, a loveable Red Indian boy, for the Beano in the early 1950s. Then the young Baxendale came up with a plurality of Dennises — the Bash Street Kids — for editor George Moonie. Danny, ’Erbert, Plug, Smiffy, Toots and more were in Class 2B at Bash Street, where they terrorised the mortar-boarded teacher, only ever called Teacher (and his wife, Mrs Teacher).

First called ‘When the Bell Tolls’, it rested on the mayhem that the disgorging schoolkids would unleash on the town. Moonie liked it, but told Baxendale that all the naughtiness would have to be punished at the end, as it was in the Dennis strips, where Dennis would face a slippering from his dad. Baxendale was irked at the moralising conclusion, and decided that in the redrafted strip the Bash Street Kids would be set upon by a squadron of riot police with truncheons drawn. Moonie decided it would be better without the punishment after all, and Baxendale was free to send the kids on whatever adventure he liked.

Bash Street Kids was a great success, and Moonie, and the Beano’s publishers DC Thompson, kept on asking for more. Looking over at David Law’s Dennis, Baxendale could see the problem of burning out. Law had been turning out Dennis strips for a decade, and the inspiration was hard to keep up. Over time, Baxendale noted, Dennis got lankier and skinnier, like an etiolated plant reaching for the sun, his background reduced often to a single line of horizon that fell lower, giving Dennis the appearance of a nine-foot giant wandering through 12 empty panels in search of a joke.

Though he did not use the word, Baxendale more or less had a breakdown from overwork. As he told it to me, he had gotten into the habit of working overnight to meet his deadlines. One night he was working on a Bash Street strip that sent the class to the changing of the guard, and, in his preferred style, the story would start in six or so smaller panels and one big panel of the kids confronting the guards. He knew that the way to make the picture work was to make each line of Royal Horse Guards distinct, so that one would have his bearskin cocked a little to the side, another would have a button undone. So he set out at one side of the page, working his way to the other. But he fell asleep.

To his horror, he awoke to discover that he had completed the strip in a dream state, only waking because he had reached the opposite side of the page. As he looked down, each of the guards was distinctive — one winking, another looking away – but he had no memory of drawing them. It was his unconscious that was slaving away for DC Thompson!

Baxendale cut back on his workload, and then stopped working for DC Thompson. He did other strips, like the even more mad Swots and the Blots for the short-lived Smash – a strip that captured the clash between grammar-school children and those at secondary moderns.

In 1980, he launched a court action to assert his property rights over his creations for DC Thompson — the Bash Street Kids and the others; for he was shocked to find that the firm regularly reprinted his artwork without credit or repayment. It was a titanic struggle of artist and corporation, lasting seven years, until DC Thompson settled out of court. The story is told in part in his (not very accurately titled) On Comedy. But the terms of the settlement, while recompensing Baxendale, also kept the rights to Bash Street and the rest in DC Thompson’s hands, and stopped Baxendale from reproducing them, or even telling the story. It was a rule he broke in 1990 when he gave a page of the Beano to illustrate my interview with him in Living Marxism magazine.

Baxendale withdrew from British comics. He drew a few longer works that he published himself, like Baby Face Finlayson and Willie the Kid. He wrote, too, first the story of the rights battle, and later an account of the suborning of creativity by wealth, titled The Encroachment, inspired not by DC Thompson but EP Thompson, the labour historian. He remained charming, witty and wise, a true original in the record of British humour.

James Heartfield is the author of The British and Foreign Anti-Slavery Society: A History.