Why Turkey must say No to Erdogan

A Yes vote in next week’s constitutional referendum would destroy Turkish democracy. 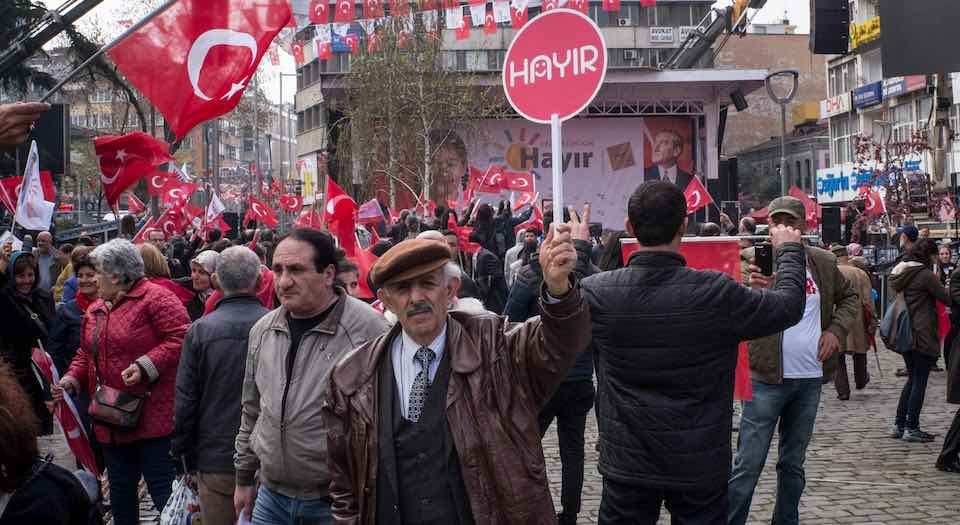 While, in recent decades, the Middle East has been characterised by a surge in instability and authoritarianism, Turkey has been regarded as one of the free, democratic exceptions. At the turn of the century, Turkey began its accession process with the EU, beginning a liberalising trend with the aim of moving towards full membership. The Turkish parliament passed laws which strengthened freedom of expression, ended the death penalty, and finally recognised the Kurds as a legitimate ethnic group, allowing them to speak and broadcast in their dialects without facing persecution.

Turkey, we were told, was progressing, and this looked set to continue when Recep Tayyip Erdogan took office in 2002. He served as Turkey’s prime minister for 11 years and became president in 2014. However, he has since mounted a war on liberty in an attempt to promote and conserve Turkish-Islamic values and shore up his own position. Erdogan’s Justice and Development Party (AKP) has cracked down on basic civil rights and free expression. Turkey now has the highest number of jailed journalists in the world.

Critics of the government are punished for acting against the supposed national interest or ‘greater good’ of society, as defined by the AKP. They are often met with police intimidation and violence, and many media outlets now practise self-censorship in order to avoid sanctions. Since 2014, more than 1,800 cases have been opened against people for merely insulting Erdogan. Opposition newspapers have been shut down, and journalists and academics who are critical of the government have been sacked and jailed. In 2013, during the Gezi Park protests in Istanbul, Erdogan shut off Twitter to limit the spread of information about the police crackdown on protesters.

Today, the AKP is using its large majority in parliament to escape political and judicial investigation into its infringements on civil liberties. Those who try to expose the government are punished relentlessly. The rule of law is weak. Next week Turkey is holding a constitutional referendum on presidential powers, and if Erdogan wins, Turkish democracy will grow even weaker.

Erdogan plans to move Turkey from a parliamentary system to a presidential one, where power will be concentrated in his hands. The changes would create an executive presidency, abolishing the role of prime minister and transferring parliamentary powers to the president. Erdogan would become the head of state, head of government and the head of the ruling party. He would appoint all cabinet ministers and two-thirds of senior judges. It would become much harder for politicians to remove him from office through a vote of no confidence.

Freedom and democracy in Turkey are under grave threat. A Yes vote in the referendum would enable further restrictions on basic liberties. Political and personal freedoms, the rule of law, the ability to kick your rulers out – these are fundamental components of a democratic society. If Erdogan is given even more power he will crush these things entirely, and submit Turkey to autocratic rule. Indeed, we’ve seen more signs of this in the referendum debate so far, in which the No campaign has had its ranks depleted by the prior crackdown and finds it difficult to get enough airtime to make its case.

If Erdogan wins the referendum, Turkey will cease to be a democratic nation. If he loses, it will mark the beginning of his demise and a potential new beginning for democratic change. For the sake of freedom and democracy, here’s hoping the Turkish people say No to Erdogan.

Deniz Karaman is a writer and student.