Mick Hume on some ideas behind his new book, out now. 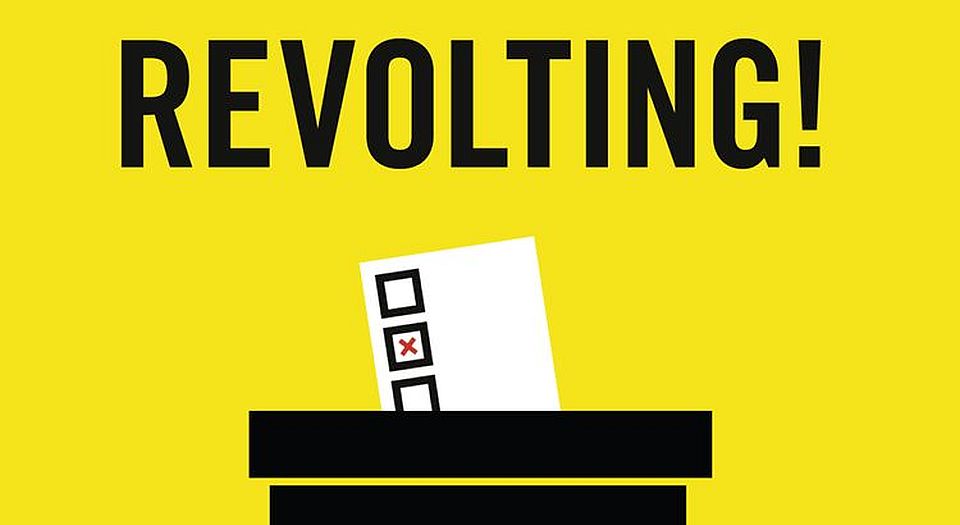 We are all democrats now, right? Nobody with sufficient brain cells to write an ‘X’ in a box will admit to being against democracy in the West today. So, what is there to worry about? Well…

Democracy should never be taken for granted. It has been under threat since it was first invented in Ancient Athens, when a powerful elite of oligarchs and philosophers defined democracy as a dirty word meaning mindless mob rule.

However, while the themes of elitist anti-democratic arguments recur through history, the specific dangers to democracy change with time. Today it is not threatened by fascism or old-fashioned autocracy, but by new enemies who even use the language of democracy to attack it.

The need to expose and oppose those new enemies is why I wrote Revolting! How the Establishment Are Undermining Democracy and What They’re Afraid Of. Although quickly conceived and written after the EU referendum in the UK and the US presidential election, the book is not just about those extraordinary events. It is about a much bigger issue – the future of democracy itself – that has been highlighted by those debates, as outlined in the opening chapter, ‘From Brexit to Trump: “…but some voters are more equal than others”’.

Here are five quick reasons why it’s time to make the fight to defend and extend democracy a priority once more.

Because the basis of democracy – the demos – is under attack today

Most talk of threats to democracy today is focused on institutions – the need to defend the US Constitution against President Trump, or the European Union against ‘populism’.

But by far the biggest threat to democracy is the renewed attack on those in whose name it rules – the demos, from the Greek for the people. Indeed, the concerted establishment campaign against ‘populism’ across the West is code for an assault on the populace who refuse to do as they are told in the voting booth.

The tendency for the revolting masses to use their democratic rights to vote for the ‘wrong’ things – from Brexit to Trump – has brought the old poisonous anti-democratic prejudices bubbling back to the surface of our societies. While experts criticise the idea of giving power to ‘low-information’ (aka ‘low-intelligence’) voters, politicians denounce the masses as ‘deplorables’.

And this is more than words. Western states increasingly invest authority in unelected, unaccountable institutions, from the courts to expert commissions and the EU, while the political class seeks to operate as a professional caste, insulated from public pressure behind closed doors.

Since democracy was created, oligarchical elites have sought to separate its two constituent elements – demos and kratos, meaning power and control. Behind the rhetorical displays of support for democracy today they are seeking to do so again, rendering the modern system of representative democracy even less representative and democratic.

Because the Brexit revolt has re-raised the historic question: who rules?

While everybody now pays lip service to democracy in principle, many in power are far less keen to spell out exactly what they mean by it in practice.

This reticence is unsurprising. The real meaning of democracy in Western societies remains largely unresolved, allowing powerful establishments to retain power behind the democratic smokescreen of systems of ‘checks and balances’ designed to check the popular will.

Yet the recent rebellion by the revolting masses who voted to leave the anti-democratic EU has brought many unresolved issues of democracy and power back into play. It poses once more the historic question: who rules?

The elitist attempts to derail Brexit through the UK’s highest courts and the House of Lords have even reopened the unfinished business of the 17th century English Revolution. Where does the real power lie between the Crown, the Commons, the Lords and the People? The image of prime minister Theresa May visiting the House of Lords this week, as a silent reminder to the unelected peers that she represents the expressed will of the people on Brexit, yet also acts in the name of the monarch, brought these questions into stark relief.

The Brexit revolt should start a new debate about the meaning of democracy, a chance to make history by sweeping away all the leftover rubbish of the Middle Ages.

Because the left has deserted the cause of democracy

One of the more disturbing trends in modern political history has been the way that the Western left has effectively abandoned the cause of democratic freedoms.

This was graphically illustrated in the EU referendum, where everybody from the mainstream Labour Party to the Corbynite Momentum group backed the establishment’s Remain campaign. Across the Atlantic, meanwhile, the election of President Trump had American lefties wishing for everything from government-by-judges to martial law as an alternative to the US system of representative democracy.

Another bizarre episode this week illustrated how far things have gone. While unaccountable peers discussed how to derail or delay Brexit in the House of Lords, thousands of radicals were demonstrating outside parliament. They were not, however, protesting against this attempted anti-democratic usurpation of the British people’s will. No, the left was protesting against the proposed state visit to the UK by the elected US president – on the grounds, as their online petition makes clear, that it would embarrass Her Majesty the Queen. If anything is embarrassing, it is this conservative royal toadyism dressed up as radical politics.

In contrast to today’s state-centred leftism, however, the British left-wing tradition with which some of us identify has always prioritised the fight for democracy and free speech, from the Levellers through the Chartists to the radical wing of the Suffragettes.

Those who believe in progress fought for more democracy and freedom, not just as a good idea or an end in itself, but also as a means to change the world. The left’s abandonment of those historic causes marks the end of that era. The pressing need now is to start a new public debate about the sort of society we want, and a fight for more democracy that cuts across old political lines.

Once majority rule was attacked as a threat to the property rights of a powerful minority. Now it is more likely to be criticised in the modern language of human rights, as a threat to the civil liberties of minority identity groups or individuals.

This trend was graphically illustrated in the backlash against the 17.4million votes for Brexit and the near-63million votes for Donald Trump, with US protesters telling Trump backers that ‘Your vote is a hate crime!’ while London protesters declared that ‘Brexit is racist’.

These arguments raise a fundamentally false counterposition between mass democracy and minority rights. Liberties, from the emancipation of slaves to women’s rights, have been won and defended as part of the broader historical struggle for a more free and democratic society. How else does anybody imagine that individuals would have had the strength to wrest their rights from the powers that be, and hang on to their liberties, other than as part of a wider collective fighting for more democracy?

Of course there are no guarantees that democracy will always deliver the ‘right’ decision. But the revolting masses whom the establishment fear and loathe remain the best hope for humanity. The alternative, of leaving our liberties in the hands of elite cliques of judges and officials, looks more like putting the fox in charge of the henhouse.

From Socrates to John Stuart Mill, many famous advocates of individual free speech have distrusted and even despised mass democracy. For the same reason, some who liked my previous book in defence of free speech, may balk at the arguments for democracy in this one. But Revolting! should rightly be seen as a companion to Trigger Warning, if not a sequel.

Because democracy must be more than a system of government

Democracy is discussed today as the best or least bad system of government, with technical suggestions put forward as to how it might be improved or refined, from proportional representation to people’s juries and more – or more likely fewer – referendums.

In the classical view, however, democracy was about much more than a system of politics or government. It was about how society was founded, embodying a view of humanity, seeing citizens as fit and able to participate and take decisions on an equal basis (even though those citizens were only white males). It was not just about the ability to place a cross in a box, but the fundamental values for which a democratic society and its members should stand and fight.

That’s why the current attempts to undermine democracy should at root be understood as further diminishing our standing as history-making human subjects.

It is fundamental to our modern humanity to be sovereign citizens with a say over our own lives and societies. The current upheavals provide both the pressing need and the opportunity for us to try to ignite anew the spirit of popular democracy, in a form fit for the 21st century. Drawing on the arguments pioneered by spiked, Revolting! is intended as a contribution to that debate, and a call to arms.

Mick Hume is spiked’s editor-at-large. His new book, Revolting! How the Establishment is Undermining Democracy – and what they’re afraid of, is published today by William Collins. Buy it here.