David Hockney: from the sun to the sublime

Hockney at his best shows us that we often look but rarely see. 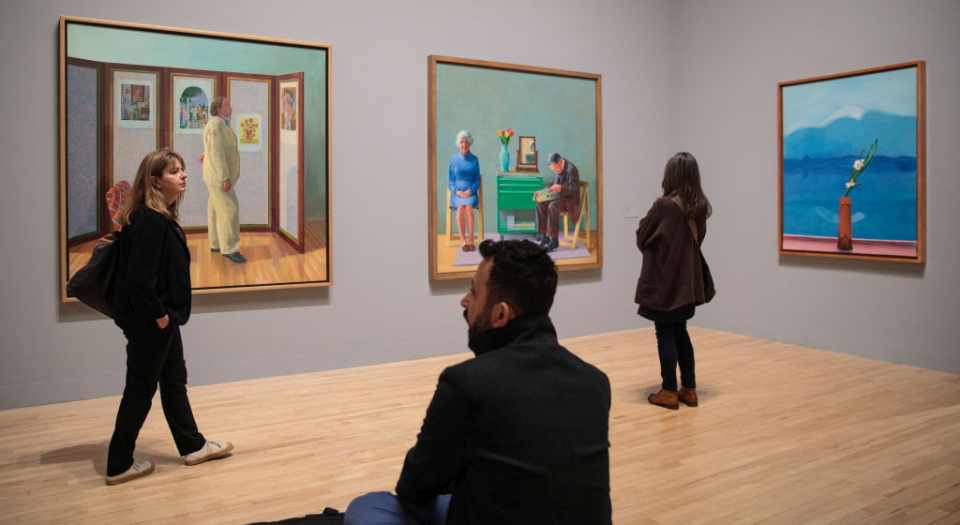 Another year, another massive David Hockney show hits London. It seems like only yesterday we were hugger-mugger at the Royal Academy’s 82 Portraits and One Still-Life exhibition. (Actually, that show opened as long ago as last July.) And only the day before since the RA hosted Hockney’s paintings of Yorkshire landscapes, A Bigger Picture. (In fact, that opened back in January 2012.) But then Hockney is undoubtedly our most popular living artist (and possibly our most popular of all time). Whatever else he does – and as the Tate’s massive yet manageable retrospective reminds us, Hockney does an awful lot – he doesn’t half pull in the punters.

There is no mystery about this popularity. Hockney, who will turn 80 in July, remains the happy-go-lucky optimist who first made a name for himself in that sunniest of recent decades, the Sixties. Pretty much the only negative thing he has ever said, in the eyes of some at least, is that he doesn’t approve of the smoking ban. Think of Hockney’s rivals for title of Britain’s most famous contemporary painter – Frank Auerbach or the late Lucian Freud – and you think of drab verisimilitude, suburban Sturm und Drang. Think of Hockney and you think of punchy colour and sun-drenched vistas. A few of the earliest paintings in the show aside – Love Painting, Tyger Painting No2, Shame, all painted in 1960, all grim and grimy homages to the kitchen-sink realists of the Fifties, and all pictures you want to get away from as quickly as possible – you will seek Hockney’s work is vibrant and elated.

The young Hockney, as Simon Schama has pointed out, was all but marketed by the Kasmin gallery as the fifth Beatle – the Macca of the museums. Half a century on, and it turns out that this wasn’t mere sales patter. There were aesthetic links between painter and popsters, too. As anyone who’s ever been to East Yorkshire knows, the place is nothing like the Big Rock Candy Mountain panorama set forth in Hockney’s Going Up Garrowby Hill. Nor is Hockney transplanting the light and colour of California, where he has spent most of the past 50 years, to his home county. No trees, not even the giant redwoods of the Sequoia National Park, are as garish and vivacious as the rubicund Swiss chard lookalikes depicted here. What Hockney has done is translate the landscape of ‘Lucy in the Sky with Diamonds’ – those ‘tangerine trees and marmalade skies’ – into visual terms.

In fact, when you look at his career as a whole, it becomes clear that one of Hockney’s core tricks has been to take the palette of tripped-out psychedelia – iridescent crimsons, gaudy emeralds, ecstatic electric blues – and press it into realist service. One of the first paintings that grabs your eye from across the room at the Tate show is made up of a large slab of turquoise and aquamarine, a smaller slab of smoky ochres and creams, and an annulus of violent vermilion. Given the dazzling clash of colours you think of op art. Given the slicing, architectural structure you think of post-painterly abstraction. Then you go over for a closer look and giggle. Because the picture is called Rubber Ring Floating in a Swimming Pool (1971), and you realise that Hockney is both guying the abstractionists’ penchant for poetic-sounding titles and reminding us that no painting, however remote seeming from the empirical world, is all that abstract.

That said, Hockney doesn’t half like to make the world look flattened and patterned. His first pictures of Los Angeles see the city and its surrounds in almost purely non-representational terms. The structures depicted in Medical Building (1966) and Savings and Loan Building (1967) are strictly two-dimensional and hard-edged, and set against unrelieved, all-over skies that might have been painted with a spray-gun. Were it not for the childishly smudgy palm trees creeping in at the foot of these images, you could be looking at a Frank Stella or a Bridget Riley. Without the orgasmic blurts and skeins A Bigger Splash (1967) is titled for, Hockney’s most famous painting could be used to teach a child geometry.

Whether this stripped down stylistic works with the human figure is another question. The central gallery in the Tate show is called ‘Towards Naturalism’, but there is nothing naturalistic about the pictures gathered here. Far from it. Every one of these massive, acrylic-painted dual portraits is ostentatiously – even stiflingly – formal and ordered. Looking at these bored couples you think not of Gainsborough (as Helen Little’s catalogue essay suggests) but of Giorgio de Chirico. Far from owning the space around them, Hockney’s subjects are defined by it. Hence the whiff of the puppet-show the pictures give off. Everybody in them, whether standing rigidly to attention or sitting stiffly in a chair, looks like they’ve been wheeled on to a stage set against their will.

Stay too long in this gallery and you get a little twitchy yourself. The symmetrised distances in which Hockney enfolds the subjects of Christopher Isherwood and Don Bachardy (1968) might catch the bitchy self-regard of Isherwood’s Letters 40 years before they were published, but this doesn’t mean it’s easy viewing. And for all the radiant LA sunlight in American Collectors (Fred and Marcia Weisman) (1968), you don’t feel any sense of ease here. With its painfully vertical subjects dislocated from one another by the graphically delineated his-and-hers changing rooms behind them, it looks less like a portrait of a marriage than a bad-tidings riff on a quattrocento annunciation scene. (Marcia’s coral pink robe is exactly the same shade as the one the angel wears in the Botticelli version in the Uffizi. It goes without saying that no Renaissance painter would dare have suggested his client’s teeth were as prominent and violent-looking as those on the Northwest Indian totem Marcia stands next to.)

The Tate show perks up again with a room devoted to Hockney’s photographs from the Eighties. Long fascinated by Picasso – whose endless fecundity has been a moral exemplar to his own prodigious rate of production – Hockney invented a way of replicating with a camera the doubt and irony of cubism. Just as Picasso (and Braque) wanted to remind you that a conventional painting’s viewpoint is just that – a viewpoint: singular and momentary, and nothing at all like our ineluctably various and temporal experience of the world – so Hockney’s cubist-inspired Joiner photographs are made up of multiple overlapping viewpoints that vie for your attention one after the other. In place of photography’s frozen (and often enough accidental) moment, Hockney had invented a way of evoking the time it takes to really scan and parse a landscape or a face.

He began by taking pictures of his dealer, John Kasmin, and the great moviemaker Billy Some Like it Hot Wilder. Using a Polaroid, he shot them dozens of times from slightly different positions – an eye in this picture, a shoe or trouser-cuff in that. Then he’d painstakingly reassemble the results into a grid (and I mean a grid: Hockney made a virtue of the Polaroid’s characteristic white frames, using them as punctuation marks to hammer home the fact that these were composed images) that accretes into a single yet simultaneously multiple image. Back in the Victorian era, when photography was young and film was slow, people had to have their heads held in place by clamps so that they remained still during the interminably lengthy exposures the snapper required. Hockney’s joiners made the artificiality of sitting (at least relatively) still part and parcel of their subject matter. Like all the best portraits, in other words, their subject isn’t just space, but time.

Having abandoned the Polaroid for a conventional 35mm camera, Hockney went on to use the joiner technique for landscapes. Not all of these were successful – though Pearlblossom Hwy, a collage of images, taken over the course of a week, of a road intersection between LA and Vegas may be Hockney’s greatest single picture – but three decades later they have led him to the best work he has done this century: The Four Seasons. The Tate have given over a complete room to this – and you’ll know you’re getting near it when you hear the crowds ahead of you draw in violent, ecstatic breaths. To sit in this room for ten or fifteen minutes is to be transported utterly.

What Hockney has done is shoot a stretch of woods in the Yorkshire Wolds during each season of the year. But he has done so using nine high-definition digital video cameras, attached at different heights and angles to the roof of a Land Rover driving ever so slowly through the trees. The result is four walls, with nine screens apiece ranged in a three-by-three network, showing you films of various parts of trees and leaves, sunlight dappling them here, snow falling off them there, blue sky burning through here, grey sky dulling everything down there. Now and then the component images come together, so that for a split second the trunk of a tree can be seen whole. But no sooner have you realised the fact than the image has broken up again. Cunning Mr Hockney. He has made you feel the earth move, by reminding you, like Sherlock Holmes before him, how we so often look but so rarely really see.