Everyone needs to stop talking about ‘white people’

How the elitist fear of the underclass was given a PC makeover. 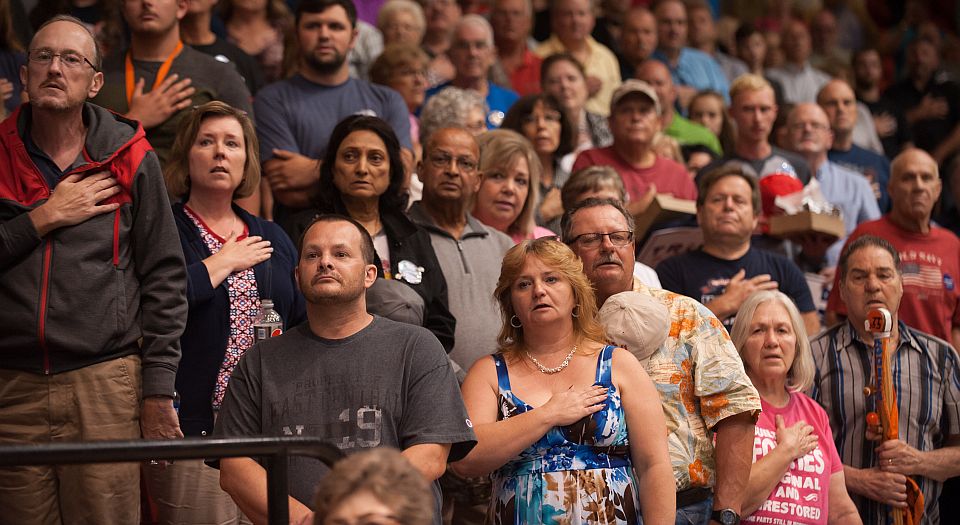 As fun as it is to watch those anti-Trump demos on which white people carry placards slagging off white people, and to read white columnists raging against white rage, and to see white women in the press tearing their hair out over white women who voted for Trump, it’s time to take down the modern left’s obsession with white people.

For following Trump’s shock ascendancy to the White House – another WHITE institution – it’s become clear what all this ‘white people’ talk really represents. It’s not a radical, post-racist attempt to expose where power lies in society and discuss how it might be challenged. On the contrary, it’s a racially charged, dehumanising expression of class contempt by well-connected white people, and some non-whites, for the wrong kind of white people: bad whites; unthinking whites; the dim or undeserving poor; or what used to be known, in times when vile elitism at least had the decency to be honest, as ‘the underclass’.

In the week since Trump’s victory, all eyes, and bared teeth and claws, have been on white people. Fifty-eight per cent of white voters, including 53 per cent of female white voters, went for Trump. Cue rage against white folks. ‘Dear White People’ letters, easily the most grating trend in modern journalism, quickly appeared. One reminded Trump voters who think of themselves as ‘good white folks’ that ‘human history is full of examples where “good” people… did wicked things to their fellow citizens’. So you might actually be evil, you just don’t know it, because you’re stupid.

Others bemoaned the ‘white male rage’ that brought Trump to the White House. There’s been widespread tut-tutting over ‘white privilege’, of course, the buzzphrase of our age, which suggests that history has gifted to white people a sense of superiority over all others. The term ‘whitelash’ has entered everyday media talk: apparently the vote for Trump was a backlash by non-blacks against social progress. Even Polly Toynbee, the whitest person in Britain, suckled at the bosom of true privilege, is using the term ‘whitelash’, which is hilarious.

For a few years now, the term ‘white men’ has been used as shorthand for evil. Apparently white men are running, and ruining, society, the economy, the internet, and everything else. Now, following Trump’s rise, ‘white women’ are getting it in the neck, too. ‘How white women’s fear helped elect Donald Trump’, one headline sneers. Feminists tell us these white women suffer from internalised misogyny, the poor dears, where their brains have been fried by ‘the culture’ and they end up hating themselves.

Where history and culture, those allegedly awesome forces, make white men think of themselves as better than everyone else, apparently they make white women think of themselves as shit, so that they start behaving like ‘slaves fluffing the pillows of their master’s rocking chair on his porch as he shouts abuse at them’, as female white Trump voters were described by one feminist. I say feminist; I’m actually struggling to think of anything more anti-feminist, more anti-women, than the foul suggestion that certain women have such tiny, suggestible minds, such a stunning lack of capacity to govern their own thoughts, that they can be made into slaves simply by seeing and hearing certain things.

That many of these attacks on white people are coming from white people is revealing. This doesn’t only point to a weird self-hatred among white leftists and white observers. More importantly it tells us that the term ‘white people’ doesn’t actually refer to individuals who happen to have white skin, who are Caucasian. No, ‘white people’ is a highly moralised category, a profoundly charged term, not a descriptive one. ‘White people’ is more akin to ‘underclass’, ‘untermenschen’, in that while it presents itself as merely an identifying phrase it is in fact underpinned by prejudice and fear and loathing. It’s not a factual term; it’s a hateful one.

There are so many problems with the way ‘white people’ has become the go-to phrase for every radical and edgy commentator – most of them white, for God’s sake – who wants to signal their sensitivity to issues of race and power. The first is its dehumanising impact. The way it erases cultural, political and most importantly class differences among white people so that they are reduced to a same-thinking, same-privileged swarm that poses a threat to the safety and self-esteem of minorities.

‘White people’, in its political rather than descriptive sense, is such a perverse phrase. As if the white man who owns a bank is indistinguishable from the Rust Belt white guy who works on a production line. As if the white man who runs the European Commission is the same as the white men who must trek from the east of the EU to the west just to find some (hard) work. Radicals’ obsession with whiteness speaks to their utter abandonment of the idea of class, and of any attempt to analyse and rethink social relations. They now prefer to mystify power, to turn it from a real, lived, analysable thing into a kind of magic that is passed between white-skinned people through history and through culture and the internet. In the process they utterly demean working-class whites in particular. They airbrush their experience from the record (and I thought erasing people’s lives was the worst thing you could do) through suggesting they are part of some strange, free-standing system of magically gifted privilege; that their struggles and sense of identity count for nothing in the broader scheme of their skin colour.

Then there’s the way ‘white people’ talk racialises politics, and public life, and everyday life. It lures us into the racial imagination; it positively encourages racialised thinking. It replaces the foul biological determinism of the old racism, which suggested blacks were governed more by instinct than mental faculty, with a new historical determinism that says blacks have been permanently wounded by historical experience while whites have been made arrogant by it. Terms like ‘stay in your lane’, used by supporters of Black Lives Matter to chastise whites who want to help lead the fight for black equality, confirm how divisive the new racialism is, and the impossibility of solidarity in an era of skin-colour determinism and politics-by-identity.

The white-people obsession turns whiteness into a kind of original sin, a marker for wickedness. To be white is to be corrupted — from the moment of birth — and so one must spend one’s time atoning and apologising. This is why we have the cult of white privilege-checking, where well-educated, racially minded ‘progressive’ whites will ostentatiously watch what they say around blacks, take a back seat in debates about race and power, and preface their every utterance with the words ‘I know I’m white, so this might be invalid, but…’.

This privilege-checking is best understood as a performance of sensitivity, of heightened awareness – of superiority, ironically. The message is that I, unlike other whites, have managed to a certain extent to overcome my historically determined privilege. It’s a statement of superiority over bad whites, uneducated whites, ‘trolling’ whites, Trump-supporting whites – what one commentator this week referred to as ‘low-information white people’, which is just PC for ‘untermenschen’. This is the great and terrible irony of white-privilege theory and practice: it reproduces in progressive language one of the key racial dividing lines of darker historic moments – that between good Aryans who have a heightened sense of themselves and their role in the world and those dim, feckless whites who are unknowing and destructive, lacking all moral sensitivity, governed by instinct or, in modern parlance, by the force of history.

And this is what the current Trump-hooked fear of ‘white people’ is all about, too. It’s self-distinction, the creation of a swell of problematic people – White Men and now White Women – against which the better-minded might distinguish their own decency. Many anti-Trump observers have defensively insisted that by ‘white people’ they don’t only mean Middle Americans and Rust Belt folk but the wealthy whites who voted for Trump, too. Don’t buy it. One of the most distinctive things about this election is that a higher number of poor whites voted Republican than normal (and, strikingly, a higher number of rich whites voted Democrat than normal), and it is these whites, these folks who shifted the election, who sealed Trump’s fortune, that are truly feared.

When commentators talk about ‘low-information white people’, and those obsessed with gun rights, and those who aren’t sure about immigration, do you think they’re talking about the rich white guy in a suit in Florida who voted Trump? Please. We know very well who they’re talking about. They’re talking about the same people who stalk the nightmares of Remainer politicians; who made the UK Labour Party ditch the politics of class in favour of the ‘politics of behaviour’ designed to correct slovenliness and stupidity; who made some observers flirt with the idea of making London its own republic post-EU referendum; who are the objects, not the subjects, of every modern political initiative, be it ‘nudge’ policy, the nanny state, or education schemes on how to have sex, how to raise children, how to treat women, and basically how not to be scum. They’re talking about those people. Them. Those whites. The other whites. The inhabitants of the Dark Heart of America, the gruff speakers and unhealthy eaters of the north of England. The insensitive, the ungrateful, the unlearned. Oh for the honesty of the old elitists, who said what they meant: the racially inferior, morally inferior underclass. That’s who they’re talking about.