The EU’s meltdown over Trump

European leaders fear a similar revolt of ‘deplorables’ over here. 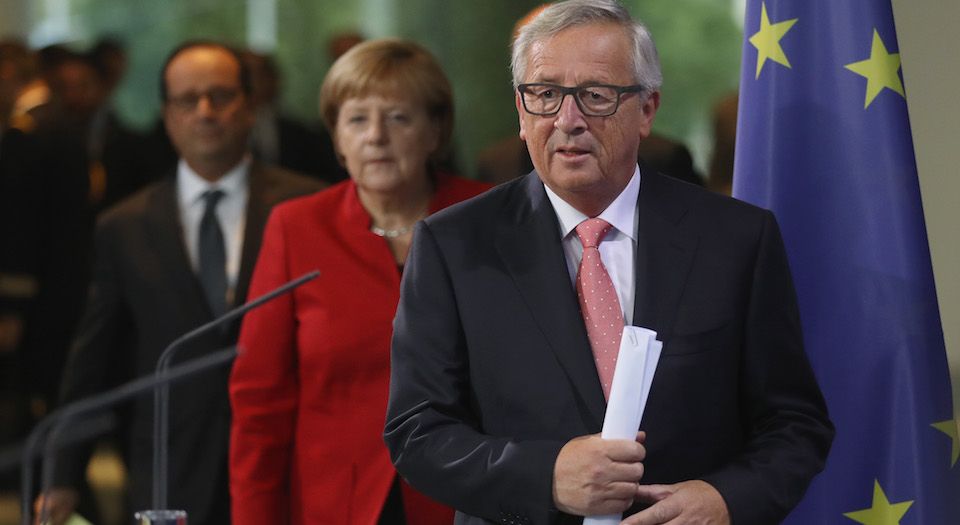 Since the election of Donald Trump, the European Union has gone into meltdown. On Sunday, in a move that would usually follow a serious crisis like a major act of terrorism, EU foreign ministers held a special emergency meeting to discuss the implications of a Trump White House.

On the same day, the NATO secretary-general warned Trump that the US must not abandon its European NATO allies in the face of great security challenges. Yesterday, former NATO chiefs called for a meeting with Trump. The president of the European Commission, Jean-Claude Juncker, has also warned that European leaders will have to teach Trump what Europe is, and how it works.

German chancellor Angela Merkel made an extraordinary statement after the election. She held out a conditional hand of cooperation to Trump on the basis that he promise to behave properly. Merkel posited herself as the embodiment of liberal, democratic values, in contrast to Trump’s narrow nativism: ‘Germany and the US are connected by values of democracy, freedom and respect for the law and the dignity of man, independent of origin, skin colour, religion, gender, sexual orientation or political views… I offer the next president of the United States close cooperation on the basis of these values.’

At first, this led to speculation that Germany might seek to assume leadership of the supposedly liberal West. But this is unlikely, given internal German political woes. In fact, Merkel’s pompous statement was straight out of the script that EU elites have been reading since Maastricht. Since its founding, the EU has presented itself as a new kind of power, in which the rule of law and democracy had triumphed and serious internal, social or political conflicts were over. According to EU elites, there is nothing left to do in Europe other than carry on with the project of increasingly harmonious living.

The EU model, they claim, was realised not through hard power, but by promoting democracy, law and human rights – primarily through the accession process. In 2004, 10 states joined the EU, including seven former Warsaw Pact states: Slovenia (which had been part of non-aligned, but nevertheless Communist, Yugoslavia), Malta and Cyprus. These states had undergone a decade of peaceful internal transformation in order to meet the accession criteria. There were also schemes like the European Neighbourhood Policy, which, while not promising membership, encouraged internal transformation.

The EU was presented as a fundamentally different way of doing politics. Its conceit was that it was, in Robert Cooper’s words, a ‘postmodern power’. Or, as Ian Manners put it, a ‘normative power’: a new kind of power that ruled and influenced, not through hard power, as did the US, but through democratic consensus, persuasion and liberal values.

It was a fantasy. The post-Maastricht EU was, and is, a contested political and economic system. When various EU member states had to go to their citizens to authorise increased integration, voters often said No. French and Dutch voters rejected the proposed European Constitution in 2005. Not content to let the people stand in the way of democracy, the EU repackaged the Constitution as the Lisbon Treaty. When Ireland rejected the Constitution in a national referendum, it was told to vote again – and to do it right this time. Ireland had already had some experience of this – it rejected the Treaty of Nice in a referendum in 2001, and was forced to vote again the next year.

Relative stability has been maintained in the EU by ignoring objections, and then removing more and more political issues from the public arena. Some of the 2004 states, such as Poland and Hungary, have been put on the naughty step for their domestic policies. Meanwhile, EU elites have ignored crisis after crisis. The Euro has been a disaster for many states, including Greece, Spain and Italy. But it has limped along, supported by shrinking economies and rising unemployment. Even the supposedly strong German economy has had to depress the wages of its workers, cut investment and rely on exports to function.

Nor has the EU represented an alternative, peaceful kind of power to the US. It only exists in the context of the US-led world order. As Robert Kagan pointed out in response to Robert Cooper’s ‘postmodern power’ claims, the EU functions as it does because of the US, for good or for ill. The US was never an opponent of the EU, as some on the left came to see it. Rather, the EU was a fundamental part of the new world order established under US hegemony after the Second World War. Therefore, when the pre-Trump US repeatedly told the UK that it would be less important outside of Europe, it meant it. It’s the EU that matters to the US, not the UK.

The idea that Trump will destroy the liberal world order is absurd. The US-led Libyan intervention, supported by some EU member states, was a catastrophe – hardly a testament to human rights. And Juncker’s claim that Europe has much to teach Trump about how to treat refugees is extraordinary. While Trump wants to deport Mexicans back to Mexico, the EU manages migration by creating a Fortress Europe that leads to migrants drowning in the Mediterranean, or by paying African dictators to prevent their citizens from leaving.

Trump’s comments about Europe, his support for Brexit and his comments about NATO have genuinely horrified EU elites. The idea of a divergence between the US and the EU might actually be coming closer to reality. And then where would the EU be? It seems impossible to imagine that the US will really disband NATO, or that Germany will end its special relationship with the US. The fact that a US president-elect could even say such things is proof of how far removed Trump is from the international elite consensus on Euro-Atlantic relations and policies.

However, there’s more to it than that. The reason EU leaders had a cow after the US election was because the dynamic that got Trump elected exists within the EU as well. As Pierre Moscovici has said, there is a major crisis of the establishment across the West. Brexit was the first concrete expression of it in Europe. The Italian referendum on constitutional reform could be the next. If the reform is rejected, it is likely to be the start of a much broader political crisis in Italy. Next year, there is also the threat of the French presidential elections, which Marine Le Pen has a serious chance of winning, and the German elections (Merkel’s Christian Democratic Union is already losing votes to anti-immigration party, Alternative for Germany).

Rather than reckon with this crisis, elites in both the US and Europe are simply blaming Russia, the FBI, or ‘deplorable’ voters. They’ve also brought in heavyweights, like the NATO general-secretary, to threaten all sorts of fearful occurrences if the status quo is rejected. As Wolfgang Munchau argued in the Financial Times a few days before the US election, political elites are refusing to acknowledge that there is a problem, and are instead trying to scare voters into maintaining the status quo.

The problem is with them, the elites, not with us, the voters. A majority of Germans, for example, do not like Trump, but a majority of Germans are also pretty unhappy with the German political establishment. If that establishment was wise, it would try to resolve its own domestic problems, rather than lecture Trump. But the EU’s response to Trump suggests Europe’s political elites will not change course any time soon.