…is the transatlantic elite’s hatred of democracy. 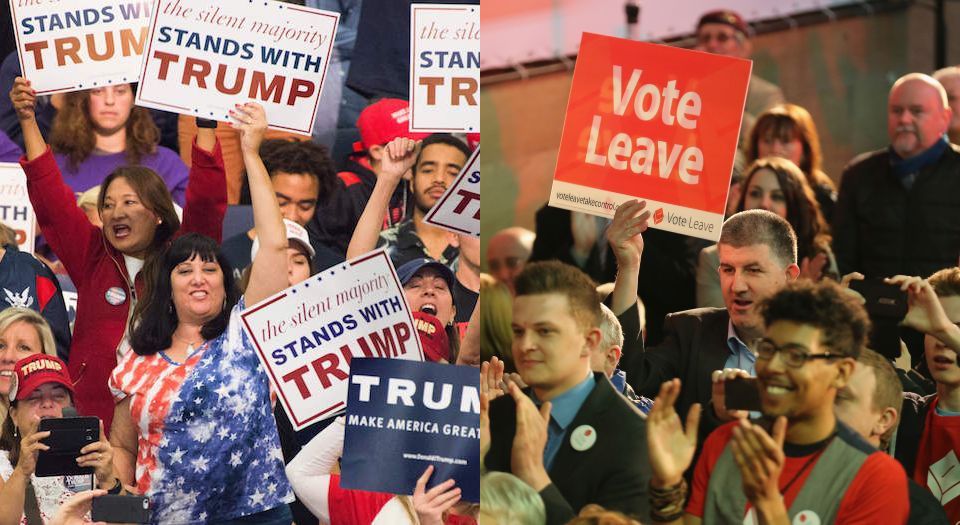 Many of the comparisons being made between Donald Trump’s election in the US and the Brexit vote in the UK referendum are bogus.

True, both results reflect the intensity of feeling against the respective political establishments. But the outcome is quite different. Whereas the vote to Leave the EU was a positive blow for more democracy, the turnout for Trump is a negative reaction to the same problem of political legitimacy.

That is why some of us in the UK who voted Leave with passion could not have contemplated voting for the execrable, illiberal, anti-democratic, free-speech-stomping Donald. Nor, by the way, could we have stomached supporting the illiberal-liberal Hillary Clinton. (Note to the confused: Brexit was not a vote for Trump fan Nigel Farage, who responded to his triumph by giving up politics rather than taking power.)

No; the genuine comparison between the two concerns not the actors, but the reaction to the results.

Both Trump’s election and the Brexit vote have been met by an outburst of fear and loathing from political and cultural elites and their supporters in the US and UK. They have expressed their true contempt for the masses, and brought the anti-democratic sentiments long kept hidden from public view bubbling back to the surface of our civilised societies.

Hours after the US votes were announced, the Trump-thumping transatlantic media seemed less interested in the Republican candidate’s victory than in the protests against it in several American cities, as if this was the real result. Protesters made headlines with slogans such as ‘Not my president’ and ‘No Trump, No KKK, No Fascists USA!’. (Note to the historically confused now comparing Trump with Adolf Hitler: Whatever Hitler was – a genocidal Nazi racial supremacist – he was not a buffoonish celebrity loudmouth who made up and tore up policies as he went along.)

Meanwhile, intellectuals and celebrities recoiled in horror at the realisation that millions of Americans had failed to vote for Hillary as they had been instructed by Beyoncé, Jay Z, Bruce Springsteen and Madonna. ‘Hollywood stars “terrified” and “sad” as Trump elected president’, headlined one round-up of their expressions of outrage and angst on social media.

The basic message was that Trump voters must all be racist, misogynistic, homophobic and Islamophobic. As one response summed it up: ‘He made America hate again.’

It could not be that ordinary Americans had voted for such a ghastly option as Trump because of their grim experience under the Democratic Party, as represented by Clinton and President Obama. It had to be that there was something wrong with the voters.

As every anti-democrat since Plato has believed, for these elitists the problem with democracy is the demos – the people.

This was a sentiment expressed through the campaign, most notably in Clinton’s characterisation of half of Trump supporters as ‘deplorables’; leading Democrats responded by complaining that she had been wrong to only label half of them as such.

And the notion of ‘deplorable’ voters being bad for US democracy did not begin in response to Trump. Clinton’s outburst was the end result of a long-running, high-level discussion about how too many Americans don’t know what is good for them, and how ‘low information’ (code for ‘low intelligence’) voters use their irrational ‘lizard brains’ to vote against their own interests (code for ‘Republican’).

Once you see the mass of people in that way, the implications for democracy are evident: we don’t want too much of it! Watching the rise of Trump in Spring 2016, Andrew Sullivan, British-born conservative commentator on American politics, caught the mood of many in the US elites with his argument that ‘democracies end when they are too democratic’.

To prevent the horror of the system becoming ‘too democratic’, this leading voice of modern conservatism called on all decent Americans not just to vote against Trump, the Republican candidate, but to rally to defend ‘the elites’ and ‘the political establishment’ who ‘provide the critical ingredient to save democracy from itself’ and ‘its own destabilising excesses’. Which might sound a bit like the US army officer in Vietnam infamously explaining how ‘It became necessary to destroy the town in order to save it’.

Back in the UK, we have seen much the same outpouring of contempt for democracy and disgust at its ‘excesses’ in response to the popular vote for Brexit. The notion that people were too stupid and ignorant to be allowed to vote on such an important issue, too gullible and easy-meat for ‘populist’ demagogues, has been the stuff of countless articles, reports, posts and outbursts since the June referendum.

The message was well captured by the official post-referendum t-shirt produced by the Guardian, house journal of bitter Remainers, declaring ‘Never underestimate the power of stupid people in large numbers’. They wear their anti-popular prejudices with pride. Maybe the Guardian will sell a few to well-heeled American readers now.

If there is a dangerous hatred on view today, it is the hatred of the democratic ‘herd’ expressed by elites on both sides of the Atlantic. Contrary to what they believe, if there is a crisis of Western democracy, the solution is more democratic debate and engagement, not less.

The isolation of these types from the people they look down upon was summed up by those last-gasp celebrity rallies for Clinton. They seemed seriously to believe that the image of Madonna caterwauling a godawful acapella version of John Lennon’s ‘Imagine’, interspersed with screeching ‘No way, motherfucker!’ in Trump’s direction, would make a difference on voting day. Imagine that…

Appalled American celebrities have sworn to emigrate after Trump’s election. But they already appear to be living on a different planet.