A Trumpocalypse? Oh do grow up

It is the anti-Trump set that is trading reason for emotionalism. 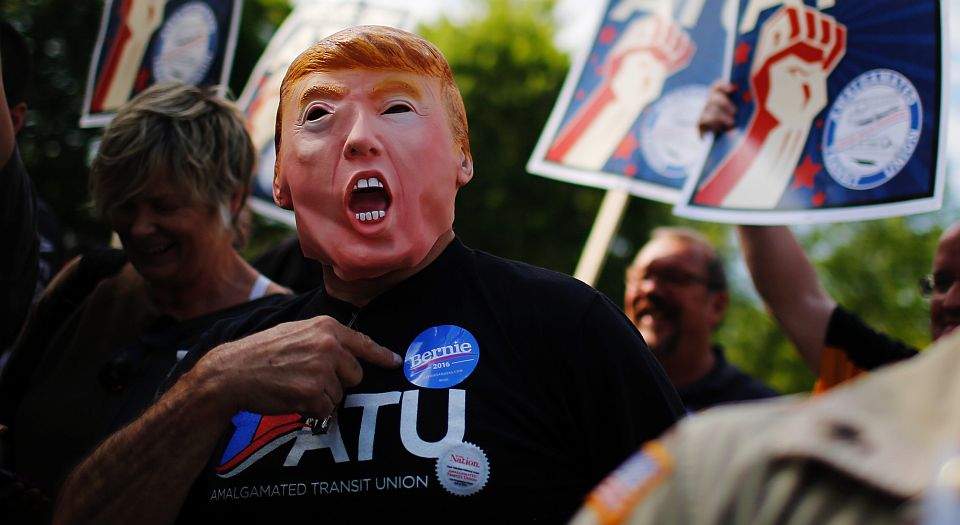 There’s a dark irony to the somewhat swirling media response to Trump’s victory. For months now, observers have been telling us that Trump’s army is motored more by feeling than reason. Trumpism is a movement based on ‘untrammelled emotion’ over ‘reason [and] empiricism’, said Andrew Sullivan. Trump makes ‘sly appeals to… human irrationality’, said Scott Adams, creator of the Dilbert cartoon. Like all of history’s demagogues, Trump conjures ‘vivid images and intense emotions’, said a writer for the Conversation. Especially in relation to security: apparently he plays on people’s feelings of ‘uncertainty or instability’.

Yet now, as Trump’s victory shocks the world, or at least that portion of it that lives in its own echo chamber, who is it that’s exhibiting ‘untrammelled emotion’? Who’s conjuring up ‘vivid images’ and ‘intense emotions’, particularly with regard to security? It isn’t Trump’s supporters, most of whom went from the ballot box back to their everyday lives. It’s the anti-Trump set. It’s those who spent months claiming Trump supporters lack the mental and moral equipment necessary for ‘reasoned deliberation’. Many of these rather elitist politicos and observers are behaving in a way that makes even the most hot-headed Trump cheerer look perfectly rational in comparison.

The emotionalism of their response has been intense. ‘“I feel hated”, I tell my husband, sobbing in front of the TV in my yoga pants and Hillary sweatshirt’, said an American columnist in the Guardian. Former UK foreign secretary Margaret Beckett says Trump’s victory feels like ‘the end of the world’ (bit rich coming from a woman who voted for the Iraq War in 2003). Emotion over reason is widespread: the Washington Post reports that ‘mobs of tearful students’ are protesting against Trump’s win; some American universities are providing counselling for those ‘traumatised’ by Trump; celebs including Miley Cyrus and Perez Hilton have issued videos of themselves weeping over Trump’s victory, which have been shared hundreds of thousands of times by similarly frazzled Hillary backers.

Even worse than the emotionalism is the apocalypticism. Trump conjures up ‘vivid images’ to exploit people’s feelings of ‘uncertainty’? Yes, he does, but not as intensively as anti-Trump observers have been doing. British historian Simon Schama said Trump’s victory will ‘hearten fascists all over the world’ and is reminiscent of Hitler’s rise. Trump’s victory is the ‘greatest calamity to befall the West since World War II’, says Guardian columnist Owen Jones, clearly having never experienced the deprivations of 1970s recession or 1980s class conflict. Cheap, history-exploiting Hitler comparisons are rife: protesters hold up pictures of Trump with a Hitler moustache while celebs cry over America becoming like ‘Germany in the 1930s’.

The deployment of emotion over reason, the eschewing of empiricism in favour of ‘vivid images’ designed to scare people, is coming primarily from the chattering class, not the ‘Trump mob’. The marshalling of Hitler and the Holocaust to denounce Trump is especially low. Lacking a coherent outlook or even language through which to understand the Trump phenomenon, far less cogently critique it, anti-Trump observers rummage through history in search of moral authority, seeking to mobilise the great crimes of the past as stand-ins for their own ill-formed feelings, a cover for the disorientation they feel as they look around the 21st-century West.

This demeans history. The unique barbarism of the Holocaust is severely cheapened when it is talked about in the same breath as a politician who simply says intolerant things. Trump-Hitler talk also makes it harder to gain a true and grounded understanding of what is driving the Trump phenomenon and what is happening in Western politics. This is not the 1930s; ideology across the board is weak, not strong; Trump has no plans whatsoever to destroy an entire group of people. And the promotion of such historically illiterate ‘vivid imagery’, the ‘untrammelled emotion’ of crying ‘Trump is Hitler!’, muddies the present and our ability to understand it as much as it empties historical events of their meaning through prostituting them to the political needs of the present.

If anti-Trump observers really were given to ‘reasoned deliberation’, they would surely see how unhinged is their post-election apocalypticism. Even Trump’s more intolerant proposals, such as his promise to wall off Mexico and launch wars on Islamists overseas, are run-of-the-mill stuff, sadly. There’s already a vast metal fence between America and Mexico, and Hillary was one of the politicians that voted it into existence (with the Secure Fence Act 2006). Hillary – and Obama, and before him Bush – have already launched wars in the Middle East that have been disastrous for humanity. As for fascism coming to the US: America’s National Socialist Movement has around 400 members; other neo-Nazi groups have fewer than 100. These are, thankfully, tiny and tragic organisations, strikingly unboosted by Trump’s rise. But then, why use ‘reason [and] empiricism’ – values the Hillary side claims to adhere to – to understand the true nature of the far right in the US and the very different nature of Trump’s success, when you can simply and rashly say: ‘Hitler is back. The 1930s have returned. We are doomed.’

The weeping over Trump, the apocalypticism that greeted his victory, tells us something important about the political and media establishments. It reveals how utterly distant they are from ordinary people, especially those in the ‘dark heart’ of America, whom they look upon as aliens, Nazis-in-waiting, who hate minorities and women. There is a certain irony, no, in their denunciation of the Trump set as fascists even as they themselves dehumanise whole swathes of people? More profoundly still, their apocalypticism speaks to an elite that has no political or ideological anchor, and thus no means of making sense either of world events or of its own isolation. Sensing that its authority is under assault in an unprecedented way, at least in modern times, this elite has no way of responding other than through tears and fear and panic.

So the weeping is not really an act, not simply another example of emotional incontinence in these Oprahite times. It reveals something weirder, darker: an establishment whose lack of connection, lack of grounding, lack of conviction, means it finds it difficult to read the world or act on it in a rational, interested way. And then they wonder why some people think it can’t be any worse to give Trump a try.