Michael Moore: the Leni Riefenstahl of the Hillary campaign

Moore shreds his own reputation with his propagandistic ode to Hillary. 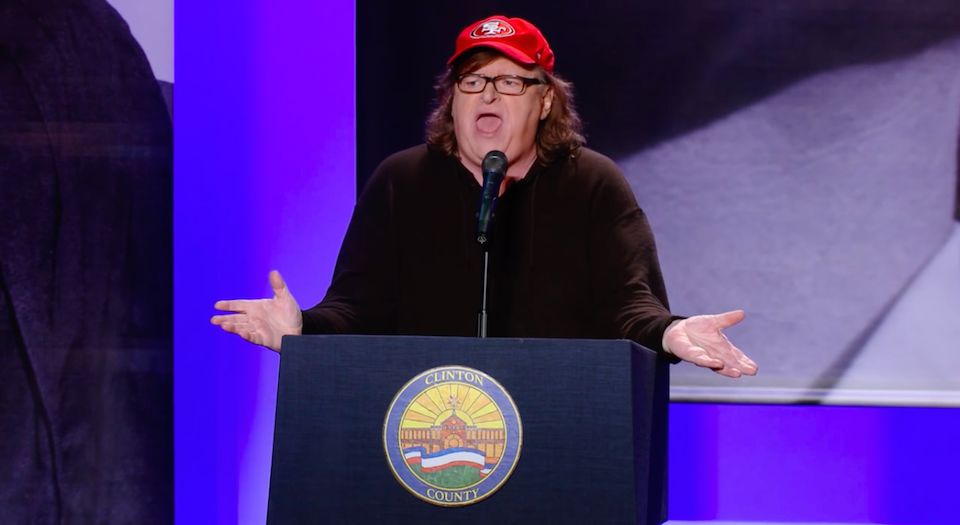 Michael Moore in Trumpland is the most craven prostitution of celebrity to power of recent times. Taking to a stage decorated with massive, flattering photos of Hillary, his lip trembling as he tells his audience that ‘Maybe, just maybe, Hillary could be our Pope Francis’ — I’m not making this up — Moore gives us a masterclass in the use of comedy for propaganda purposes. It’s pure cult of personality. His audience members dab their eyes as Moore shakily speaks of his ‘forbidden love for Hillary’ and describes her as ‘beautiful’ and a ‘shit-kickin’ feminist’ whose ascendancy to the White House would be a great act of redemption by the American people for America’s past wrongs, especially against women. From Bush-basher in chief to the Leni Riefenstahl (minus the artistic vision) of the Hillary camp: Moore’s fall is complete, his shift from self-styled radical to overemotional establishment lackey finalised.

I was expecting Trumpland to be another slice of chattering-class Trump-bashing, with switched-on liberal Moore venturing into flyover America to tell voters with red necks and Trump fever to change their stupid ways. The movie, which hit American cinemas last week and was yesterday sold as a TV special to broadcasters in 13 countries, including Channel 4 in Britain, is a 73-minute stand-up routine performed by Moore in Clinton County, Ohio, one of the most pro-Trump bits of America. (‘We might be in Clinton County, but we’re not in Clinton country’, he says.) Great, I thought: he’s going to wag that big liberal finger at gun-lovin’, Bible-clutching bogeys as his New York, LA, Chicago and Seattle audiences chortle into their artisan popcorn.

But actually, and surprisingly, he’s relatively nice, or at least understanding, about Trump voters. He has a good line about how ‘Joe Blow, Bob Blow, Billy Bob Blow’ — ‘all the Blows’ — have had everything taken away from them: their jobs, their community life, their sense of self-worth. But they have one thing left, he says, a thing guaranteed to them by the American Constitution and which gives them as much power as any millionaire: the right to vote. And understandably, these guys, these ‘Blows’, will use that one remaining bit of power to ‘blow up’ the elites that fucked them over. Yep. He’s not wrong.

And yet the film manages to be something worse than the shallow Trump-bashing, which is mostly white-trash-bashing, we’ve come to expect from coastal politicos to whom Middle America is as mysterious as Aleppo: it’s a disturbingly emotional ode to Hillary. From, weirdly, a man who backed Bernie. Against a backdrop of huge, black-and-white pics of Hillary at university and Hillary as a lawyer and Hillary in a mini-skirt leaning against a tree, Moore champions her as the clever, sassy potential saviour of America. She’s smart, she’s caring, she has mostly done good in the world, he says, clearly knowing nothing — or, worse, caring nothing — about the havoc she played a leading role in wreaking upon Libya and Syria.

At one point he recalls meeting her in the 1990s when she was First Lady, when she apparently clasped his hand and told him she was his biggest fan, and it’s so creepily obsequious I cringed so hard I think I gave myself a hernia. He flashes up a photo of Hillary watching him walk away from that love-in meeting, and she’s grinning happily and possibly saucily: there’s a weird sexual undertone to the whole thing, amply fuelled by the big mini-skirt pic of Hillary behind him. Then he gets the audience, which includes some Trumpites, to stand up and say nice things about Hillary. She has a lot of qualifications, says one. She loves children, says another. She works hard. ‘Yes!’, Moore says to each of these emotional odes to Hillary. He revels in their praise for his ‘forbidden love’, and coaxes them to give more.

It’s positively North Korean. If we saw a NK comic do a routine that basically involved cajoling the audience to sing the praises of Kim Jong-Un, we’d think ‘God, these poor people can’t even chill at stand-up’. Yet here we have one of America’s best-known funnymen turning a comedy show into a cultish-cum-therapeutic rally for the possible next Commander-in-Chief and no one bats an eyelid. In fact they praise him: Moore ‘devotes that [comic] mastery to a high patriotic calling’, gushes the New Yorker. Change the word ‘Hillary’ to ‘Kim’ and cut out the handful of f-words and this bizarre film could be shown frame-for-frame in Pyongyang.

Most strikingly, Moore presents Hillary as a victim, which requires extreme political contortionism, given Hillary is arguably already the most powerful woman in the world and was in charge of the US State Department for four years. He says she endured bum-pinching and insults in the Seventies, was treated badly by the media in the 1990s, and is still getting loads of crap today (some might call it political criticism). Making her president is a way to atone for such sins, he says, and show that America has grown up. It’s such symbolics.

Hillary has been ‘biding her time’, Moore tells us, patiently and beautifully (he really does fancy her) waiting for her moment to get into the White House and do some actual good, such as prosecute cops who kill blacks and ‘ban high fructose corn syrup’ (this actually got a cheer in the New York cinema I watched the movie in, making me weep silently for the state of New York radicalism). In this biding of time before finally injecting her radicalism (what?) into clapped-out institutions, Hillary is like Pope Francis, says Moore. Yep, he thinks the Bishop of Rome, God’s emissary to sinful Earthlings, is rad. He stares out at his Clinton County audience, and then down the camera lens, and says with a crack in his voice: ‘Hillary could be our Pope Francis.’ It’s the only bit of the film that made me laugh, and it wasn’t a joke.

Try to imagine if a British comic did a 73-minute stand-up routine turned political rally for, say, Tony Blair. If Stewart Lee or Steve Coogan did an unironic set in which they got the audience to stand up one by one and attest to Blair’s beauty and decency. Or if Alan Carr took to a stage coated in photos of Theresa May and described her as an amazing cross between a pope and shit-kickin’ radical. We’d think them mad. Why is Moore’s movie being treated seriously? It’s one of the weirdest films I’ve seen.

But it is of a piece with much liberal commentary on Hillary now, which elevates the symbolism of her becoming the first female president over any intelligent critical discussion of her actions as secretary of state or her policies. Indeed, much media Hillaryphilia actively whitewashes her record and discourages, even demonises, confrontation with her political ideas and behaviour. Consider the widely shared Slate piece that lists 230 ‘sins’ committed by Trump against the one and only sin committed by Hillary: ‘Poor email server management.’ No mention of her militarism, her illiberalism, her elitism in relation to ‘deplorables’. That all goes down the memory hole.

Or consider American journalist Richard Wolffe’s insistence that anti-Hillary blather consists of nothing more than ‘pseudo-scandals’, since Hillary is actually scandal-free. So forget Benghazi, or Libya more broadly (a disastrous war she cheer-led), or her shady dealings with Syrian oppositionists that helped inflame that most infernal war. Down the memory hole. Or consider the Guardian columnist who says ‘Hail Hillary’ because what’s truly important is that her becoming president would confer ‘recognition’ on women. Forget the women killed or widowed in conflicts Clinton’s State Department stirred up: just bathe in the symbolism of a woman in the White House.

Through presenting the election of Hillary as a deeply symbolic, therapeutic affair — which would help make amends for old Western wrongs and score points in the ‘battles for recognition’ — Hillary’s backers sideline substance, the real, the concrete, pesky tangible matters such as record and policy and ideas. Like Moore, they invite Americans to approach the election as a redemptive rather than political affair; as therapy patients rather than citizens; as people who must make a symbolic gesture not a political statement — that is, as a stage army to the symbolic installation of a new-looking commander rather than as political creatures engaging in robust consideration of policy and practice. In this way, through the promotion of the symbol over substance, Hillary’s backers evacuate the election of seriousness and ideas at least as thoroughly as Trump does.

And so, as with all propaganda masquerading as culture, Trumpland contains lies and misinformation. Under Hillary, the State Department mostly ‘did good’ in the world, says Moore. Is he serious? Incredibly, reputation-shreddingly, yes he is. The vacuum of Libya, the spread of instability into Tunisia and Mali and Nigeria, the gaping hole in Iraq and Syria — into the memory hole. Worse, Moore has a pop at Brexiteers, telling us these people, like Trump supporters, used their votes to say ‘Fuck you’ to the elites, and now they regret it so much that four million of them have signed a petition calling for a do-over of the referendum. Another lie. Polls consistently show that infinitesimally small numbers of Brexit voters regret their decision (around three per cent), and the four-million-strong petition was actually signed by pissed-off Remainers, not sad-eyed Brexiteers. But hey, what are facts, what is substance, in the face of the glorious therapy and symbolism of the cult of Hillary?

The irony is too much: the Moore brigade, and Hillary’s backers more broadly, are guilty of the very things they disdain in the plebs. They accuse ‘low information’ voters of eschewing truth and expertise and using their votes to make big, angry statements rather than as considered acts of conscience (Moore says Brexiteers treated their votes as ‘anger-management tools’). But it is they, these Hillary personality cultists, these sideliners of substance for gesture, who bury inconvenient facts, who are spectacularly ‘post-truth’ in relation to Hillary’s record, and who use their votes to make grand statements of self-esteem rather than to express a conviction about the future direction of American society and world affairs. It is they who demean democracy, debate and the idea of citizenship itself, not us.

Watch the trailer for Michael Moore in TrumpLand: