Hillary's server scandal shows she is careless and entitled. 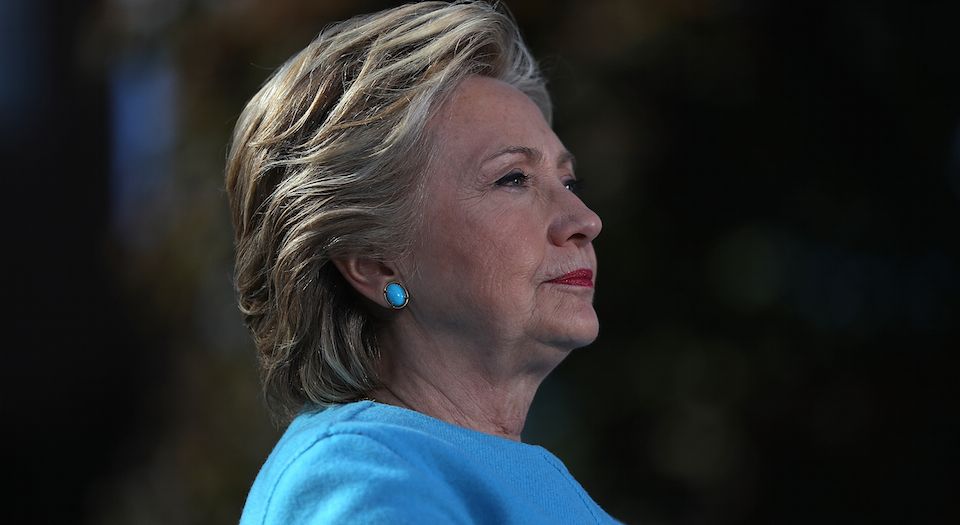 Will FBI director James Comey’s ‘October surprise’, coming so close to the election, swing the vote to Donald Trump? That possibility has certainly got Democrats angry and scrambling in the final days of the campaign.

Last Friday, in a letter to Congress, Comey said the FBI had discovered new emails related to Hillary Clinton’s private email system, found on a laptop belonging to the ex-husband of Clinton’s top aide Huma Abedin. Before this news, Clinton had claimed that the controversy over her emails was a thing of the past, following Comey’s recommendation back in July not to pursue charges. Her campaign assumed it was coasting to victory over Trump. No longer.

Clinton and her Democratic Party allies have now turned their fire on Comey. ‘It’s not just strange. It’s unprecedented, and it is deeply troubling, because voters deserve to get full and complete facts’, said Clinton. Comey’s move is unprecedented, as Clinton says, but so too is her email situation. A secretary of state setting up a private server is unprecedented, as is having a presidential candidate under criminal investigation during a campaign. And it is also strange to hear Clinton espouse the virtues of transparency, in demanding that Comey release the ‘full and complete facts’, when she herself has avoided disclosure, destroying 33,000 emails when found out, and stonewalling investigators all along.

Police arms like the FBI, and other non-partisan institutions, should not directly intervene in politics. That’s why Comey’s announcement is problematic; it will unduly influence the election. But this is not the first time he’s crossed the line in this case – he shouldn’t have given a press conference in July, nor should he have appeared before Congress afterwards. Many Democrats loved that Comey appeared to exonerate Clinton in July, so their objection to his recent announcement is not a principled one against outside interference – they just don’t agree with his judgement this time around.

While Comey has been rightly criticised for breaking with ‘protocol’, it is worth noting that he is not the only one who has done so. Attorney general Loretta Lynch broke with protocol when she met in private with Bill Clinton on a Phoenix airport tarmac while Hillary was under investigation. Lynch would further defy norms by not recusing herself after this meeting, instead deferring to the FBI director as to whether to prosecute Hillary (something that is her responsibility, not his). President Barack Obama also departed from protocol when he said in an interview that Clinton had not ‘endangered’ US national security, before the investigation was completed, seeming to pre-judge it.

Indeed, as the legal experts at the Lawfare blog have argued, a primary reason for Comey’s ‘unusual transparency’ in his July press conference was ‘the public perceptions that the independent judgement of Comey’s superiors, the president and the attorney general, was tainted on the matter’. Comey’s decision to break with norms and speak up at that time ‘was the least bad option he had for preserving the integrity and independence of his investigation and recommendation’.

The July press conference set off a chain reaction: Comey felt obliged to testify before Congress to explain himself, and, when pressed at the hearing, he promised to inform members if new evidence emerged. Then, with the latest laptop discoveries, he felt he must keep his promise to Congress. Once the spout had been turned on, it became hard to turn off.

Moreover, Comey claimed that keeping quiet would have had a worse effect on political life, as it would have emerged after the election (if not sooner, via a leak), and he might have been viewed as conspiring to shield Clinton. I believe Comey made the wrong call, but there is no reason to accuse him, as some Democrats have, of acting in bad faith or conspiring to throw the election. For instance, Charles Blow, op-ed writer for the New York Times, writes: ‘This election isn’t in danger of being stolen by Hillary Clinton, but in danger of being stolen from her.’ It seems that while Trump’s talk of election-rigging is a danger to Western civilisation, liberals’ warnings of rigged votes are entirely legitimate.

We’ve seen a worrying trend in the US and elsewhere for politicians to turn to the police and the courts, asking them to sort out what should be political matters. In the recent debate with Trump, Clinton herself said her choice for Supreme Court judge would be based on sharing her political views, rather than the traditional criteria of applying the law impartially. Republicans and Democrats alike are willing to take legal action against their opponents. The real lesson of Comey’s ‘October surprise’ is that, once politicians invite the police and the courts to intervene and become arbiters of political life, they lose control of the process and erode proper boundaries. You can’t cheer on Comey in July for speaking up and helping your case, and then expect him to shut up afterwards.

What makes Comey’s intervention particularly galling for some Democrats is that, in their view, he is casting a cloud over Clinton even though her emails are really a non-issue. This renewed focus on Hillary’s emails thus poses a broader question: did she do anything wrong, and should her email practices matter?

Many liberals are dismissive. All political figures, including former secretary of state Colin Powell, have used private servers, they claim. The issue is just a Republican witch-hunt, the latest example of ‘Clinton derangement syndrome’, they say. Richard Wolffe, writing in the Guardian, waves away the accusations against the Clintons as nothing more than ‘pseudo-scandals’, with no defence required. According to Berkeley professor Robin Lakoff, writing in Time magazine, Hillary’s emailgate is ‘an attack on women’. ‘The only reason the whole email flap has legs is because the candidate is female.’

But Clinton’s handling of her emails is a problem – a political problem, not just a personal flaw. Her conduct has been less than what should be expected from a public official. As a reminder, note that Clinton set up an entire server to conduct all correspondence away from official channels, which is on a much larger scale than using a personal iPhone for the occasional message. As the FBI found, she handled classified information. Being a non-secure system, her emails were almost certainly hacked, thus releasing national-intelligence secrets. She proceeded to destroy emails, after receiving a congressional subpoena for them. Her aides smashed her phones and laptops with hammers. A number of statements she made in her defence have been proven false, including the famous one that her emails were mainly about yoga and her daughter Chelsea’s wedding.

Clinton has been cleared of criminal wrongdoing, her fans say, and that’s true (of course, evidence in the latest laptop findings could change that). But that doesn’t exonerate her from the court of public opinion. Even though it was not his place to say it, Comey was right when he called Clinton ‘extremely reckless’. Intentional criminal activity is too low a bar for a politician. We should expect honesty, ethics and integrity from those who claim to represent us. Behaviour can fall short of breaking the law and still be disqualifying for public office.

Polls show that over 60 per cent of US citizens find Clinton untrustworthy and dishonest. This isn’t simply due to Republican propaganda – there is an underlying problem with Clinton, and her emails are part of that problem. Of course, Republicans have, and will, undertake partisan attacks on Clinton, including pressing the email issue for political advantage. But it is notable that they haven’t been able to pursue scandals with Obama, which they surely would if they could. Clinton gives them lots of material to work with, while Obama doesn’t.

In public, Clinton’s campaign staff play down Clinton’s email issue. But, as recent Wikileaks revelations show, in private they recognise the seriousness of the situation. Neera Tanden, who runs the Clinton campaign transition team, wrote: ‘Do we actually know who told Hillary she could use a private email? And has that person been drawn and quartered? Like [the] whole thing is fucking insane.’ Clinton’s adviser Cheryl Mills recognised it was a big problem when she wrote to John Podesta, Clinton’s campaign chairman, saying: ‘We need to clean this up.’ Mills was referring to the fact that Obama had been corresponding with Clinton on her private system (‘he has emails from her – they do not say state.gov’).

Seeing Clinton’s supporters, including her two-faced campaign staffers, so easily excuse her actions only encourages cynicism about politics. As Amy Davidson rightly argued in the New Yorker : ‘For Clinton’s defenders to say that all this is just politics as usual is to explain why so many Americans distrust politicians.’ It also is clear that Trump feeds off of disenchantment with establishment politicians. He is demagogue who writes off all politicians as corrupt (‘drain the swamp!’) and who over-reaches like a third-world dictator when he threatens to put Clinton in jail (‘lock her up!’). But Clinton’s email mess gives Trump too much ammunition. As Jonathan Tobin points out, Clinton may ‘keep Trumpism alive’ after the election. ‘The further the nation is drawn into the maze of Clinton’s legal troubles, the more likely it is that the anti-establishment fervour that nominated Trump will continue to permeate the country’s political culture.’

There are much bigger issues facing the US than Hillary’s emails. It bothers me that the entire election campaign has avoided discussing topics of political substance, like the economy and social issues, and that the resurrection of her email issue will provide another reason to avoid tackling those key subjects. And, as it happens, on my list of disagreements with Clinton, the email issue would be far down – certainly below the destruction she has brought to Iraq and Libya, and the warmongering she threatens in Syria and against Russia.

It is unfortunate that the contest has become more about Clinton’s emails than issues of greater importance, but the blame for that lies with Clinton, not her critics. The Democratic Party elites who ruthlessly ensured she won the nomination, and the Democratic politicians who refused to stand up to her, when they knew she came with tremendous baggage, are also responsible.

I get it that many are opposed to Trump, and see him as a greater evil. But stop dismissing her email problems and making excuses for her. We deserve better than Hillary.