What the global clown panic tells us about the politics of fear. 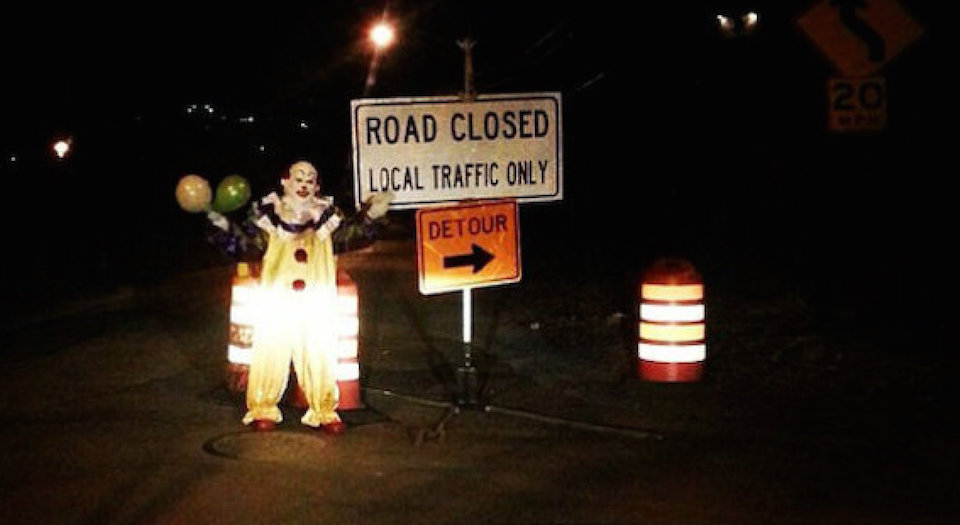 In a matter of weeks, the scary-clown craze has made its presence felt across the Anglo-American world. It began in smalltown America, where supposed sightings of a few clowns turned into a social-media-driven urban legend about vicious clowns chasing people with machetes and knives.

What’s remarkable about the clown craze is the speed with which it came to be globalised. By the start of this month, unsubstantiated stories of creepy clowns preying on people were being treated as hard facts by sections of the media. This was just weeks after the first report of clowns threatening people, which circulated through the media in late August, following an alleged incident in South Carolina. There soon came reports of clowns trying to entice children into the woods. The image of dangerous clowns preying on children caught the public imagination, and soon similar incidents were being reported across the US.

Thanks to the power of social media, rumours of scary clowns then spread around the world. Soon there were sightings in Canada, Australia and Britain. Urban legends can often provoke the most irrational of responses. Such legends are usually based on secondhand accounts. Typically, they are stories that someone heard from a friend, or from a friend of a friend. Historically, this internalisation of secondhand stories has led to phantom menaces being perceived as real and imminent threats to community life. The panics about the Satanic ritual abuse of children in the 1980s is a very good example of the ease with which absurd fantasies can acquire the status of hard fact among sections of the media and the public.

What distinguishes today’s clown craze from previous scary urban legends is the central role played by social media. Social media have intensified the speed at which rumours can circulate and can allow them to reach a far larger audience than could ever be achieved by rumours spread by word of mouth or even newspapers and radio. What’s even more important about social media is that they allow pretty much anyone to become, or to imagine they could become, part of the story.

By late August and early September, groups of individuals had launched Facebook pages providing information about clowns. Others posted or shared videos allegedly showing frightening incidents involving a crazed clown. Others published pictures of themselves in clown gear to gain attention and provoke a reaction. Still others decided to become part of the story by actually becoming one of the crazy clowns, donning a mask to try to rattle members of the public. In some instances, young teenagers tried to become players in the legend by putting on a clown mask to scare a few of their friends. Thanks to the internet, what started as an urban legend soon became the means through which individuals could act out their desire to gain some attention for themselves.

What is truly fascinating about the clown craze is the reaction it has provoked. By the start of this month, there were reports about mobs of people going out to hunt down clowns. On 3 October, hundreds of students roamed around the campus of Pennsylvania State University on the lookout for clowns. This mass clown hunt seemed to combine the lighthearted group dynamic of Pokémon GO with the menacing character of a lynch mob.

Clown-hunting soon spread via social media to Australia. A group of clown-hunters in Adelaide launched a ‘Clown Purge’ Facebook page. Then someone set up a ‘Brisbane: The Clowns are Coming’ page. England was not far behind: a group in Bristol calling itself ‘Clown Hunters’ set up a Facebook page calling for volunteers to help patrol the streets.

Almost spontaneously, the clown craze became meshed with the prevailing fear of terrorism. One Ohio school district declared a ban on clown costumes and other ‘symbols of terror’. This panic-like reaction has had the perverse effect of encouraging pranksters to have a go. They know the impact they can make on social media, and even globally. Over-the-top responses fuel incidents. One Massachusetts college and numerous schools in the US and the UK have gone into temporary lockdowns in response to clown hoaxes. At Brunel University, a ‘killer clown’ did not kill or even touch anyone; nevertheless he managed to spark a panic on campus. Some websites even provide maps of sightings to help people deal with the ‘fear of clowns’ which has now reached ‘an all-time high’. The supposed threat posed by rampaging clowns has even made its way to the White House, where press secretary Josh Earnest has been asked to comment on it.

Putting the clownpocalypse in perspective

Fear of clowns is often labelled ‘coulrophobia’. As with most phobias, it expresses both a psychological disposition and cultural attitudes. What concerns some people about clowns is the question of what lies behind the mask. A mask or a painted face with a fixed grin highlights the tensions between the appearance of a person and the reality of that person. Some people find it disconcerting not to be able to see the facial expressions and emotions of the people they encounter. The impenetrable mask invites some to ask, ‘Are they really smiling at me, or sneering at me?’. Consequently, some individuals experience clowns as people whose actions and behaviour are unpredictable, and potentially threatening.

Clowns are rarely perceived as threatening in their natural habitat — that is, in the middle of a circus or on a stage entertaining children. It is the appearance of clowns in mundane everyday situations that can provoke a sense of unease. Clowns outside of their usual habitat are perceived as being out of place; they suddenly appear menacing. In such circumstances people can feel uncomfortable with individuals wearing masks.

Since Hollywood started making horror films featuring crazed clowns, clowns have come to personify not just fun but also evil in the pop-culture imagination. In recent decades, the association of clowns with horror has gained a fair bit of cultural influence. This means that a picture of a funny clown can very easily mutate into an image of malevolence.

However, it is important that we don’t think of coulrophobia as the cause of the current panic. Rather, today the creepy clown provides a striking symbol of the unpredictable and random threats that people fear in contemporary society more broadly. This is why the image of the fearful clown has been effortlessly internalised by social media and has made a large impact in many parts of the Anglo-American world: because it speaks to an already existing sense of unease in society.

Most individuals participating in the clown craze are not being malevolent. They’re simply driven by a narcissistic impulse to draw attention to themselves. However, one of the unintended consequences of their behaviour is to provide another focus through which society’s sense of insecurity can become more pronounced and more visual. The circulation of clown images is the less violent, Western secular equivalent of the performance of beheadings in jihadists videos. The creepy clown out to scare children shares the same terrain of evil as the paedophile — it gains its menacing force through harnessing the pre-existing anxieties of modern society.

Arguably, the real problem is not the creepy clown. There are very, very few incidents of violence by clowns. The real problem is how we respond to this and other panics. Mobs of clown-hunters are far more dangerous than the odd sad individual who stands in the park in a mask. If we ignore these clowns, they will go away. But if we take them too seriously and overreact, and turn a handful of sightings into a global urban legend, then we can expect more scary rumours to circulate on social media soon.

Frank Furedi is a sociologist and commentator. His new book, What’s Happened To The University: A Sociological Exploration of its Infantilisation, will be published by Routledge on 17 October.