In defence of jury service

In an age beholden to experts, jury service reminds us of the importance of common sense. 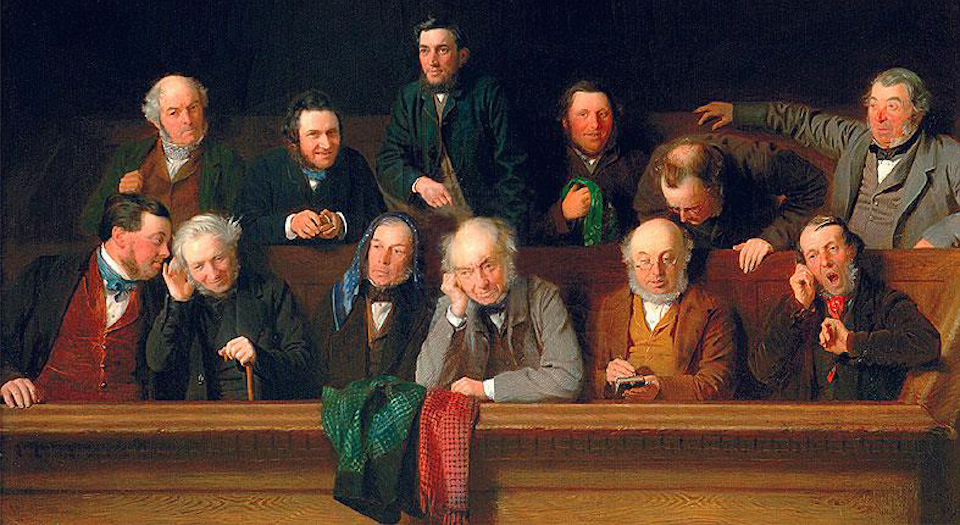 Upon opening the letter that announces one has been summoned for jury service, people react with various emotions: surprise, excitement, intrigue, apprehension. However, I imagine that the first instinct among most is simply: ‘How can I get out of this?’ Jury service has always represented a distraction in most people’s minds – a potential two-week ordeal or bore-fest. You hear many urban tales of how to avoid jury service these days. Apparently, the most successful method is to declare yourself an incurable racist, incapable of making impartial judgements. Back in the 1970s, urban legend had it that the best way for a defence lawyer to have you disqualified was for you to turn up with a copy of the Daily Telegraph, braying: ‘If you ask me, there isn’t enough law and order in this country.’

Having completed my jury service this week, I can confirm that it is indeed boring for the most part. As soldiers say of warfare, it’s the constant waiting around – in the case of the juror, being stuck in the jurors’ room awaiting the call. This room is a cross between the bar on a ferry, an airport lounge, a doctor’s surgery and the ward from One Flew Over The Cuckoo’s Nest. It’s a place where you gradually bond with your fellow jurors, complain about the wait, leaf through copies of National Geographic, and where grown men engage in jigsaw puzzles with tongues protruding from the side of their mouths.

The act of jury service itself, when it finally came, was everything I expected – superficially. We all assumed a serious disposition, took oaths or affirmations, sat in front of a judge and the counsel all wore wigs. The accused sat in the dock behind Perspex. Nothing seemed out of place or disconcerting. The wigs weren’t offputting: they lent authority to figures who commanded it because they had earned it. All that was really missing was that no one said ‘m’lud’ or cried ‘objection!’.

I was among 11 people, of various age, background, ethnicity, temperament and intelligence, yet here we were as absolute equals. This sensation I hadn’t expected. Despite all of us being so different, for the first time in my life, I didn’t feel superior or inferior to any of my fellow citizens. We were all in the same boat.

I have read that 12 ordinary, reasonable people are more likely to make a rational and just decision in such scenarios than a couple of experts or a learned committee. This theory made itself abundantly manifest as we went to deliberate. We were told by the judge the importance of using common sense. In an age in which we are prone to place so much responsibility in the hands of experts, or in which some still question the whole idea of rational, impartial knowledge itself, it was refreshing to see how judgements are reached through common sense. We went over and weighed the evidence, we talked about probabilities, we endeavoured to the best of our capacity to seek the truth.

This is how truth is created: through negotiation, debate and evidence, all at the behest of imperfect human beings who strive for objectivity. Empiricists have always accepted it thus. I recommend jury service highly for anyone who thinks truth is a conceit or a mere point of view. Jury service reminds us that life-changing truth is arrived at by subjective agents who seek it, but is no less real for that. It’s a reminder, too, that common sense transcends social boundaries.

The Times at the weekend reported that tourists in Venice are being urged to leave by locals who are fed up with selfie-snapping visitors clogging alleys and jumping into canals. Posters have been put up saying: ‘Tourists go away! You are destroying this area!’ In Spain, meanwhile, the Catalan-language newspaper Ara reports that 51 per cent of tourists visiting Barcelona think there are too many tourists in Barcelona. This bizarre statistic will come as no surprise to residents of the city. Complaining about noise has become something of a pastime for Barcelonans.

This trouble has been brewing in Europe for sometime. Tourists have always been a blight on London. I expect it’s got even worse now that, since 2012, the city has basically become the capital of the world. Amsterdam has long been over-run by those attracted to its reputation for drugs and prostitutes. Prague has been but the most recent victim of tourist overkill. And honestly, why does anyone bother to go to any Italian city any more, when there hardly seems to be any Italians there?

Venice’s population has dropped from 174,000 in 1951 to 55,000 today &#8211 the city has become a place to visit or stay temporarily, rather than to live. There’s a warning for London here, another city where locals are gradually being shoved out. London is in danger of becoming another city heading for museum status (outside the economic hub), where the pubs in Chelsea don’t even open at the weekends anymore because no one actually lives there.

Forget ‘hordes’ of illegal immigrants. It’s the tourists and transient people who never settle down who we must be wary of: like locusts, they devour all they seek, and leave the place a desert when they are satiated.

The Australian prime minister Malcolm Turnbull has been multiply hounded after being spotted giving five dollars to a Melbourne beggar. Some have accused the wealthy politician of being tightfisted for making an offering equivalent to a mere three pounds – the Australian Daily Mail has dubbed him ‘Miserly Mal’. Some have attacked the alms-giving itself – Melbourne’s mayor Robert Doyle said that giving to beggars helps feed drug habits and entrenches poverty. Others have deemed his act a cynical ploy, designed to convey Turnbull’s kindly and benevolent side.

There are some situations in which you can’t win, especially if you are a politician. Had Turnbull breezed past the mendicant he would have been accused of heartlessness. Had he merely talked to the vagrant, he would have faced charges of playing to the cameras. It was an impossible dilemma. As Nietzsche said: ‘Beggars ought to be abolished: for one is vexed at giving to them and vexed at not giving to them.’