The problem with Black Lives Matter

Radicals once challenged racial thinking — now they embrace it. 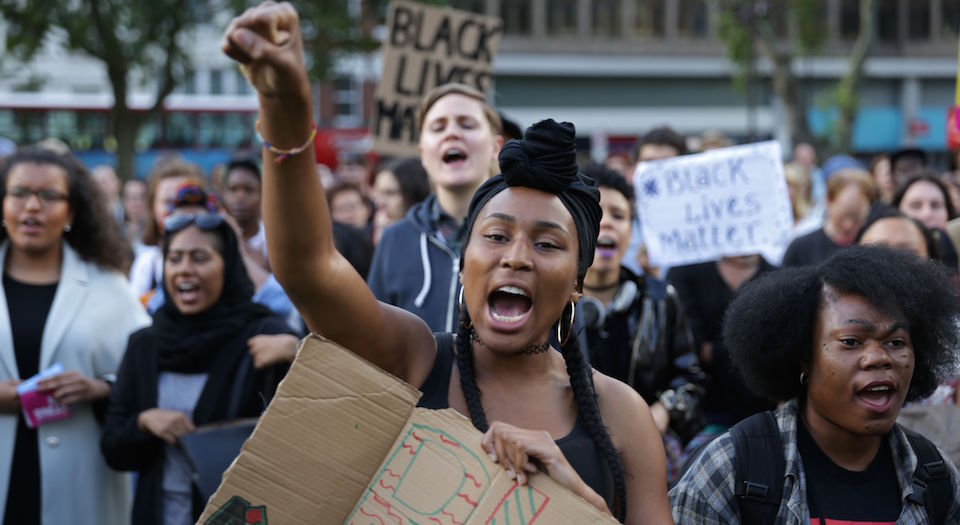 White self-loathing and black self-pity: these seem to be the only two options in radical politics these days. On one side stand white liberals, white radical students, white writers, beating themselves up over their skin colour and the ‘privilege’ it apparently grants them. ‘Our whiteness is… the colour of shame’, as the playwright Eve Ensler says. And on the other side stand black activists, black Oxford students, black writers, presenting themselves as the damaged goods of history, beat up by past events, traumatised by white privilege, and in urgent need of recognition of their pain. What both sides share in common is a depressing, fatalistic attachment to racial thinking, to the racial imagination, and a commitment to the therapeutic project of expelling inner demons (whites) or demanding validation of one’s suffering (blacks). Radicals once rejected the category of race; now they embrace it, and expand it.

The new racialism, this danse macabre between white self-loathing and black self-pity, is best embodied in Black Lives Matter. Starting life in the US as a protest movement against police shootings of black citizens, BLM has now come to Britain, where its backward views have become clearer. It announced its arrival by blocking the motorway to Heathrow. It is not remotely a grassroots campaign — its protests attract tiny numbers of people — but rather is an offshoot of the middle-class politics of the Safe Space and offence-taking that has taken hold on campuses in recent years. Its key UK spokespeople are a postgraduate geography student and a ‘black, British, queer, non-binary Muslim’ who goes by the pronoun ‘they’. These people are about as representative of the black British experience as Princess Anne is of the white British experience. Their claim to speak on behalf of all British black people by virtue of the fact that they have the same colour skin speaks volumes about the innate racialism of the politics of identity and its active suppression of difficult, divisive questions of class and experience.

The most notable thing about BLM, especially in its UK form, is how it detracts from the radical anti-racist politics of old in two profound ways: first, through promoting a view of black people as vulnerable and requiring, in essence, social therapy; and secondly, by creating, and even celebrating, racial division rather than seeking to overcome it. BLM UK, taking its cue from the raised-hands politics of victimhood pursued by BLM US, exaggerates the plight of blacks in Britain. It describes their lives as being in ‘crisis’, which the average black person is unlikely to recognise. And it promotes itself as a kind of therapeutic balm to the black masses’ alleged mental turmoil. ‘A lot of people have lost their voice, they feel powerless’, said one of BLM UK’s founders. ‘We want to give them their voice back.’ Another founder says BLM showed him ‘that my life mattered’. Where earlier anti-racist movements emphasised the capacity of black people — to run their own lives, to do politics, to live as autonomously as whites — middle-class BLM leaders talk up their powerlessness, their feeling of vulnerability, and their psychological need for a movement that can speak for them and prove to them that they’re valuable. This is therapy, not politics; and it’s highly elitist.

And where earlier radicals sought to overcome the ideology of race, BLM and its supporters — including its white supporters — wallow in racial thinking. BLM views everything through a racialised prism and openly encourages people to stay within their racial categories. BLM UK says it welcomes ‘white allies’ but warns them to ‘acknowledge your privilege’. ‘Don’t dilute’, it says. In the US, BLM has segregated some of its marches, making white people march in the background and forbidding them from speaking to the media. And at some press conferences it has segregated black and white journalists. As one report says, BLM has taken to ‘splitting up white and black members of the press’, and giving priority to black reporters. A whole new lexicography has been developed to promote this supposedly radical new segregation. ‘Check your privilege’, ‘Stay in your lane’, ‘Don’t “whitesplain” racism to me’: these are the fashionable terms of the politics of identity, which essentially say that solidarity across races is impossible because whites haven’t experienced what blacks have.

Far from challenging racial thinking, BLM UK demands we approach the world with a highly racialised mindset, that we think of people as black or white and engage with them accordingly. It explicitly eschews Martin Luther King’s dream of people being judged by their character rather than their colour because, as one of its public supporters has written previously, blacks and whites come at the world from ‘completely different planes’, meaning there is a ‘gulf of emotional disconnect’. Of course, BLM did not create this new racialism, this ‘stay in your lane’ radical politics that says we can never really understand, far less fight alongside, people of different colours. Rather, it merely embodies the now mainstream and destructive politics of identity, which has so thoroughly elevated group loyalty over universalism, and narrow individual experience over the humanist ideal of working out what we share in common and how we might achieve it, that it has made solidarity all but impossible. BLM presents itself as an edgy, independent movement, but in truth it is best understood as the militant wing of the elitist politics of identity now promoted everywhere from the academy to the political realm.

But it would be wrong to see BLM as the latest manifestation of the post-King black nationalism of groups like the Black Panthers. This has been the response of many on the right to the BLM phenomenon: to brand them ‘black supremacists’ and talk about them as a dangerous new Panther phenomenon. But those old black nationalists emphasised the power of blacks, as symbolised by their desire for guns, whereas BLM emphasises their existential vulnerability, as symbolised in their raised-hand gesture and their slogan ‘Don’t shoot’. Where black nationalists rejected white society, largely out of frustration at the failure of civil-rights legislation to improve ordinary black people’s lives, BLM is strangely reliant on white society, particularly on the white cultural elite: it needs this constituency’s white self-loathing to validate its claims that blacks are damaged by white privilege, white history and by what one BLM UK supporter calls a ‘politics of race that operates on its inherent invisibility’. Where black nationalists demanded respect for their rights, BLM calls for official recognition of their pain, making them ironically beholden to mainstream (white) society and its therapeutic machinery.

The return of the racial imagination ultimately speaks to the withering of the radical social imagination. As radicals, leftists and liberals have turned away from the politics of real, meaningful social change in favour of the politics of identity, in favour of managing society and its inhabitants rather than transforming society, so group thinking has returned and divisions have intensified. We are no longer individuals with common interests we might fight for together; rather, we’re unbridgeable racial creatures who must always acknowledge the ‘gulfs’ that divide us. If we’re black we must agree that we’ve been damaged by history, and if we’re white we must always check our privilege — that is, self-flagellate for the crimes of history. The rise of BLM really speaks to how the politics of identity violently forces us all back into the racial boxes that men and women struggled so hard to escape; how it has replaced the old racist idea that biology determines our fate with the new, nasty idea that it is history that shapes our characters and outlooks. The old racists made mankind prisoners of biology; the new racialists make us slaves to history.

Worse, this new politics rehabilitates paternalistic views of black people. Just look at how many white thinkers and writers self-consciously refuse to criticise or even question BLM, because this would apparently be ‘whitesplaining’. They think they’re being progressive, but really they’re infantilising black activists by refusing to subject their ideas and behaviour to the critical scrutiny that white radicals could expect.