Why we protested at Theresa May’s first speech

This is about more than Brexit – it’s about democracy itself. 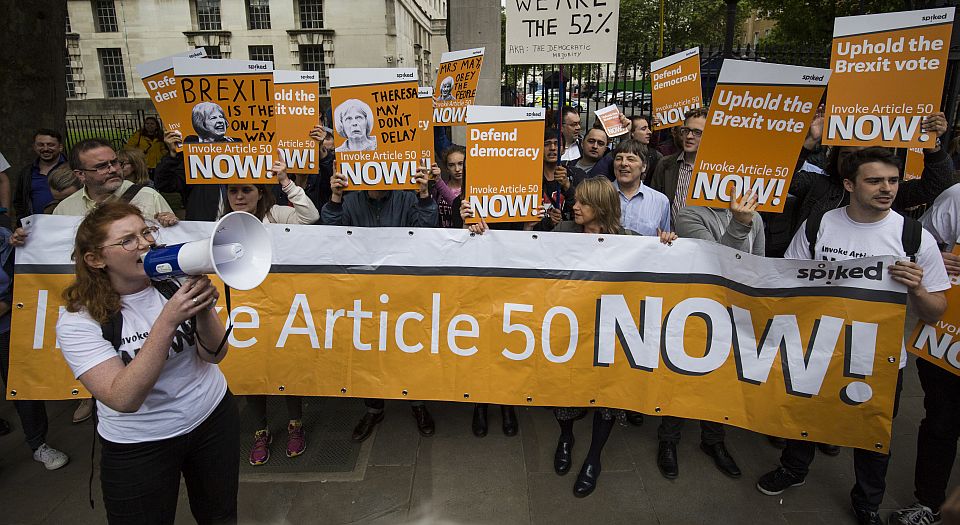 In her first speech as prime minister, in Downing Street last night, Theresa May talked about bringing the country together, about David Cameron’s ‘one nation’ government and how she intended to carry on that legacy. But for all the talk of unity, the sound of discord was blasting from the near distance. And it made May’s reheated Tory-reformer sentiments ring all the more hollow. That sound was us, spiked’s Invoke Article 50 NOW! campaign, protesting against May from Whitehall, across the road from the gates of Downing Street. Our chant – ‘What do we want? Brexit! When do we want it? Now!’ – is what you can hear over May’s performance.

We’re demanding action. The Brexit vote must be upheld, and that means invoking Article 50 immediately. May, the Remainer now charged with leading Britain out of the EU, has said repeatedly that we must wait – until the end of the year, at least. She assures us that Brexit is a long, complicated process, and that we need to box clever. Her Brexiteer cabinet picks – Boris Johnson, foreign secretary; Liam Fox, international trade secretary; David Davis, Brexit secretary – are clearly intended to assuage fears of a fudge. But a few canny appointments and calls for calm are not good enough.

The Brexit negotiations will of course be complex. European trade is crucial to the British economy. Business and the markets are crying out for stability. And we’ll be dealing with a spurned bureaucracy, desperate to hold itself together and send a message to Eurosceptic publics across Europe. But this is no reason for delay. Putting off invoking Article 50 doesn’t strengthen our hand – it shows a failure of nerve. And the appeal to pragmatism, though typical of a technocrat like May, is an invitation to compromise. She may insist that ‘Brexit means Brexit’, but given there could be so many different kinds of Brexit, this is no assurance.

Our picket outside Mischon De Reya

History shows us that attempts to cool the public, to delay democratic action, always lead to fudges, compromises, backtracking. That’s why, now more than ever, the public must hold the government to account. For those of us who voted Leave, and those who didn’t but who believe in democracy, the Brexit vote must be acted upon now. And we cannot rely on the elite to deliver it to us. Even prominent, principled Leavers, Davis among them, are insisting we bide our time, and possibly bring on board leading Remainers’ concerns. This is where the public must step in. Without real public pressure, the elite naturally slips into pragmatism. In these potentially exhilarating, transformative times for democratic politics, we cannot allow this to happen.

Our Invoke Article 50 NOW! campaign is about grasping the huge but already dwindling opportunity we’ve been presented with. In the past two weeks alone our campaign has picketed the London offices of Mishcon De Reya, the law firm formulating a legal challenge to the triggering of Article 50. We staged a counter-picnic for democracy in Green Park, setting up in the middle of a ‘Picnic Against Brexit’. And, last night, we gathered outside Downing Street to insist that our new PM respect the people’s will, gaining coverage in the Guardian, the Mail, and on Channel 4 News.

In the weeks ahead, Invoke Article 50 NOW! wants to raise the stakes. We will continue to demand that the government act on Brexit, and face off those who are determined to subvert the vote. But we also want to push the argument for democracy further. The European referendum was a democratic reawakening. After decades of technocratic rule, the demos is fighting back. We can’t allow political-class pragmatism to chill our passions. This is not just about defending Brexit – it’s about making the public’s presence felt in politics. This is an historic opportunity. We must seize it.

Tom Slater is deputy editor at spiked and convenor of Invoke Article 50 NOW!.