After Dallas: let’s move beyond grief and fear

The US needs to rediscover its universalist outlook. 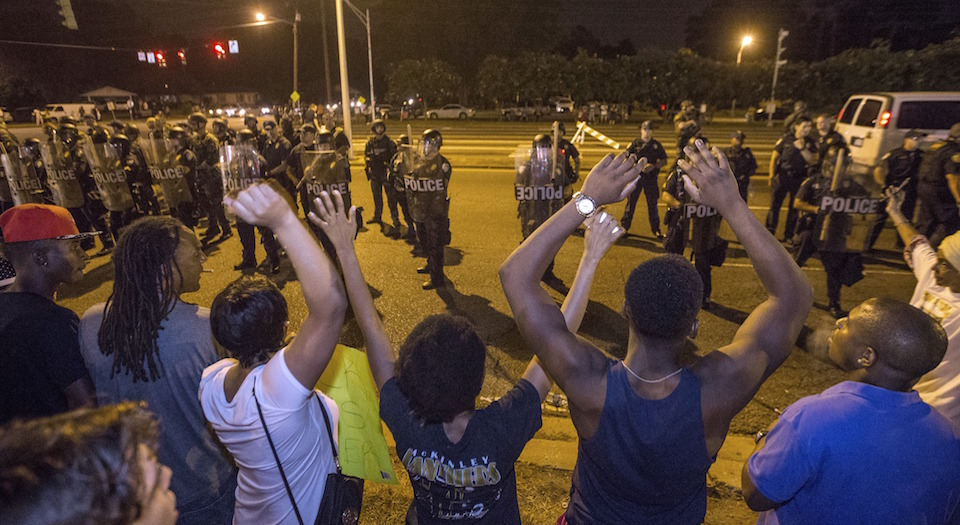 These are grim and sobering times for the US. On back-to-back days last week, two videos emerged showing police officers shooting black men – Alton Sterling in Louisiana and Philando Castile in Minnesota – apparently without provocation. A day later, Micah Johnson, a black former soldier, gunned down police at a demonstration in Dallas, killing five officers. During the standoff with police, Johnson said he was upset about the police shootings, and ‘wanted to kill white people, especially white officers’.

The shootings of Sterling and Castile were only the latest high-profile cases of police seemingly executing black men on the spot, and led many to wonder if this horrible parade of killings will ever end. Johnson’s attack raised the stakes further, raising the possibility of more retaliatory attacks and a new spiral of violence.

As President Obama said at the memorial service on Tuesday for the slain Dallas police officers: ‘Faced with this violence, we wonder if the divides of race in America can ever be bridged… I understand how Americans are feeling. But, Dallas, I’m here to say that we must reject such despair. I’m here to insist that we are not as divided as we seem.’

Obama is right. The US is not in the midst of a ‘CIVIL WAR’, as the cover of the New York Post screamed. The demonstration in Dallas that Johnson fired down on was peaceful, with protesters taking cheerful photos with police on the day, according to some reports. As far as we know, Johnson acted alone, and there hasn’t been a spate of similar attacks. Instead, America has been largely united, with the vast majority of Americans agreeing that the events in Louisiana, Minnesota and Dallas were horrific, and that they don’t want this to spin out of control.

The US is not in the grip of an apocalyptic race war. Looking back over our history, we have seen far worse. But while such facts provide some context, they are little consolation in the here and now. There’s no avoiding that there are real and important divisions in US society today, which have grown worse in recent years. People know that there is a problem. According to a poll published yesterday, nearly 70 per cent of Americans say race relations are bad – the highest figure since the aftermath of the LA riots.

Over the past couple of years, as videos have emerged and tensions have flared, many have called for a national discussion about race relations. And, after Dallas, we now hear more calls. But, as it happens, the US has been talking quite a lot about race for some time now. The problem is not the amount of talk – it’s the level of discussion. Too often, there is an unwillingness to engage with facts that don’t fit simple narratives. Worse still, the aftermath of Dallas has exposed how sweeping generalisations and shutting down speech are barriers to greater understanding and progress on this issue.

For a start, look at how some on the right sought to pin the blame for Johnson’s barrage on the Black Lives Matter (BLM) movement. The Fort Worth Police Officers Association in Texas called BLM activists murderers, while Rush Limbaugh and others called BLM a ‘terrorist’ organisation. In its defence, BLM denounced Johnson, tweeting: ‘#BlackLivesMatter advocates dignity, justice and freedom. Not murder.’ Of course, BLM was not responsible – Johnson was a lone-wolf attacker. The attempt to tie BLM to the crime was a cheap attempt to tarnish it by association.

From the other side, there were claims that Johnson’s attack was ultimately the fault of the police, in a kind of ‘chickens coming home to roost’ fashion. In the Atlantic, Ta-Nehisi Coates writes: ‘A community consistently subjected to violent discrimination under the law will lose respect for it, and act beyond it. When such actions stretch to mass murder it is horrific. But it is also predictable.’ If you believe Coates, Johnson’s onslaught was like night following day. But it’s ridiculous to suggest that a long history of police treating black people harshly (indeed, Coates thinks little has changed since the country’s founding) is the root cause of a mass shooting by a lone gunman. And, in posing it this way, Coates effectively argues that Johnson is expressing the sentiments of ‘the community’, even though most African-Americans have no sympathy for him.

The discussion after Dallas showed how wrong it is to make broad claims about what ‘inspires’ violent attacks. Just as it isn’t right to lay the blame for the killing of 49 gay people in Orlando on either ISIS (as some conservatives did) or Americans who don’t agree with same-sex marriage (as some liberals did), it isn’t right to say that BLM or the police inspired Johnson to kill.

Over-heated rhetoric doesn’t help us understand today’s race issues, either. As Matt Welch notes, both sides indulge in it: ‘So we have “the war on cops” (the title of a new Heather MacDonald book), even though fewer officers were fatally shot in 2015 than in all but two years over the past decade. And we have a “war on people of colour” (as Beyonce declared this week on her website) even though the number of citizens shot by police has plummeted since the early 1970s.’

We need to get to grips with these police shootings. But, right now, there is just a lot of posing and shouting past one another. In response to the uproar over police shootings, conservatives, like former New York mayor Rudy Giuliani, like to switch the discussion to ‘black-on-black’ violence, pointing out that young black men are much more likely to die at the hands of one other than at the hands of the police. However true that is, so what? That response does nothing to address the specific concern about police brutality. The police are meant to represent the law, which is why police violence is especially problematic. People, and especially black people, are right to be concerned about the spate of police shootings that we’ve seen lately.

Moreover, when Giuliani calls BLM an ‘inherently racist’ movement, he is not helping. Yes, it is problematic that many BLM supporters seem to promote a separatist outlook, in contrast to the universalism of the civil-rights movement of the 1960s. But Giuliani’s ‘racist’ claim sounds like he just wants to shut BLM up, in the hope that the issue will disappear. His view is the flipside to those who see white America as irredeemably racist, and likewise want to shut down debate.

Unlike Giuliani, BLM activists want to keep the issue of police shootings in the limelight. But they share with him an aversion to looking at the specifics. There has been a desire to latch on to every video as proof of a wider problem. While, in some cases, (Walter Scott and Laquan McDonald) the police acted criminally, in others (Michael Brown) they didn’t, and the rush to judgement has undermined wider support for BLM’s cause. Its uncomplicated presentation of the issue doesn’t account for why black police chiefs and black cops have often been behind the shootings of other blacks, or why more whites are shot by the police than blacks (without generating any media coverage). Maybe race is not the only prism through which to understand this issue. Moreover, examples of police brutality do not mean all of society is deeply racist, as BLM activists often suggest.

The truth is we don’t know all that much about the facts behind these shootings. A recent study by Harvard academic Roland Fryer, which appears to be one of the most authoritative, should give both sides pause for thought. Contrary to the media narrative, Fryer found that blacks are less likely than whites to get shot by the police. Fryer, who is African-American, called it ‘the most surprising result of my career’. But he also discovered that blacks were more likely to be victims of non-lethal force, like being stopped or pushed. This corresponds with many blacks’ experiences, and such bias should not be tolerated. But we need to look at the whole picture. Hopefully, recent events will encourage an attempt to understand what is going on in society, and focus on solutions.

There are positive signs that people are uniting after Dallas. The back-to-back way the shootings unfolded was shocking, and has led many to call for the violence to halt before it spins out of control. In that reaction, we glimpsed the fact that we are in it together, that our humanity is shared. For a moment, universalism reigned: there were few of the particularist claims we’ve heard before, such as the idea that only blacks can empathise with black pain, or that white police are especially put upon.

To move beyond grief and fear about race, the country needs to rediscover shared values, and a universalist outlook. That is far easier said than done. But it starts with us challenging each other to raise the level of discussion.