After Brexit: the myth of post-truth politics

Remain has become a religion, whose Truth we must not deny. 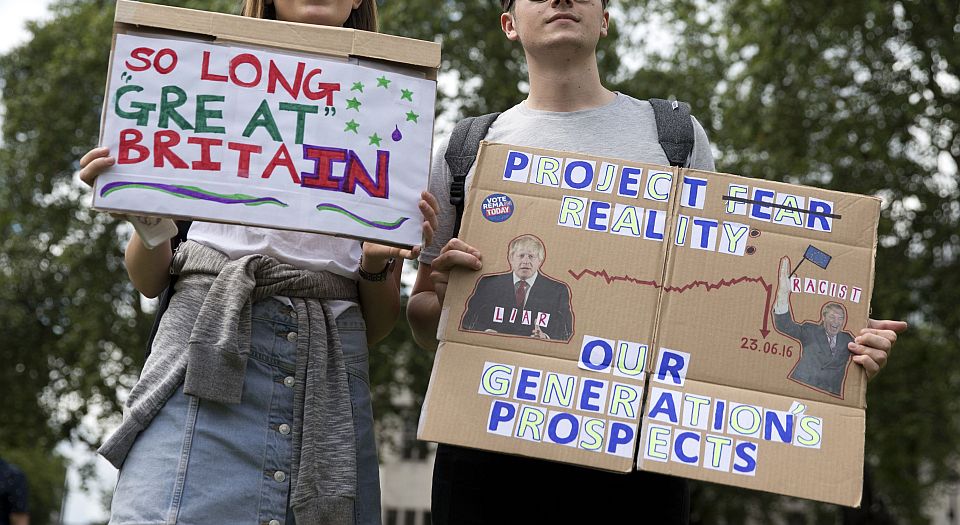 The bruised British elites, still reeling from Brexit, have come up with an explanation for why the masses defied their diktat and voted out of the EU. It’s because we’re in thrall to something called ‘post-truth politics’. We fell for the shiny, colourful demagoguery of the likes of Nigel Farage and Boris Johnson. We were sucked in by their lies. Our minds a blur of misinformation, we voted in a way that went against our own best interests. Our mythical ‘sense of injustice’, our childish feeling that the establishment and the EU don’t like us, proved ‘far greater than the sum of the facts’, says a writer for the Guardian. And so we followed, sheep-like, a political campaign that was ‘riven with lies and misrepresentations’, says Foreign Affairs. We live in a ‘volatile world of post-truth politics’.

The speed with which the phrase ‘post-truth politics’ has entered chattering-class parlance is striking. It has become its own truth, and an uncontested one, ironically. The words ‘post-truth’ are repeated like a mantra, applied sweepingly to whole sections of society whose crime is that they don’t hold the same opinions or ideas as the political and cultural elites. Essays are being written about post-truth. No op-ed crying inky tears over the moronic masses’ vote for Brexit is complete without a nod to it. But what does it mean? It’s far from an uncontroversial phrase. In fact it isn’t a useful one. It has a quasi-religious feel, propagating the idea that there is an already existing truth to which We, good people, have access, and which They, bad people, have dared to deny. This is truth as revelation, truth as religion, not a serious, Enlightened take on truth.

The first, most obvious problem with wounded Remainers’ talk of ‘post-truth’ is that, at the basic level of facts, their own take on the EU and Britain and politics in general is riddled with dodgy info. Their assumption is that they have access to truth, to reality, to fact, whereas the other side is beholden to lies. As an essay in the Guardian says, Remainers ‘attempted to fight fantasy with facts, but quickly found that the currency of fact had been badly debased’. In this self-serving fairytale, the Remainer is a brave, evidence-fuelled warrior against the ignorance and duplicity of Leave and its hoodwinked minions. And yet Remain also plays fast and loose with the facts. Consider Remainers’ claim that the Leave vote was ‘propelled by prejudice’. Actually, surveys show that a majority of Leavers voted out because they believe in the ‘principle that decisions about the UK should be taken in the UK’. That is, they believe in democracy.

Or consider the most common cry of angry Remainers: that Leavers are anti-migrant, and possibly racist. In fact, a recent survey found that 84 per cent of Brits think EU nationals must be allowed to stay in Britain post-Brexit. Or think about ‘Regrexit’, the idea that huge numbers of Leave voters regret their apparently stupid decision. This notion has been peddled in loads of Remainer newspaper columns and in the statements of the anti-democrats demanding a second referendum. Yet this, too, is fact-lite. An Ipsos MORI poll found that only three per cent of Leavers regret their vote, while four per cent of Remainers regret theirs. Key planks of Remainers’ post-vote propaganda — that Leave is racist, that Leavers hate migrants, that regret is widespread — have been called into question. It seems it’s okay to be ‘post-truth’ in the service of the greater truth of the EU, of defending this sacred institution.

The second grating thing about the post-truth idea is the way it calls into question the intellectual capacities of ordinary people. Just as the Chartists were told in the 1840s that the working classes could not be trusted to vote because they did not have a ‘ripened wisdom’ and were therefore ‘more exposed than any other class to the vicious ends of faction’, so it’s now asserted that the less well-off have fallen for political myths that proved ‘greater than the sum of facts’. The reactionary anti-Chartist arguments, about the poor being misled by lies, have made a comeback, and are now uttered by liberals and leftists, by those who once posed as pro-people (but will never be able to strike that pose again). The anti-masses ugliness of the post-truth idea was summed up in the words of Richard Dawkins, who said ‘ignoramuses’ should have no say on issues like the EU, because they cannot comprehend ‘highly complex economic and social issues’.

But perhaps the worst thing about the post-truth notion is the way it redefines politics. It makes politics like religion. Remainers, these complainers about post-truth politics, self-consciously elevate their worldview to the level of a transcendental truth. So anyone who criticises them is not simply disagreeing — he’s post-truth, he’s against the truth. This is the cry of the religious, not the political. It was traditionally the man of the cloth who would say there is a truth, existing, indisputable, and our choice is simply to embrace it and be saved or deny it and be damned.

The new elites claim to favour a simple evidence-based approach to politics, but their use of evidence is never neutral. It’s never simply information. It is information gathered in a particular way and then utilised in a particular way for the pursuit of certain political and moral goals. Whether it’s claims about climate change or statements on the EU, what are presented to us as straight-up, incontrovertible statements of fact are really highly moralised approaches to the organisation of society, the question of who rules, matters of economic growth, and so on. Yet in presenting this politics as ‘truth’, the new elites can elevate themselves above the realm of real politics, and shoot down as ‘deniers’ or ‘liars’ anyone who has a different view to theirs. It’s religious, it’s censorious, it’s anti-politics.

Politics is not true. Politics by its very nature is pre-truth. It is the process by which we struggle to discover what is right and wrong, what is good and bad, and what might be true. Through discussion and debate and engagement, ideas are explored, opinions expressed, truths tested. Politics is a search for truth, it is not The Truth. The problem we face today is the suffocation of politics between the relativism of those who say nothing is true and all approaches are equally valid, and therefore what is the point of open debate, and those, like Remainers, who say ‘I am the truth’, I am right, I am the facts, and therefore, once again, what is the point of open debate. Both the postmodern denial of the possibility of truth and the arrogant liberal assumption of truth harm democracy; both the abandonment of the search for truth and the ossification of liberal opinion as truth damage free debate. They harm suffrage itself, and the ongoing, Enlightened struggle to discover through engagement what is true.