The post-Brexit ugliness of the left

Money-obsessed and anti-working class – the liberal left has revealed its ugly side. 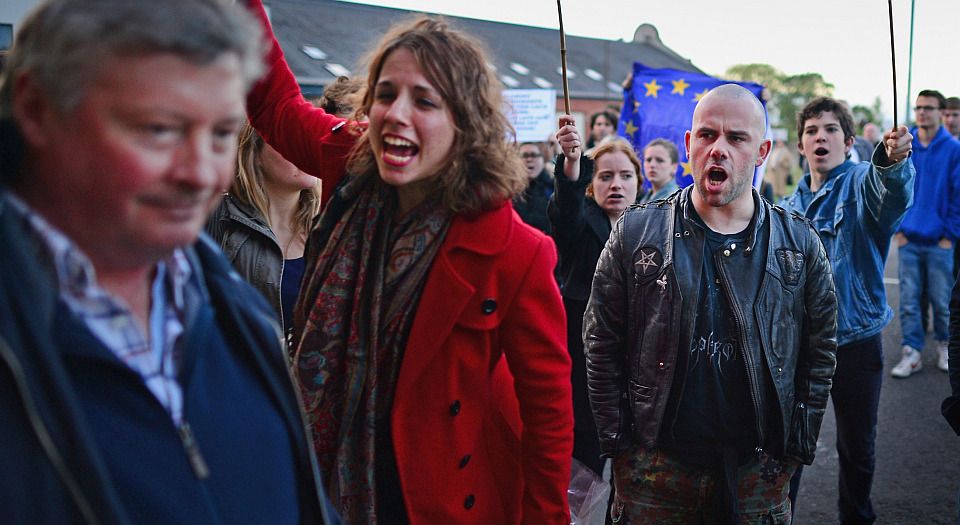 Those on the liberal left have always prided themselves on being more caring and compassionate than conservatives. People on the right, they insist, are narrow-minded and selfish, beholden to vested interests. They only care about money and themselves. They are bad people.

This is one of the most persistent myths of modern times. I’ve never believed it. Selfishness transcends politics. Those on the left are just as given as conservatives to self-interest, bigotry and dislike of people different to themselves. And, my word, over the past couple of weeks, following Britain’s vote to leave the UK, haven’t we seen just how. The illusion of the liberal-left’s inherent and exclusive capacity for compassion has truly been exploded.

Consider the recent March for Europe in London, to demand that the will of the people be revoked and that corporate-backed oligarchy be restored. Rich, metropolitan types have shamelessly complained about the result because their holidays in Europe will henceforth become more expensive. They fear for their second homes in Tuscany and the south of France. People have been saying this openly. The burghers of north London fear they might no longer get dirt-cheap nannies and au pairs from Eastern Europe. They fret about the staff on the sainted NHS, staff trained at the expense of poorer countries who we in the UK have since hired on the cheap. Corporate types fear for the future of immigrant workers, those magnificently exploited souls who live six to a room on three-month contracts being paid a minimum wage or less. Such outrageous displays of greed haven’t been witnessed since the heady days of Thatcherism.

Consider, too, the ceaseless insults hurled at the stupid, poor white people who voted to leave the EU. These are folk who struggle to maintain a first home, let alone a second – people who can barely afford to go on holiday at all. These are the fishermen, from Aberdeen to Hull to Ramsgate to Hastings to Cornwall, whose livelihoods have been devastated by the EU – the same fishermen taunted by Bob Geldof and his champagne-swilling chums. These are the people living in Peterborough and Boston who can’t get doctor’s appointments or find school places for their children because hospitals and schools are overwhelmed.

These are people whose small businesses have been ruined by Operation Stack in Kent, whereby lorries clog up the roads for miles, the result of Schengen Area free movement that has led to the mayhem in Calais. Consider those people in Wales who faced the daily, humiliating reminder that their economy was dependent on hand-outs from the EU. Consider, too, all these English people in Dover and Folkestone who know Poles and Latvians, not as cheap domestic staff but as neighbours, parents of their children’s schoolfriends, as equals. All these people slandered as vermin and racists.

The metropolitan left sneered at them from their secluded London villages or their homes in rural Derbyshire. Cloistered writers and academics seem oblivious to the negative effects of the EU, not least because none has experienced first-hand the adverse effects of EU policy. No newspaper editor has opted for a cut-price, cutting-edge columnist from Romania. As for people working in the building trade, in decorating, in plumbing, I can introduce you to many who have been undercut or seen their businesses go under. There are countless here in Kent who have left costly and crowded London for that reason. If you have a house, a mortgage and children to look after, you simply can’t live as a footloose twentysomething singleton with no responsibilities.

I’m not sure how much the liberal-left realise just how repellent their brattish behaviour has been. But this has been coming for some time. Ever since the libertine cultural revolution of the 1960s, Labour and the orthodox left in the Western world have been in a long process of abandoning the working class, withdrawing into identity politics, rights for the self, for affirmation of the self. Hence, so-called progressives now care above all for their image as ‘good people’. Virtue signalling is the epitome of the new faux-compassionate, egocentric left.

Hence the needy rhetoric about ‘the world hating us’ for leaving the EU, the exhortations to ‘hug an immigrant’ or wear safety pins to boast of one’s non-racist credentials. Everything’s about ‘me’. The liberal-left couldn’t understand why people would vote in the name of abstract principles such as ‘democracy’ or ‘freedom’ or ‘self-determination’, because they view everything in terms of their own money and their own public image.

There was a time when it was Tories who sneered at the poor, who deplored them as stupid and feckless. This was in the loadsamoney era of the 1980s, during which the market ruled and we were beholden to the whims of capitalists and the sainted market. There was even a time, many years ago, when the left spoke of principles, of democracy and liberty. How the roles have been reversed. How strange that it’s mostly conservatives who now talk in abstractions, and it’s the left that obsesses about the markets and worry about the FTSE 100, about their own money. They oppose democracy. They hate the poor and the old. They are despicable.

Keeping calm and carrying on

At a library in Canterbury on Wednesday, I struck up a conversation with an Italian of Berber extraction. He, like many others immigrants in Britain, I suspect, didn’t care for the language of the Brexit movement, regarding it as xenophobic. Yet he did support the vote to leave. He was a far-left, Podemos-supporting type, and he proceeded to explain in conspiratorial tones how corporations and oligarchs exploit the common man. He said he hoped Britain leaving would ‘create a spark’ that would start revolutions in other EU countries.

He, too, was tired of the talk of imminent economic collapse. We’ve been hearing about this on a daily basis for about a year now, from people who wish it so for selfish, ideological reasons, and we’re all bored of it. Maybe it will come. But, at the moment, there is no palpable sense of panic in the UK.

Lynx versus the prigs

Lynx, the deodorant brand, has dropped its famous and allegedly ‘sexist’ adverts. This is idiocy. It was always clear they were meant to be ironic and self-mocking, ridiculing the idea that the path to sexual conquest begins with a spray-can procured from Boots. Have we become so priggish that even self-mockery is dead?