Brexit: this was a vote against bigotry, not for it

The people have rebelled against the bigotry of the elites. 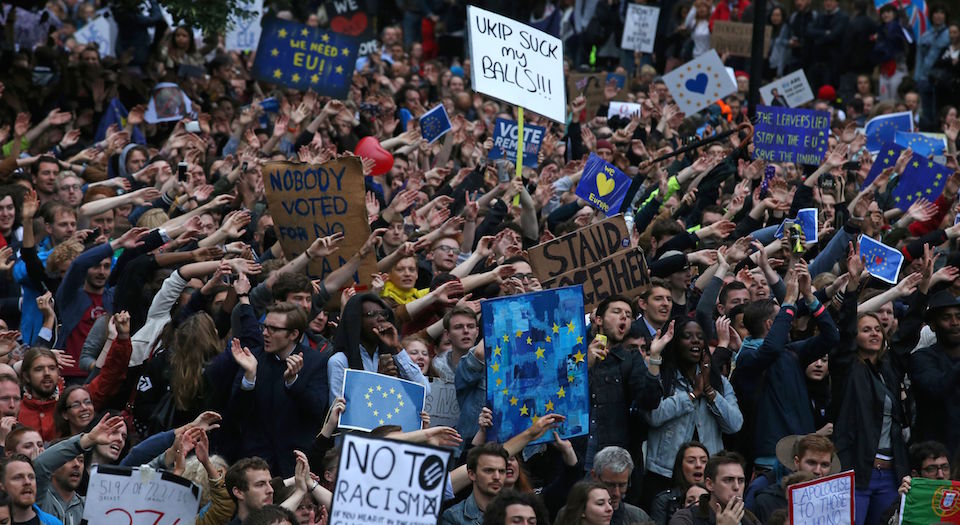 What is a bigot? That term is now so overused — to describe everyone from foreigner-hating skinheads to feminist academics who question transgenderism — that we have lost sight of its meaning. It’s now basically a stand-in for ‘unpleasant’, deployed against people we simply don’t like or understand. But bigot has a very specific meaning. It doesn’t mean gruff or un-PC or even ‘worried about immigration’. It means, as the Oxford English Dictionary spells out, ‘intolerance towards those who hold different opinions to oneself’. A bigot is someone who is so ‘obstinately and blindly devoted to his own church, party, belief, or opinion’ that he comes to loathe those of a different church, party, belief or opinion. Which raises a pressing and intriguing question: in Britain’s EU referendum debate, who, really, are the bigots?

The narrative pumped out by most of the media and political set, before the referendum and even more intensively after it, says that Brexiteers are the bigots. They voted for hate and xenophobia, apparently. Brexit was ‘fuelled’ by bigotry, says one observer, specifically ‘bigotry on the basis of national origin’. It was a ‘vote for hate’, pro-EU protesters claim. The victory for Brexit means ‘prejudice [and] xenophobia’ have ‘won out over common sense’, says one columnist. All the talk among the well-connected of how out of sync they now feel with Britain, and how scared they are of the bigotry now finding public expression, is meant to give an impression of them as progressive and the others — the 17.5million people who voted Leave — as backward, hateful, possibly dangerous. Remainers are against bigotry, Leavers are for it — right?

This is an almost perfect inversion of reality. If we are talking about blind and obstinate devotion to a certain outlook, and a corresponding intolerance for those who hold different outlooks, then it is the Remain campaign and its media and political backers who have behaved as bigots. Their intolerance of the opposite side, of the masses who voted Leave, has been alarming. They have written them off as ‘low information’, racist, overemotional, lacking the expertise required to make big political decisions. ‘The chavs have won’, as one Glastonbury attendee told The Sunday Times. These people are ‘mindlessly angry’, says one observer. They are ‘ignorant’. They are so lacking in basic nous and intelligence that they are ‘ripe for canny right-wing operators to manipulate’. The leaders of Leave ‘lifted several stones’ to let these kind of views out, said one columnist, as if Leavers are insects. ‘It is as if the sewers have burst’, said another, as if they are shit. Newspaper cartoons have depicted Leave advocates as rats vomiting into the sewer of public opinion, and as dogs salivating at their computers.

You want to see bigotry? Look at all of that. It has been explicit and relentless and extremely ugly. After the referendum in particular, the media set has engaged in a great, long sneer at the hoodwinked idiotic public, looking with contempt, or even worse, pity, at the knuckle-draggers who have apparently destroyed our nation. Such is their intolerance that many are now demanding either that a second referendum be held or that the result simply be overturned. At a pro-EU — but really just anti-democratic — gathering in Trafalgar Square, where people held placards slamming white people and old people, a lawyer said from the platform that there is too much ‘mass confusion’ for decisions like this to be made by the public; instead they must be made by politicians.

That is bigotry. This intolerance for people who are different, the smearing of them as morally ill-equipped for political life, the depiction of them as animals, the attempt to override their political desires — that is the living, breathing definition of bigotry, of ‘intolerance towards those who hold different opinions to oneself’. Observers have casually asserted that Leavers are bigots, who hate immigrants, but the facts do not bear this out: a post-referendum ComRes poll found only 34 per cent of Leave voters gave immigration as their main concern, where 53 per cent said Britain’s ability to write its own laws was their big issue. And yet even as the media elites make their unconvincing assertion about a vast swathe of British society being bigoted, they openly express bigoted views of their own, against the poor, the old, the white working class, chavs, the mindless mass of society. It takes a special kind of chutzpah to denounce your opponents as bigots even as you partake in bigotry.

Indeed, it has become clear in recent days that the worst bigotry in Britain right now is the ‘anti-bigotry’ of the liberal elite. It is through posturing against the alleged bigotry of the little people that the political and media classes express their own bigotry. Their obstinate devotion not simply to the EU but to the idea that their way of life is superior to poorer people’s way of life, that their political and cultural outlook is better than yours, has made them alarmingly intolerant of political and moral difference. It has made them bigots. This explains why so many leading Remainers have responded with such anger and shrillness to the referendum result: because their starting point is moral obstinacy, not openness to debate or democratic change. One of the most rewarding things about this whole process is that it has exposed the hollowness of the political and media elites’ PC platitudes. The veil has been torn aside, and we can now see the utter emptiness of their claims to care for ordinary people, to consider all views equally valid, to want to listen to us and empower us. In truth, they are bigoted towards us; they wish we would not speak.

And it is precisely this bigotry of the elites that many poorer and working-class people will have decided to strike against in the referendum. They seized an opportunity to protest against an establishment which for too long has treated them and their way of life with contempt, which has sneered at them for being too fat, unhealthy, bad at parenting, overly obsessed with flags and football, and basically unpleasant people in need of correction from on high. People kicked back against that. They protested against elitist intolerance and disdain for their way of life. Here’s the thing: their vote against the EU was far more a vote against bigotry than for it.