A blasphemy trial for today

John Osborne’s play about George Holyoake, the last man to stand trial for blasphemy in England, continues to resonate. 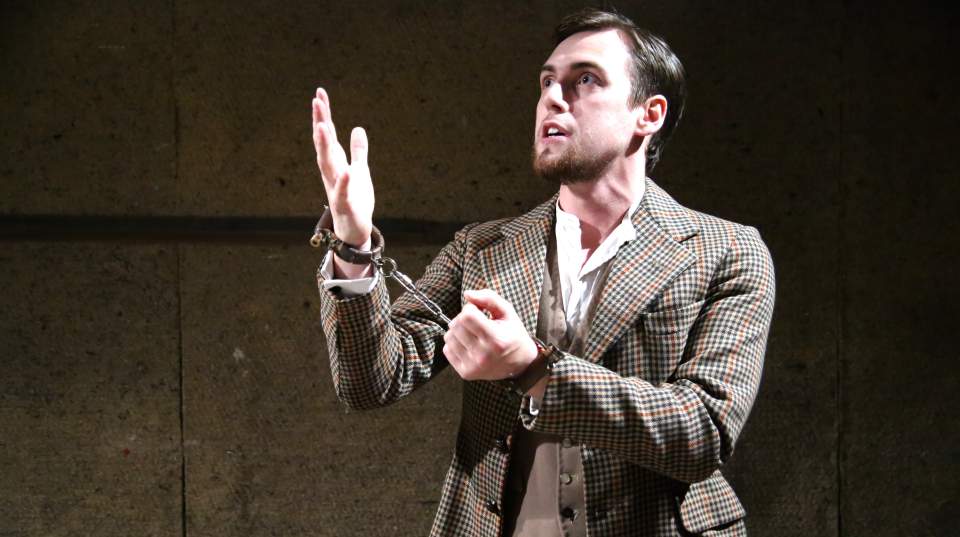 Last month, Brompton’s Finborough Theatre hosted the London premiere of John Osborne’s play, A Subject of Scandal and Concern, first written for television in 1960. It is based on the true story of George Holyoake (1817-1906), the last man to stand trial for blasphemy in England.

Holyoake, a disciple of the socialist Robert Owen, became the editor of the first avowedly atheistic periodical published in Britain, the Oracle of Reason (or Philosophy Vindicated), after its founder-editor Charles Southwell was arrested for blasphemy. On 24 May 1842, Holyoake delivered a lecture in Cheltenham, during which he answered a local preacher’s question about God’s place in a socialist community. According to reports, Holyoake responded that he thought the people of England ought not to have any religion. ‘For my part I am of no religion at all’, he continued, ‘I don’t believe there is such a thing as a God’. And then, addressing the problem of poverty, he concluded: ‘If I could have my way I would place the deity on half-pay as the government of this country did the subaltern officers.’

For expressing these opinions, Holyoake spent six months in prison. Those who had attended the lecture appealed to the then home secretary, arguing that ‘free discussion was equally beneficial in the departments of politics, morals and religion’. But it was to no avail.

After serving his sentence, Holyoake, alongside Emma Martin, a socialist, formed the Anti-Persecution Union to support free thinkers threatened by arrest. And, after the folding of the Oracle, he founded the Reasoner, in which he first developed the concept of ‘secularism’, even coining the term in 1851. Holyoake devoted most of his later career to promoting the working-class co-operative movement and writing history books. Londoners can still see his name inscribed on the lower section of the Reformers’ Memorial in Kensal Green Cemetery, or visit his grave in Highgate Cemetery, where it lies behind George Eliot’s.

Osborne’s adaptation of Holyoake’s ordeal is largely a courtroom drama focusing on his trial and imprisonment, with most of the dialogue drawn directly from historical record. As the play opens, Doron Davidson’s narrator informs the audience that they ‘will not really be troubled with anything unfamiliar’ – prophetic words indeed in light of the contemporary authorities’ obsession with prohibiting online ‘hate speech’, and explicitly protecting religious minorities from offence.

Osborne’s play opens on a May day in 1842, as Holyoake, played by Jamie Muscato, is walking from Birmingham to Bristol to visit a friend imprisoned for having established an ‘improper’ journal. The narrator tells us that, while Holyoake was not a gifted public speaker, ‘he persisted, and for some reason, so did his audience. Besides, there was a considerable shortage of speakers on the subject.’ The subject, it turns out, was socialism, or as it was described in the Cheltenham Chronicle at the time, ‘devilism’. Muscato’s stand-out performance realises the doggedness and resolution of Holyoake in his defence of free discussion, ‘a man who wore a soul of his own in his bosom – and did not wait till it was breathed into him by the breath of fashion’.

The audience occupies the position of a jury throughout most of the play, while magistrates, prosecutors and defendants debate the question of Holyoake’s guilt. Holyoake stands accused of giving utterance to ‘sentiments which are an insult to God and man’. The magistrate (Richard Shanks) tells Holyoake: ‘Whether you are of no religion is of little consequence to us, but your attempt to propagate the infamous sentiment that there is no God is calculated to produce disorder and confusion and is a breach of the peace. The entertaining of opinions is not opposed to law if people keep them to themselves.’

In act two of this short, three-act play, Holyoake defends himself against the charge that he, ‘in open violation of the laws’, and to the ‘great scandal and reproach of the Christian religion’, did wickedly and profanely intend to bring Almighty God, the Holy Scriptures and the Christian religion into disbelief and contempt among the people of this Kingdom’. To modern ears, the charges seem rather preposterous and antiquated. But substitute the Prophet Muhammad, or the Koran, for Almighty God or the Holy Scriptures, and the modern parallels become clear. Victorian-era common law finds its counterpart in today’s political correctness and strictures against hate speech, religious or otherwise.

Holyoake, acting as his own counsel, cross-examines the key witness for the prosecution, a printer named Bartram. Bartram is challenged to explain why he thinks Holyoake’s words were blasphemous. He replies that ‘they revile the majesty of heaven and are calculated to subvert peace, law and order. They are punishable by human law because they attack human authority.’ Holyoake counters that the evidence is manifestly insufficient to prove malice. Since the intention of a blasphemous libel constitutes its criminality, and since conscientious words are allowable, the charge amounts to a demand that the defendant be bound by a contract to think as his accusers do. ‘If I asked you to give up your belief’, pleads Holyoake, ‘you would think it impertinence and if you punish me for not giving up mine, how will you reconcile it with “doing as you would wish to be done to”?’ To this Justice Erskine responds with a defence of the law: ‘If it be done temperately and decently’, all men are at liberty to state opinions. Holyoake replies that this liberty is a mockery: ‘The word temperate means what those in authority think proper… What is this temperate? What is intemperate? Invective, sarcasm, personality and the like. But these weapons are denied only to those who attack the prevailing opinion.’ The contemporary parallels are clear. Who, for example, defines what is ‘hate speech’? Who decides what is ‘offensive’?

In A Subject of Scandal and Concern, Holyoake addresses the crux of the issue of blasphemy, which is that the law regards the belief in God to be the foundation of obedience among men. Holyoake does not deny the goodness that is in [religion] but rejects the way that it encourages passive obedience, appealing to fear in individuals, and ‘offering an investment instead of a contest’.

Bartram’s reasoning bears striking resemblance to the thinking of those who defend hate-speech laws, religious or otherwise. That is, he makes constant reference to the illegality of the speech in question. This seems to be a case of circular reasoning: when asked exactly what constitutes ‘hate speech’, the reply is ‘illegal forms of speech’, and when asked why these kinds of speech are illegal, the answer is that they are hate speech. Only the concept of incitement lends this definition some vague semblance of content, yet incitement also assumes adult individuals are not responsible for their own actions, since other people are apparently to be blamed for making them do things. Thus the legal concept of incitement actually undermines a key underpinning of criminal law: that individuals are responsible for their own behaviour.

But then assaults on freedom of conscience and speech are almost always underpinned by a condescending view of the public, who are portrayed as vulnerable and in need of protection. So in A Subject of Scandal and Concern, Justice Erskine tells us that Holyoake will be ‘imprisoned… for six calendar months’, for ‘uttering language’, and doing so with ‘improper levity’. It is not the job of the law to protect the character of the Almighty, says Erskine, but to protect the people from such indecent language.

As well as marking the theatrical premiere of A Subject of Scandal and Concern, this year also marks the 60th anniversary of John Osborne’s most famous work, Look Back in Anger, which had itself been a subject of scandal and concern when it rocked British theatre back in 1956. Author Alan Sillitoe remarked that Osborne ‘didn’t contribute to British theatre; he set off a landmine and blew most of it up’. Others labelled Osborne a ‘hater’ of class distinctions, and dismissively mocked the play as ‘Look Back in Hate’.

Admittedly, Osborne’s protagonist Jimmy Porter is a loud, rude, obnoxious, violent, angry young man. And yet Osborne finds a way of making Porter’s idiosyncratic, dyspeptic voice not only theatrically viable, but also nationally and culturally resonant. In Porter’s own words, ‘Anger is not hatred, which is what I see in all your faces… it comes into the world in grief, not grievance… Anger is slow, gentle, not vindictive and full of spite.’ Look Back in Anger mixed past and present in ways that captured a pivotal moment in the history of England. Porter was not an obvious hero for audiences; rather, he allowed them to explore the issues that were then dividing post-imperial Britain. Osborne’s impact on British theatre can still be felt today. Nowhere is this more true than in A Subject of Scandal and Concern. To passionately object to aspects of class, culture or religion that stifle and constrain the human spirit is not necessarily hatred, and defining it as such will only serve to criminalise the brand of righteous anger that has always been a stimulus to progress.

In his defence, Holyoake chided his contemporaries for lacking the moral courage to practice openly the religious persecution they pretended was long gone, even as they were busy resurrecting it. The same could be said of those too feeble to admit that compelling ‘respect’ for religion is anything but a formula to bring back an antiquated form of tyranny.

Terri Murray is director of studies at Hampstead College of Fine Arts & Humanities, London. She is the author of Thinking Straight About Being Gay: Why it Matters if We’re Born That Way (2015). (Buy this book from Amazon(UK).)