Labour: for the EU, against the people 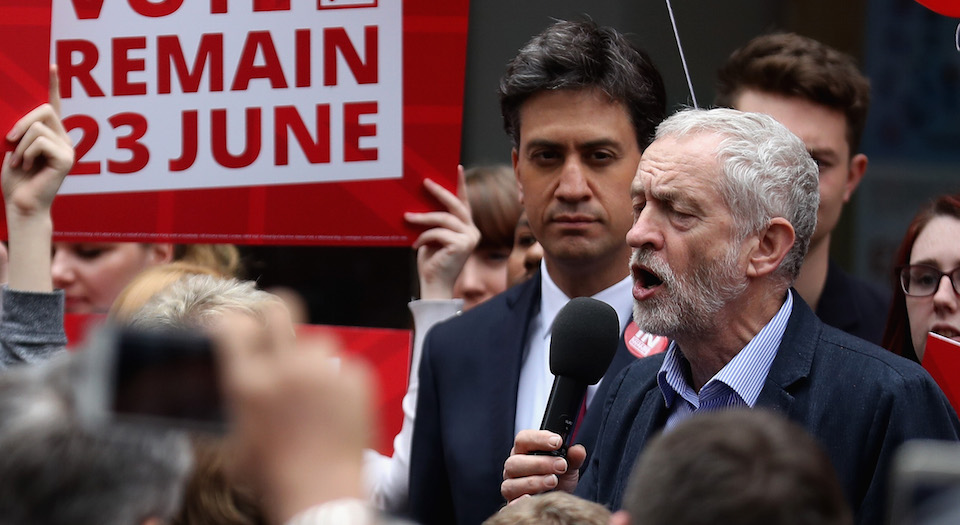 Workers’ rights are not safe unless the UK stays in the EU. This is the message put out by the Labour Party. Effectively, it is arguing that the British people cannot be trusted at the ballot box. Give them the freedom to elect a government, with real power, and they may choose the wrong government that passes the wrong laws. Wisdom, in the eyes of Labour, lies not with the people, but with bureaucrats based in Brussels.

Harman’s approach to workers’ rights is now mainstream in the Labour Party, but it wasn’t always this way. In the European referendum of 1975, a significant section of Labour campaigned to leave what was then the European Economic Community (EEC). In a BBC Panorama debate on the eve of the referendum, left-wing MP Tony Benn claimed that those campaigning to stay in the EEC were ‘asking the British people to destroy democracy’. Benn claimed that if ‘you cut the umbilical cord that links the lawmakers with the people, you destroy the stability of this country’.

Benn understood that democracy requires an unmediated relationship between the people and its lawmakers. In a democracy, there can be no required laws and no laws that are beyond reform or repeal – the people must be sovereign. But this approach is anathema to the Labour Party today, which celebrates the fact that Benn’s umbilical cord has been cut by a slew of directives and regulations imposed by the EU.

The EU’s curtailment of UK democracy was a theme that Benn returned to throughout his long political career. Speaking in parliament against the Maastricht Treaty in 1991, he criticised those who ‘genuinely believe that we shall never get social justice from the British government, but we shall get it from Jacques Delors; they believe that a good king is better than a bad parliament. I have never taken that view.’

Benn referred to Jacques Delors, president of the European Commission between 1985 and 1995, because he did much to persuade the trade unions to support the EEC. In a speech to the Trades Union Congress in 1988, Delors stressed ‘the social dimension’ of what was to become the EU’s single market. The trade unionists, desperate for some good news, gave Delors a standing ovation and a chorus of ‘Frère Jacques’. The speech marked the point at which the trade unions ceased to see the EEC as ‘a bosses’ club’, which supposedly promoted free markets, and began to see it as a means to secure social justice.

Although the Labour Party had fought the 1983 General Election on a promise to pull out of the EEC, the Delors speech hastened the demise of Labour’s Euroscepticism. It persuaded many to do what Benn warned them not to do: to believe that a good king was better than a bad parliament. Jacques Delors, unelected by the British people and overseeing the Brussels-based elite, promised a ‘social Europe’ agenda, exemplified by measures such as the Working Time Directive.

By 1988, the elected UK parliament had produced three Thatcher governments, and, by 1993, it had produced a fourth consecutive Conservative administration. Eighteen years of Conservative government had a profound impact on the Labour Party. The sudden decline of its Euroscepticism was but a symptom of a greater malaise: its disconnection from ordinary people.

In 1975, Benn saw the danger of cutting the umbilical cord between lawmakers and the people, but, after the Delors speech, Labour had cut ties between itself and the people. After 1988, Labour began to cement its disconnection from ordinary people by forming a new relationship between itself and the EEC. Jacques Delors kick-started it, John Smith developed it, Tony Blair celebrated it, Gordon Brown lived with it and Jeremy Corbyn can’t campaign without it.

Under John Smith’s leadership (1992-1994) the Labour Party developed its pro-EU stance and ushered in Jacques Delors’ vision of Europe – a single market with social protection. This was a reflection of the kind of Britain that the Labour Party wanted to administer. Smith castigated the then prime minister, John Major, for wanting to turn Britain into the sweatshop of Europe and for trying to compete against Taiwan on wages rather than against Germany on skills. Smith’s message was that Britain needed Europe and its institutions to modernise.

Tony Blair’s pro-Europeanism helped to bring Labour electoral success, but its appeal to ordinary people was limited. Signing up to the European Social Chapter gave British workers the type of benefits that Delors had tempted them with, but Blair’s pro-Europeanism was unable to bring dynamism to the UK economy. Moreover, it harmed Labour’s relationship with ordinary people, particularly as the single market brought with it an influx of migrant workers from eastern Europe.

The true beneficiaries of the social chapter, and of all the regulation that came from the EU under the Blair and Brown governments, were not the working class, but the middle managers and bureaucrats whose jobs depended on regulating things, not producing them. Hence, the deceit at the heart of Harman’s argument – if EU-inspired laws were sufficiently popular, their survival wouldn’t depend on the EU directives that put them beyond the ballot box. Labour’s pro-Europeanism may have helped it electorally, but only by enabling it to foster links with a European elite that came at the expense of a proper relationship with the public.

All Labour leaders since John Smith have been committed to the EU. Even Jeremy Corbyn, who campaigned with Tony Benn against the EU over four decades, is now campaigning for Remain in the upcoming referendum. Those who claim that Corbyn has been forced by his Labour colleagues to accept the EU against his better judgment fail to appreciate the extent to which, having abandoned the people after 1988, Labour has become a party that reflects the interests of a European elite. All the left-wing causes that Corbyn celebrates – environmentalism; promoting human rights; and securing free movement – are causes that resonate most with a Guardian-reading, latte-drinking, metropolitan elite. These are the sort of people whose careers and futures are often linked to the EU and the regulation that it spawns. Labour’s shadow home secretary, Andy Burnham, can criticise the Remain campaign for being ‘too much Hampstead, not enough Hull’, but that’s the nature of the European project.

Tony Benn was right to note the destructive impact of cutting the umbilical cord between lawmakers and the people, but he failed to foresee how that destruction would impact on Labour as well the country. The chasm between Labour and its supporters is huge, with some polls suggesting that 40 per cent of Labour supporters will vote Brexit, compared to only four per cent of Labour MPs.

The outcome of the EU referendum may be uncertain, but the future of the Labour Party is not. Its pro-Europeanism gave it a boost after 1997, but, having tied its fortunes to a European elite rather than the people, it now stands exposed as the party of the metropolitan elite. Labour can bang on all it likes about needing the EU to safeguard workers’ rights. But every time it celebrates EU legislation over UK legislation, it’s recognising one thing: it no longer has the capacity to win the people’s support for legislation through the ballot box. Labour gave up on the ballot box decades ago, and the people are now using the ballot box to trash the Euro-elite that Labour stands for.

Jon Holbrook is a barrister. He will be speaking at the De Beauvoir Balloon Debate, Britain, Europe and the EU on Wednesday 22 June. Follow him on Twitter: @JonHolb