The war on ‘dead white dudes’

The 'decolonise the curriculum' campaign is a threat to universalism. 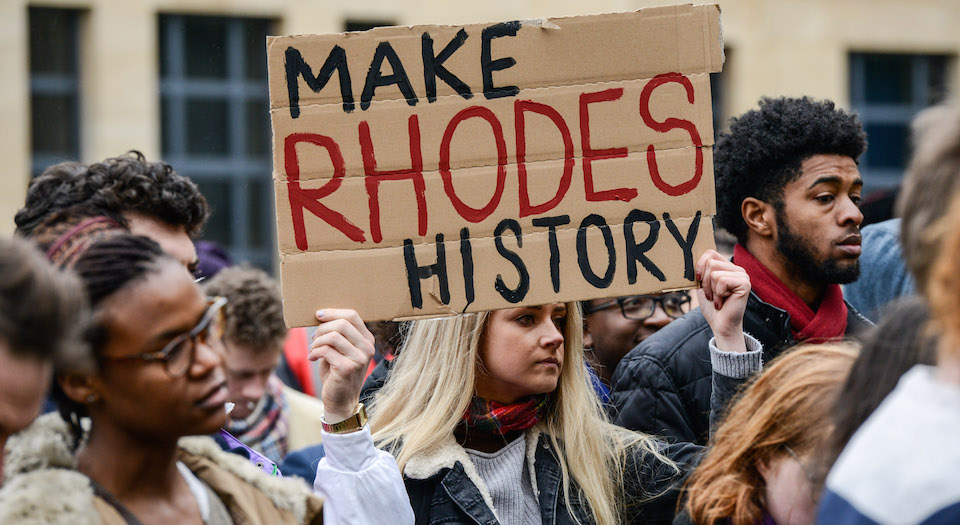 The demand for universities to ‘decolonise’ has become one of the central tenets of the identity-driven student protest movement. It has driven a cleansing of ‘colonial iconography’ in the form of statues, pictures and the names of buildings. It has also turned the spotlight on what is taught in higher education, with the call to ‘decolonise the curriculum’.

The group Rhodes Must Fall Oxford, campaigning for the removal of the statue of Cecil Rhodes from campus, aims ‘to challenge the structures of knowledge production that continue to mould a colonial mindset that dominates our present’. The Why is My Curriculum White? movement argues: ‘Universities in the UK have operated under a colonial legacy, perpetuating “whiteness” both structurally and in the confines of knowledge reproduced.’

In the US, students at Yale University are calling for the English department to abandon a course requirement to study authors such as Chaucer, Shakespeare and Milton. They argue: ‘It is unacceptable that a Yale student considering studying English literature might read only white male authors.’ Meanwhile, at Seattle University, Jodi Kelly, the dean of Matteo Ricci College, has been ‘put on leave’ after a group of students staged a sit-in, protesting that the ‘liberal-arts curriculum focused too much on classical Western history and philosophy’. One student claimed, ‘the only thing they’re teaching us is dead white dudes’.

The rhetoric of these campaigns suggests universities are the last bastions of imperialism and that institutions in Britain are adamantly clinging on to an empire long since surrendered. The claim that there are too many ‘dead white dudes’ suggests academics are complicit in promoting a prejudiced view of the world and that the content of degree-level courses has remained unchanged for decades. Above all this sits the image of student campaigners as either valiant warriors tackling a conservative academy or, in much media coverage, as over-privileged ignoramuses.

The reality is very different. It is academics, not students, who have rejected traditional bodies of subject knowledge and have questioned the dominance of dead white men in the curriculum. It is academics who first argued the university is an ‘academic-military-prison-industrial complex’ in need of ‘dismantling’. Today, all British universities are expected to promote ‘global citizenship’ and to ‘internationalise the curriculum’ by ‘providing students with global perspectives of their discipline’.

Despite their bravado and unashamed philistinism, student campaigners are pushing at an open door. Far from clinging on to tradition, the academy has already gone a long way towards replacing ‘dead white dudes’ with the ‘values and skills [needed] to operate in diverse cultural environments’. In the UK, academics who are members of UCU, the lecturers’ union, have welcomed student campaigns to decolonise education – they had already rejected the notion that the university should play a role in preserving, transmitting and developing the intellectual and cultural capital of the nation.

That academics and students in the world’s most elite universities should be so keen to ditch ‘dead white dudes’ in favour of ‘values and skills for diverse cultural environments’ speaks to more than just philistinism. It suggests a self-loathing, a hatred for the values that have built the modern Western world and a desire to replace social and scientific progress (that has produced global benefits) with more modest and relativist goals of respect and recognition. Today, the word ‘university’ serves as an embarrassing reminder of universality; the Latin and Old French origins of the word suggest ‘entire’, not just in reference to all knowledge, or all members of the academic community, but to knowledge that was universally true and of relevance to all humanity.

In the rush to decolonise education, and rid the syllabus of ‘dead white dudes’, campaigners forget that the insights and advances made by these past intellectual giants have had an impact that goes way beyond the specific category of ‘white men’. It makes no sense to talk about introducing ‘diverse cultural perspectives’ into teaching or the pursuit of knowledge. Scientific principles and mathematical equations, for example, are universal; they are only held to be true if the results hold irrespective of time, place or the person doing the testing.

Although, in the past, the majority of scientists were middle-class white men, the knowledge of the world they uncovered transcends their identity group. That the advances made by the likes of Newton, Einstein, Darwin and Faraday are not culturally specific is evidenced by the number of people around the world who daily board airplanes, drive cars, undergo surgery and use computers.

That knowledge can convey universal truths about humanity, and can speak to more than the narrow identity group of the originator, goes beyond science – it holds for art, music, literature and philosophy, too. This idea of people as equal, with shared experiences, emotions and interests, explains the enduring legacy of works by ‘dead white dudes’ such as Shakespeare, Moliere, Mozart, Beethoven, Picasso and Caravaggio. Such an idea also underpins democracy, citizenship and justice. For this reason, the rejection of a ‘white’ intellectual heritage is anything but radical. Works by Immanuel Kant, Thomas Paine and Karl Marx triggered intellectual, social and political upheavals that went to the very heart of contemporary establishment beliefs.

The bizarre rush to decolonise or internationalise education pours scorn on all the major intellectual and social advances of past centuries. Today, works of literature and philosophy are not judged according to their universal relevance, their relationship to truth, or their intellectual worth, but simply on the identity of the author, with those who are most oppressed considered to have greatest insight. Many students have been taught a cheap, ad hominem form of criticism by their lecturers. As such, students’ demands for more black or female writers to be covered on the curriculum have an inevitable logic; their campaigns put into practice what they have picked up in the classroom.

Questioning the content of the curriculum is always a useful exercise, but a philistine rejection of knowledge based on nothing more than the gender or skin colour of the originator drags the university, and society more broadly, backwards. It reinforces an intellectual relativism and prevents any scientific advance, work of literature or musical score being judged as better or more valuable than another.

When academics and students abandon both tradition and universalism, they reject the university. Rather than one ‘community of masters and scholars’, we end up with a multitude of different competing interest groups, all demanding equal recognition and respect. Rather than standing on the shoulders of giants, we end up trapped in a permanent present. The call to ‘decolonise higher education’ epitomises both these trends.