The progressives terrified of change 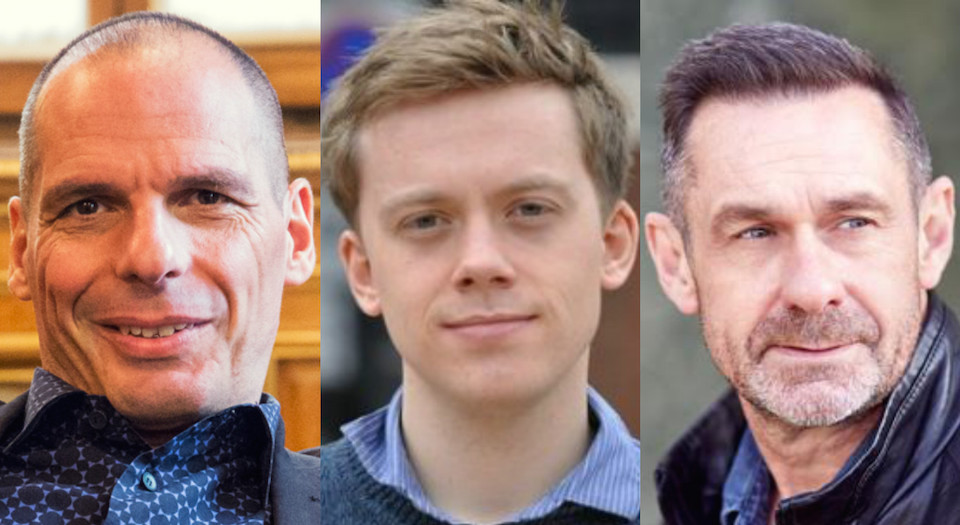 William F Buckley Jr wrote: ‘A conservative is someone who stands athwart history, yelling Stop.’ Swap ‘conservative’ for ‘media lefty’ and you’ve basically got the pathetic spectacle we’ve been confronted with over the past few weeks of the EU referendum campaign. As 23 June approaches and the polls are increasingly too close to call, the strangest thing has happened. The last few prominent Eurosceptics on the left have started to peel away. They’ve been confronted with a once-in-a-generation opportunity to smash power, to strike out for democracy and to put the future of European politics firmly in the hands of the people, rather than a faceless, byzantine bureaucracy. And they’ve bottled it.

First there’s Yanis Varoufakis, the flash stepdad of European leftism and the former finance minister of ailing Greece. This is a man who has experienced the tyranny of the Brussels set firsthand. His modest proposals for rescuing debt-laden Greece from EU-enforced austerity were ignored. ‘Elections’, he was told by German finance minister Wolfgang Schäuble, ‘change nothing’. He quit government in protest as his Syriza comrade Alexis Tsipras signed an agreement that would once again shackle Greece to Troika diktat. What is the self-styled ‘erratic Marxist’ up to now? He’s touring the UK, telling Brits to say ‘Oxi’ to Brexit so that we can ‘reform the EU from within’.

Then there’s Owen Jones, the Corbyn choir boy who has followed the Labour leader’s transformation from Bennite Eurosceptic to apologetic Remainer. Last summer Jones called for the left to campaign for Brexit. After the horrors of Greece, he wrote, it’s time to ‘reclaim the Eurosceptic cause’. Now, just 10 months on, he’s joining Varoufakis on the campaign trail. His flirtation with principle over, he wants to ‘unite with people across the continent to build a democratic, workers’ Europe’. How propping up a democracy-thwarting institution puts you in line with the little guy is beyond me. Not least when said institution has effectively abolished workers’ rights in austerity-battered countries like Greece.

But perhaps the most glaring retreat of them all has come from Paul Mason. The former Channel 4 economics editor and ‘radical social democrat’ actually had the brass to pen an article titled ‘The left-wing case for Brexit (one day)’. One day. Those two, trembly words sum up the sentiment of these fair-weather Eurosceptics. Yes, yes, democracy – one day. Not now. Especially when, as Mason sees it, a Brexit would allow Michael Gove and Boris Johnson to ‘turn Britain into a neoliberal fantasy island’. He’s in favour of democracy, you see, just not when the pesky demos elects a government he doesn’t like. This is hypocrisy dressed up as strategic nous.

In fact, it’s worse than that. It’s often said that the shift in left-wing attitudes towards the EU over the past few decades has been the result of pure political contingency. When, in the 1970s and 80s, the EU was seen as an avowedly capitalist project, Labourites and trade unionists took arms against it. Now that it’s been given a social-democratic lick of paint, replete with talk of workers’ rights and free movement, it gets the nod. But there’s something even more sickening going on here. These turncoat Remainers, these radicals for the status quo, don’t just bristle at the turn of public opinion, on economics or migration – they’re scared of it. Their Brexit-phobia is really a fear of the demos itself.

You see this in their panic-stricken talk of the furies Brexit might unleash. ‘We don’t know… how the plebeian end of the Leave campaign will react if they lose. My instinct says: badly’, writes Mason. Varoufakis, meanwhile, is even more pessimistic. Only fascists and racists, he says, will profit from the demise of the EU. A Brexit now would mean ‘anti-migrant racism, pandered to by the political establishment for decades’, writes a commentator in the New Statesman. There is constant talk of chaos. Democracy is seen not only as disagreeable, but as dangerous. The left, once intent on stirring the passions of the people, now wants to keep a lid on them at all costs.

This is why you shouldn’t take the left appeals to ‘reforming the EU from within’ seriously. Not only because Cameron’s paltry renegotiation revealed an EU incapable of making even minor concessions. Not only because the only salient proposal Varoufakis’s Democracy In Europe Movement has managed to come up with is livestreaming council meetings. But because the cowardice of the left in the face of Brexit is bred of the very same fear of an unshackled demos that forged the European Union in the first place. Whether it was the fear of the German public following reunification or the loathing of indignant Eastern European states today, the EU has always legitimised itself using the spectre of what an unleashed demos might do – or who it might elect – given half the chance. That same fear grips the left today.

From freedom of speech to economic growth, the left has already jettisoned many of its founding principles. But the Brexit retreat is, in many ways, a more stark betrayal. The modern left’s detachment from the masses, its sneering distaste for our habits and desires, has fostered a profound fear of change itself. Their paranoia about where unleashed public passions might flow has led them to cling to the status quo for dear life. These are progressives terrified of change – and terrified of us. Faced with the opportunity to demolish an anti-democratic order, they are standing athwart, yelling Stop. History will not be kind to them.