Austria: the collapse of the elites

The presidential election captures the ebb of Europe’s political mainstream. 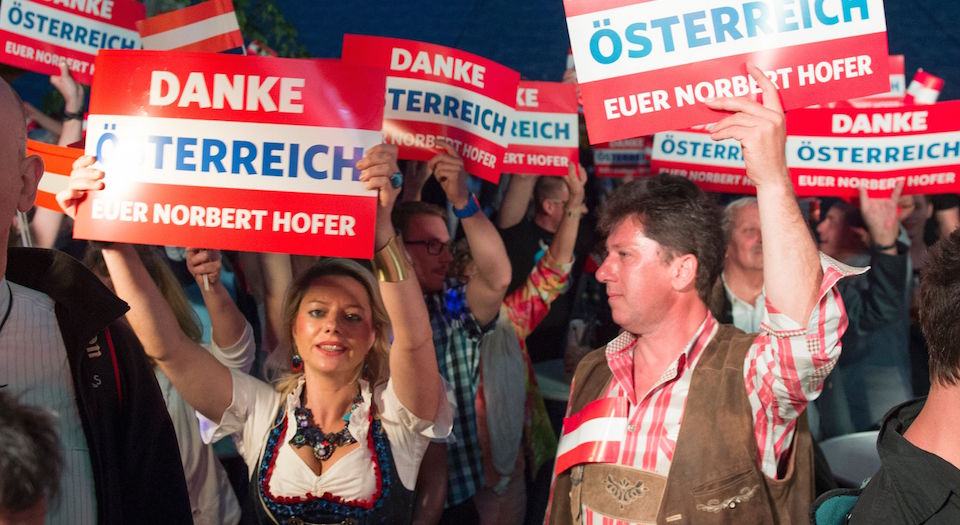 Regardless of the actual result, the Austrian presidential election, in which the far-right candidate Norbert Hofer has shaken the status quo to its foundations, tells an all-too-familiar, Europe-wide tale. Once again, we see a party-political establishment, one that has dominated postwar politics, in a state of disarray. The centre, the political mainstream, is no longer holding, no longer pulling in the vast majority of voters, no longer compelling, either out of habit or conviction, popular support. Instead, swathes of the electorate are voting against the establishment. They are turning against the elite, rejecting its seemingly progressive, multicultural, EU-ified values, in favour of something that looks right-wing, nationalist, conservative.

What the far-right, populist Freedom Party (FPO) is doing in Austria – overturning the centrist establishment comprising the Social Democrats (SPO) and the People’s Party (OVP) – has happened elsewhere in Europe. We’ve seen the Front National threaten France’s postwar establishment; Geert Wilders’ Party for Freedom frighten the Netherland’s equivalent; the Lega Nord scare Italy’s elite; and so on. In each nation, the establishment is crumbling under the weight of its own estrangement from the electorate, which, in turn, is seeking out a populist alternative.

It’s not the accepted narrative, of course. That accolade belongs to the ‘rise of the far right’ thesis, which suggests that what we’re witnessing is a far-right takeover, a surge of Nazi-sympathising grouplets intent on bearing their PR-sheened faces to the public to conceal their true, far-right teeth. We’re told that these groups have been ruthlessly exploiting the migrant crisis, scaring the public with tales of Islamist terrorists, raping foreigners and, more prosaically, welfare scroungers. And they’re winning, we’re reliably informed, because too many governments have ceded ground to their xenophobic opponents and shut the borders, pulled up the drawbridge and, effectively, legitimised their rivals.

But that story doesn’t quite ring true. For instance, while the FPO has certainly capitalised on the Austrian government’s EU-pushed response to the migrant crisis, it was already rapidly winning support a few years before the migrant crisis erupted. So, having virtually fallen apart after its Jorg Haider-inspired period in government in the early 2000s, the FPO has been steadily picking up support over the past few years. As one reporter noted in 2013, ‘the FPO has been the only party to have seen consistent gains in elections… [In the 2013 national legislative elections] the party won 20.5 per cent of the vote – an increase of three per cent on 2008, with significant gains among younger people and blue-collar workers.’ He concluded that ‘the FPO is now the strongest it’s been since its record result in 1999’. Indeed, by the Autumn of 2014, a full year before the huge migrant influx into Europe, the FPO was polling at around 30 per cent.

What we’re witnessing in Austria, in France, in the Netherlands and elsewhere in Western and, indeed, Eastern Europe is not so much a product of the far-right’s political genius, its infinite capacity to exploit popular fears of Them, as it is the collapse of the old elites. That’s why the populist surge, which is largely more right-leaning than left, predates the migrant crisis. Because it is born of the slow-motion collapse of the postwar consensus, and the internal erosion of any connection between political elites and those in whose name they have long governed. The far right hasn’t surged, then; rather, the political mainstream has ebbed – the OVP has lost the conservative vote, and the SPO the working class. As one young Viennese woman told reporters: ‘It is quite clear that the Social Democrats failed to take the worries of the working classes seriously. They have now become the largest group of FPO voters.’

The role of the migrant crisis is best understood in terms of this chasm-like disconnect between an increasingly isolated ruling elite, opening the borders according to EU diktat, and an increasingly estranged public, which experiences the prospective inflow of migrants, as an elite-ordered imposition. But it’s more than that, too. It’s also experienced as a Culture War, a conflict between the multicultural, uber-tolerant cosmopolitanism of an increasingly transnational elite, and the everyday traditions and rituals of the native populace. In this context, migrants are transformed into the weapons of elite culture, a threat to the cultural fabric of the community, agents of an unwanted cultural revolution. Hence the FPO’s leader Heinz-Christian Strache talks of the imperilment of ‘Christian-Western culture’, of the need to ‘protect Austria’s traditional community’. To the elites’ propagation of seemingly progressive identity politics, complete with its war on a whole list of -isms, the likes of the FPO offer a populist bulwark in the shape of an aggressive cultural conservatism.

The situation in Austria, in which the old political establishment has proved itself incapable of gripping either the imagination or loyalty of significant sections of the public, clearly terrifies Europe’s elites, huddled together for comfort in the EU. European Commission president Jean-Claude Juncker has been making ominous noises about the prospect of the FPO winning power in Austria. Speaking to Le Monde he said that ‘In view of the possibility of seeing a hard and pure right and far-right win, I feel obliged to say that I don’t like them. Apparently Austrians haven’t appreciated this, but I don’t give a damn: with the far right, no debate or dialogue is possible.’ Others have revived the possibility of revisiting the EU sanctions levelled against Austria when Haider won power in 1999. ‘This month [the EU] must draw the line in Austria’, wrote one pro-EU commentator. ‘Europe must make clear it will refuse to recognise a far-right president in Vienna. It’s their democratic right to elect a cleaned-up fascist; it’s ours – by treaty – to suspend Austria from the EU.’

It’s a telling sentiment. In the elite’s fear and loathing of the Austrian demos, the growing schism between electorate and establishment is writ large. Long after the dust has settled on the Austrian presidential election result, this is the story that will continue to run.